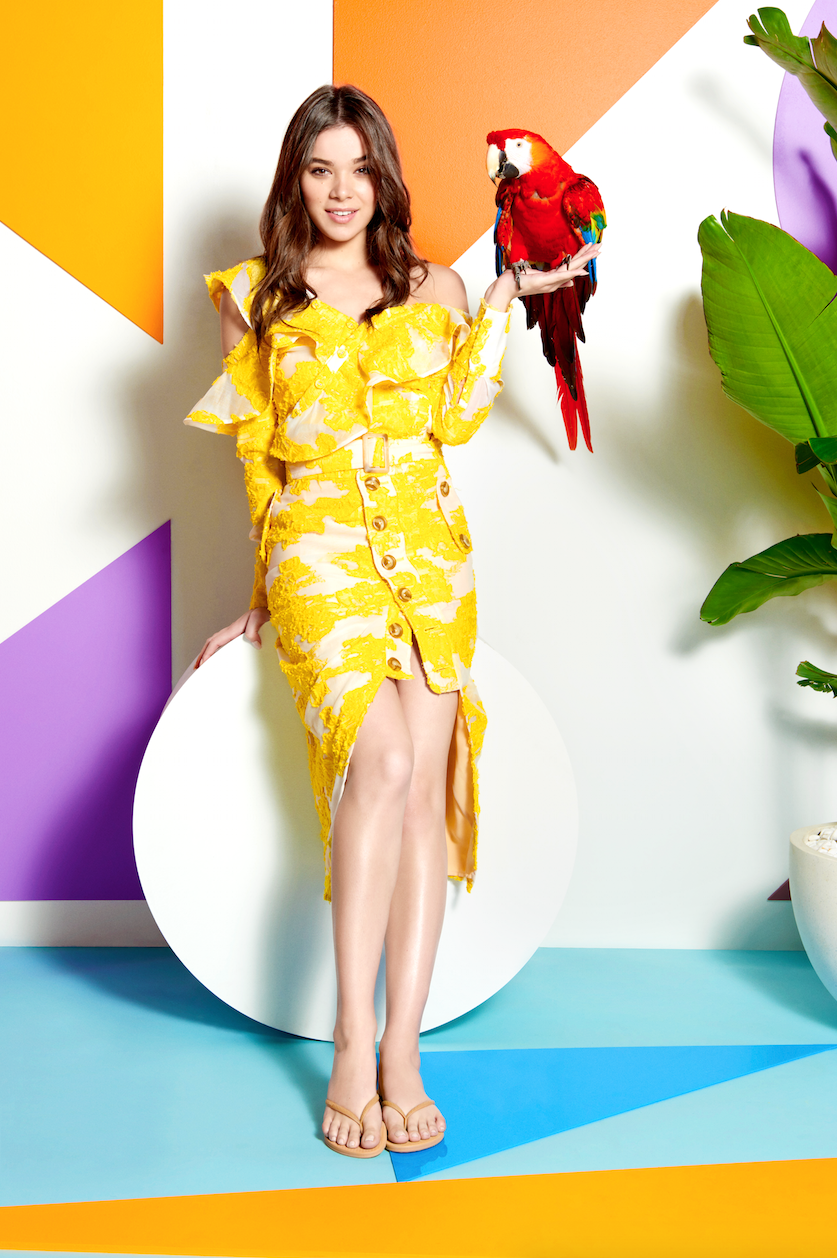 It’s challenging to even think about wearing sandals in NYC, considering the impending #snowpocalypse, but fashion darling and singer-actress Hailee Steinfeld is changing our tune. The 20-year-old beauty was in town over the weekend to promote her new Reef Escape campaign. In addition to talking happy feet, the Cali girl opened up to us about life in the spotlight, new projects—music and acting—and why posing with a parrot is no easy feat!

You’re a California girl fronting a California brand—did it feel natural to sign on with Reef?
Definitely! It’s a brand that I’ve had a lifelong connection with—it’s so timeless. I was born and raised in California and live 25 minutes away from the beach, so Reef has always been my go-to sandal.

What was growing up in the spotlight like?
It’s crazy because I’m just getting started, but at the same time I’ve been doing this for half my life. I grew up in a town outside of everything, in a quiet neighborhood with a bunch of families. I went to school up until 6th grade, and then I started homeschooling. I still live at home.

Do you remember your first audition?
I have countless audition stories, but I guess it was really a series, and still is a series, of small victories. I started my first [modeling] jobs in print and then commercials and then I had guest-starring roles on sitcoms and student thesis graduate films. Every one of those moments felt like something big was happening and it’s crazy to think that was over 10 years ago now. All of those little steps are a key to my success today.

You’re holding a parrot in one of the Reef campaign images. Scary?
Slightly terrifying, but also very exciting. That parrot was amazing and very heavy…it was very weird. I had never held a bird like that before. But it was so cool and very well-trained. It would dance when it was told to dance!

Where is your favorite beach in the world?
I was recently in the Bahamas in Nassau, which was so so gorgeous. It really felt like my first legitimate vacation—I turned my phone off and was on the beach for hours. But living so close to Malibu and being able to drive down to Point Dume or Zuma is a dream.

Many have listed you as “Best Dressed” at the Oscars.
It was absolutely amazing. Going to the Oscars for a second time six years later alone was beyond surreal. Being there in a gown that literally made me feel 10 times more of a princess than I felt the first time when I was 14 in the most gorgeous custom Marchesa princess gown was amazing.

How do you describe your personal style?
It’s constantly evolving. I love being comfortable, although sometimes I say that and then go for the most uncomfortable option, whether it’s in the shoes or how tight something is.

Who are your style icons?
I have a lot! Kate Moss, Naomi Campbell, Beyoncé, and Madonna.

What was the first award you won?
A Critic’s Choice Award for Best Breakout Artist in 2011 for True Grit. It was the craziest moment of my life. I got up there and I don’t even remember thinking about what I was going to say in advance because I don’t know if I really thought that there was even a chance, or if that wasn’t the case, if I was just so excited that it didn’t cross my mind. I got up there and my parents were both in the room and I thanked my mom and dad and my grandparents. It was very weird. What I said was so mumbled and I was so confused. All I kept thinking was, “Don’t drop the award!” Emma Stone and Jesse Eisenberg handed it to me. I was so freaked out that I couldn’t even get through what I was saying. All I could think was, “Don’t drop it and run before you start crying.”

Your music is played everywhere. What’s new on that front?
I’m working on new songs that I cannot wait to release. They’re getting very close to being in their final stages. It’s crazy because it’s sort of a never ending process in the best way possible where you feel like you can continue to be what you have. That’s where I’m at right now. I feel like what I have is so good, but part of me feels like I’m not done giving and experimenting and feeling like there is more that I can do in the writing and recording world. I also feel like the more I do it, the better I get. But it’s all coming very soon and I’m very very excited to share what I’ve been working on.

You’re also set to star in Pitch Perfect: 3!
I’m in the middle of it now and it’s going great! We’re at the halfway mark now and it’s awesome. The choreography is amazing. The music is so fun and it’s a great storyline. It’s going to be a good one!

Is it hard to juggle careers in both singing and acting?
It’s definitely a challenge, for sure. But I truly believe if you want something you can make it happen. Luckily I’m making a movie in a city that is one of the top recording cities in the world, and that’s Atlanta. I’m in the studio almost every weekend down there—I’m in there every second I can get.

What’s your favorite thing to do in your downtime?
I love what I do so much that it never feels like I’m working. I’ll go into the studio and it’s daylight and I’ll come out and it’s the middle of the night and I won’t even know that much time has passed. But real talk, being with my friends and just hanging out and doing nothing—whether that’s going to the beach and laying there for hours, or sitting by the pool listening to music, or just watching movies…just laying low.