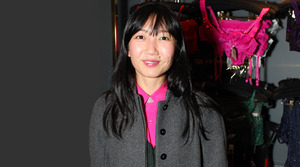 (NEW YORK) Glamour has found the worthy successor from the halls of Hearst for the executive beauty director role in wake of Felicia Milewicz‘s November 2012 departure: Ying Chu is decamping from Marie Claire to take the top-tier gig. Chu will join the 4 Times Square glossy in late January after five years as beauty and health director at Marie Claire. Chu’s industry entré was as an intern at Flare in the beauty ed’s native Canada—she was born in Shanghai, bred in British Columbia, and educated at Ryerson University. Before joining MC in 2007, Chu spent a year apiece at Vogue and Seventeen after a stint at erstwhile mag Suede, started by Chu’s former boss at Flare.

“I so look forward to evolving the beauty coverage at such a dynamic and iconic brand,” said Chu to The Daily. “There is not a more exciting place to be—or a more inspirational editor to work with. And I can’t wait to engage with the Glamour audience!” Chu will lead the mag’s beauty department, helming coverage in print as well as online.

As for the inspirational EIC in question, “I’m thrilled to have Ying on board as we go into 2013,” Cindi Leive told The Daily. “She’s the perfect person to help create a modern, aspirational image for Glamour beauty—she really understands what women want in beauty coverage, and will be brilliant at the digital part of our brand as well as in print.”

Other shifts in the Glamour beauty department in the latter half of 2012 besides Conde stalwart Milewicz’s farewell included the adieus of senior beauty editors Elaine Welteroth, who stayed in the Conde fray by moving a few floors down to Teen Vogue; Holly Siegel‘s move to San Francisco to become associate editorial director at Sephora; and beauty assistant Carrie Henderson, who left the mag to start website HeTexted.

Who’s next in line for Chu’s vacated role at Marie Claire? The mag opted to promote from within, announcing yesterday that Erin Flaherty has been bumped up from executive beauty editor, a title she’s held for two years, to beauty and health director.

P.S. More news of note in the MC realm: Byron Regej has been named design director, coming off a year and a half as senior art director at Los Angeles and reporting to recently-appointed artistic director Alex Gonzalez. Additionally, freelance writer Whitney Joiner is Marie Claire‘s new senior editor in charge of the glossy’s “Love/Sex” section. Kicking off 2013 with ample moves in media landscape; let the onslaught of intriguing masthead shuffles commence!
ALEXANDRA ILYASHOV

Equinox and Terry Richardson Go For Round Three