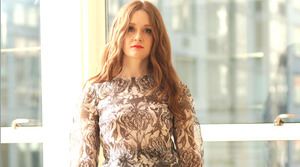 (NEW YORK) A former opera singer and aspiring doctor, Giovanna Randall’s intricately patterned pieces have caught the eye of “It” girls like Zosia Mamet and Sarah Sophie Flicker (also, Oprah!). We asked the Renaissance woman behind HONOR to see how she’s handling the applause.
BY PAIGE REDDINGER

Do you remember the first piece of clothing you designed?
I think I was about 4 years old. I found a pink balloon on our back porch and brought it to my dad, who’s an architect. I went into his office and was like, ‘Dad, I really want to make this into a dress for a fairy!’ He helped me figure out how to stitch it together with twine.

You went from singing opera to studying medicine to launching your own fashion line. Please explain!
I think I’ve always been an experiential learner. I just never realized that fashion should or could be my career. It was just something I did without thinking about it. When I was singing, I was always obsessed with my costumes and I’d make things the night before. When I was pre-med, I was always making clothes while I was studying to just kind of balance it all out in my mind. All science was too much, and all art was too much. My husband, who was my boyfriend at the time, was like, ‘Why don’t you just do what you do, and go to FIT?’ And that’s how I ended up here today.

How long were you studying medicine?
I studied opera and then I auditioned for Broadway shows. Then I wanted a day job, so I went pre-med. I was in the two-year post-baccalaureate program at Columbia. But then that didn’t feel right either.

And then you went to FIT?
Yes, I ended up taking a few summer classes just to see if I liked it, and I loved it so much! It was harder than pre-med in some ways. I was so obsessive about it. I had to be the best at everything. I was used to staying up late every night from Columbia, so it was the same amount of sleep, but a completely different kind of work.

How did you come up with the name?
It took me about a year to come up with the name and branding for HONOR. I named it after my sister. It’s so strong, but when you say it, it sounds soft. It means something important. I love the idea of its having to live up to being good enough for my sister, whom I just adore. HONOR’s mission is to make as much as possible in New York City and the U.S. Almost all of our clothes are made here, and our fabrics are the finest in the world. It just suited the company.

Are the fabrics a big focus for you?
I feel like fabrics need to be like you want to eat them, you know? They have to be delicious. When you put something on, the fabric has to feel great and be really strong at the same time. I always had an appreciation for the old-world ways of sewing clothes and details.

What was hardest part of launching your own line?
When you first start you want to do everything you’ve ever done, and you have so many ideas. The first collection’s pretty easy, but it’s maybe not edited very well. The second collection you feel like you don’t have any more ideas, and then, for me, I realized I still had too many ideas. The hardest thing for me has been restraint and focusing on one idea. But it gets easier every season because it just gets faster and faster and I don’t have time to think about it.

Who were some of your early supporters?
We’ve had support from some really interesting people, like Tracee Ellis Ross and Oprah, and a lot of different socials. Some have been complete surprises. Tracee Ellis Ross walked into the store one day and just fell in love with the collection. Zosia Mamet has really become a friend of ours. She’s wonderful and I love dressing her. And we have the support of Fashion Group International and Swarovski, which has been huge.

How did you end up dressing Oprah?
That was the biggest surprise. I think [O Creative Director] Adam Glassman contacted us about pulling something for her. We got her measurements and it was all top secret. It was like, ‘Don’t share these with anybody!’ Obviously, we wouldn’t, but we were like, ‘Okay, just please wear it!’ It was for the cover, and she didn’t end up wearing it, but then one day she wore it to the school that she opened in Africa. They had the first graduating class and they did a documentary on it. She wore it on the day of the graduation and I was so excited! I felt like, ‘This is better than anything else! This is real. This is her real life.’ It was only my second season. It was really special.