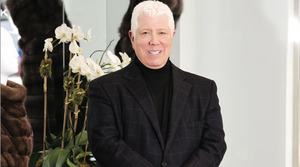 (NEW YORK) Fashion furrier Dennis Basso has been in the game for over 30 years and shows no signs of slowing down. We spent some time with him at his new townhouse on Madison Avenue to get the scoop on his expanding footprint and growing coterie of celeb superfans.
BY PAIGE REDDINGER

At a time when a lot of independent designers are shrinking, you opened a luxurious new flagship in November. Please explain.
For starters, our lease was up, but the brand was also growing quickly and there was an opportunity to move a little further north on Madison into this amazing four-story townhouse. We couldn’t pass it up. We’re now one of the five largest privately owned stores on Madison. We’re over 10,000 square feet!

Who did the interiors?
John Lindell, who has done all of the Dennis Basso stores. I wanted this to be like an art gallery. I wanted it to have clean lines, and be very simple and modern. Most of the walls are either white or black glass and there’s the slate gray floor. It became a wonderful backdrop.

How fast were you able to get the store open?
We did it all in four months. They worked day and night because we wanted to be open for the winter season. It was quite an undertaking, but it allowed us to be able to house all of our Ready-to-Wear, our evening gown collection, all the furs, day bags, evening bags, home furnishings, blankets, pillows—everything. It’s wonderful.

Who came out for the opening?
Over 500 people came. We had Brooke Shields, Debra Messing, Olivia Palermo, Katie Couric, Nina Griscom, Jennifer Creel, Jamie Tisch, Lizzy Tisch, everybody. We were able to close part of Madison Avenue. There were bongo players outside as people arrived, and we had DJ Kiss inside.

Is this the first time you’re offering furniture?
We’ve done furniture for interior designers before and have a few pieces here and there, but we’re still only in the beginning stages. There’s much more to come.

How often do you visit?
I just love the location. The fourth floor has offices, and I’ve created an office for myself facing Madison, which will be a wonderful place to have people in for lunch or a meeting. I’m working with my personal interior designer on that part, Ken Albert. We’re doing it with all mid-century furniture in taupes, grays, and beiges.

How else is the business growing?
This is now my 31st year. It’s interesting that a lot of people are slowing down after 31 years, but I feel like there are so many different opportunities and things going on. We’ve been dressing so many different celebrities, and that’s always fun. We went from originally only doing furs to doing Ready-to-Wear, and now we do Pre-Fall and Resort. We are also in the process of developing a mid-price bridge collection that would include Ready-to-Wear furs and eveningwear, which would make the collection available to so many more people, which is exciting.

What was your inspiration for the Fall 2014 collection?
I used the inspiration of some of the great contemporary artists. A lot of our fabrics today have been hand painted by fabulous brushstrokes. I was inspired by artists who are very fluid in their thinking, like Jackson Pollock and Robert Motherwell. I was looking at those types of artists, and I think that’s what’s made this particular collection more exciting and different.

What’s your most popular fur?
Mink is still a very popular fur, but not like Grandma’s mink coat. The ones we do are modern and young. Sable and chinchilla are also very popular with our customer. We’re also using a lot of crocodile mixed in.

Where are they made?
It’s all made in New York City. I think it’s very important for the economy of the city, the economy of the state, and the future of our country that we make these things here. There are so many fantastically talented artisans.

What’s the most expensive fur in your store right now?
We have a Russian lynx coat that’s $250,000. A sable is probably the next step down from that.

What’s foot traffic been like since you opened?
People love to come in and see a beautiful store. We have clients from South America, the Middle East, and Europe, and the Internet is their shopping avenue. Everything is everywhere, and because of that I think it’s important to be creative and innovative. The woman who is shopping at this level is seeing everything, everywhere.

Let’s talk about the celebrities. Who wears Dennis Basso?
We’ve always had celebrity clients and love getting new ones. I did some things for Elizabeth Taylor. We’ve also done things for Joan Collins, and Joan Rivers, and all those great women. We did the whole fabulous diva thing with Diana Ross, Patti Labelle, and Natalie Cole. Now, we’re working with a lot of the movie people. One of my great moments was when we designed the coat Meryl Streep wore in the opening scene of The Devil Wears Prada. We’ve done things for Nicole Kidman and Charlize Theron and, most recently, Catherine Zeta-Jones. We dressed Helen Mirren when she won an award recently, and just dressed that gorgeous child Emmy Rossum in something right from the runway for Spring. We dress Olivia Palermo quite often, Coco Rocha, and Naomi Campbell. It goes on and on and on.

How are those relationships forged?
Years ago, you really dealt with the celebrity themselves. Their assistant called, and the celebrity came in. Today, there’s a whole new line of fire with all the stylists.

What are the rules?
Everyone has a stylist. It’s unbelievable! The celebrity isn’t really picking. She’s picking from a selection that’s already narrowed down for her. They’re busy, so it’s understandable. It’s a whole different world. Everyone goes on Style.com to see the collection. They get a feeling, and then they call things in. It’s a process. It’s always at the last minute, though. Let’s hurry up and wait! Then they get it, then they’re not sure, so we hold it, and then maybe in the end you have a lucky winner.

How long can a celebrity hold something before they have to return it?
It has to do with how important the event is and how famous the celebrity. If it’s Nicole Kidman or Barbra Streisand, any designer is willing to wait it out, customize it, change it, do what it takes to make it happen.

Are there other celebrities you’d love to see in your designs?
I think it would be fun to design something for Lady Gaga, Taylor Swift, and Angelina Jolie. I’d also like to do something for Sophia Loren. I saw her a few years ago in the first class lounge in Europe at Lufthansa. She was exactly the way you think a star should be. She was sitting there with a big felt hat on in a gorgeous camel pantsuit. She had a croc Kelly bag with a sable coat on the shoulders, and a Louis Vuitton agenda she was writing in. She styled that all herself! I have very wide tastes. I like blondes, I like brunettes, I like redheads. I like a rare steak and I like Dover sole. Now I’m busy with the whole kale salad thing. But whatever it is, I like it to be the best of what it is. For instance, if it’s going to be a fair-complexioned girl, she’d better be the fairest.

Other than fur, is there a specific category that’s growing for you?
Yes, my Ready-to-Wear category. Years ago we would dress a celebrity, but it was for her coat or her wrap. Now, all this celebrity dressing is about clothes. That’s how we became part of Pre-Fall, Resort, and Pre-Spring.

Do sales spike when you dress a celeb?
Between Los Angeles and New York City it’s a whole big America out there. Let’s say a sophisticated woman from St. Louis is watching the Academy Awards and sees a Dennis Basso gown on the red carpet and she comes to New York, because she’s buying a dress because she’s the chairwoman of a chartiy ball or her daughter is getting married. She’s going to now add Dennis Basso to her list. That’s not fantasy. That’s a fact!

You’ve been on TV a bunch yourself. Do you ever feel like a celebrity?
Do I feel like a movie star? No. Anyone in a certain category that excels and makes themselves visible becomes a celebrity in their own category. There are celebrity plastic surgeons and there are celebrity doctors. Who ever thought there would be celebrity chefs years ago? Before the world of supermodels, a model was a model. We’re dealing with a whole new mechanism with everything. The trick is to stay on board, baby. I’m on board for the long haul. I’m not doing any small stops. We are full steam ahead in that choo-choo!

Now And Then! With Hal Rubenstein