From The Daily's Hollywood Issue: Rodarte's Girls On Film 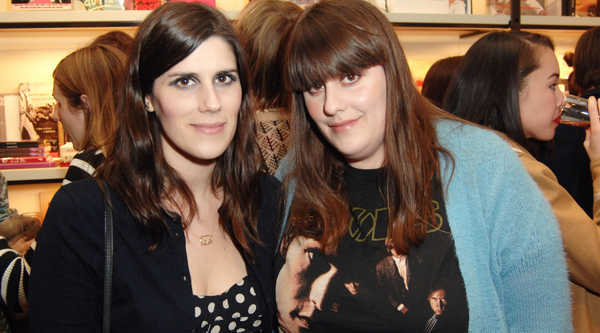 (LOS ANGELES) The cinema-obsessed sisters behind Rodarte were into L.A. before it was cool. Here, Laura Mulleavy talks Oscar gowns, the perils of custom orders, her label’s love of storytelling, and the genres that make her swoon.
BY MICHELLE LEE

Everyone’s talking about L.A.’s big fashion moment. Is it for real?
When we started out, people frowned upon us being from L.A. Now, they’re excited by it, so I do think people have definitely shifted viewpoints.

What’s so great about L.A. fashion?
That there isn’t a big distinction between the genius design of a pair of Levi’s and a beautiful couture jacket. It’s all about the concept.

Why now? Is there something in the water?
I think it’s not just a trend. It’s based on different things all happening at once, setting up a mindset of what’s going on in an area.

How so?
Well, I always think about how in the ’60s, the practical arts were really affected by the aeronautical engineering boom and different developments in plastics. Right now, a lot of people who work in different cultural, arts-based jobs are moving here, because it’s affordable and you have access to things that are really interesting. There’s also a lot of energy filtering down from Silicon Valley.

Of course, the weather’s also pretty awesome.
Oh yeah, it’s nice. I feel like that’s part of the thing that can affect your psychology immediately. It’s definitely relaxing. I’ve always been the type of person who’s really been affected by my environment. That’s the biggest reward being here. Kate and I have consistently done collections based on our experiences. In our own way, we don’t design clothes for us to wear, but rather about where we grew up, or what we see day to day.

We read an old interview where you and Kate discuss dealing directly with the celebs you dress. Do you still?
Oh my gosh, when was that from? Wow, it depends. Yes, you have moments where a friend comes over and says they need to borrow a dress. Then there are other times when there’s a whole system that helps somebody get ready for these larger events and press tours. But a dress is like a personality. If you’re not doing custom then it’s about them having the right dress for the right mood. That’s a lot of variables to match up. You never know what someone’s going to feel like wearing.

Do you ever do custom pieces?
We don’t. I don’t know how it works for everybody else, but we’re a smaller independent company so it’s a lot different for us than it might be for a large brand that has ambassadors attached to campaigns. I remember when we made a gown for Reese Witherspoon for the Oscars. They said, ‘We really want to have something really exciting for her, something really young.’ We came together with this idea and that was cool because it was a long-term process. Other times, it’s hard because some people just want to be able to try on dresses. A sketch is very difficult to understand if you don’t know the language.

And there’s still a risk they won’t wear it.
Oh, for sure, and you know that going into it. You have to be willing to just make that choice as a company.

How important are celebs to your brand?
They’re important in that it’s another way of expressing who you are as a designer. It’s really interesting to see something you’ve done worn in a different way than you originally imagined.

Is the effect measurable?
Not so much that it affects your sales. It’s more about just building a larger vision of what your brand means to people. And visibility. To me, fashion is a really artistic world, but for other people, not as much. So being worn by celebrities helps people understand it outside of this world.

We know you’re influenced a lot by film. What are your all-time favorite genres?
Classic Hollywood, horror, French new wave and Italian surrealism; I like them all! Kate was an art history major and I was an English major, but I studied a lot of art history, too. I feel like both those mediums trained our eyes and our minds to analyze things in a visual way. We approach fashion and our collections as storytellers. We’d rather tell a story than anything else.

How do you spend your Oscar day?
The year Natalie [Portman] won, we were able to all be there when she was getting ready. We made her gown. We really celebrated after that one because it was such an incredible moment and she worked so hard. But other years, we usually gather our friends and watch it like everyone else. It’s like the Super Bowl.

Do you watch the red carpet?
Oh my gosh, I love the red carpet—it’s so fun! I know some people don’t like watching it but I think it’s fun to see the clothing. A design house works so hard to make a lot of those pieces and a lot of what people are wearing is custom or couture. They’re special dresses, no matter if you personally don’t like something. You know it’s been a lot of work for the entire team that made that happen. I feel like it’s the most fun part.

Random question: give us a fun fact about you.
I was my high school valedictorian. Does that count? I had to give a speech and everything. Kate helped me write it. I was really nervous. I think the speech was terrible probably!