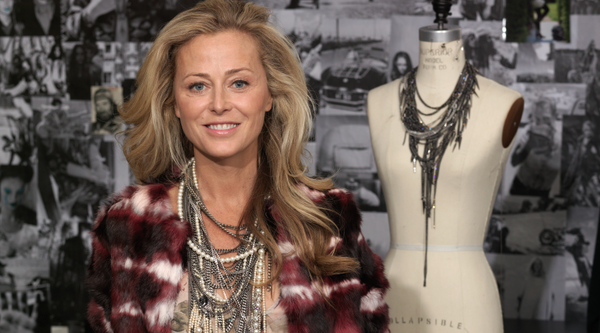 (LOS ANGELES) Haute Hippie founder Trish Wescoat Pound adores Malibu, but she doesn’t have the deepest West Coast roots, nor is her celeb-adored line based in L.A. But you’d never know it, looking at her vintage Hollywood and boho chic pieces. The approachably luxe label opened its first West Coast outpost in December on Sunset Plaza—expect to see more of Wescoat Pound at your local Coffee Bean!
BY ALEXANDRA ILYASHOV

When did your love affair with the West Coast begin?
Many years ago, when Haute Hippie was still just in my mind, I spent a lot of time in Malibu with my daughter. There’s this certain bohemian, laidback lifestyle. It’s not just women wearing workout clothes all day—there’s still a hint of style. Old Hollywood glamour and a bohemian sensibility probably only exist together in one place: L.A.!

It does feel decidedly Angeleno-bred.
I’m constantly asked if we’re from L.A. People will literally be standing in our design studio in New York and say, “Oh, you’re based in L.A, right?” It’s funny. But if you look at the collection in its entirety, you wouldn’t think that. Nobody in L.A. is doing what we’re doing, to my knowledge.

What were your early Malibu-infused looks like?
In our first collection, we literally put boy shorts with big shirts and UGGs with ball gowns. Confidence comes with being comfortable. My idea of comfortable is a great gown made from a T-shirt…so we make T-shirt gowns.

Why open first L.A. location on Sunset Plaza?
I can’t take credit for it! Jesse Cole, our CEO who happens to be my husband, chose it. It’s under the Hollywood Hills, and kind of off the beaten path.

Tells us about your red carpet-ready frocks.
We do outrageous gowns. We do hand beading, not machine beading, and we draw all of our own prints. No one is doing what we’re doing, in L.A. or New York. I don’t really get to go anywhere in our gowns except maybe to the door to greet the Chinese deliveryman, though.

What kinds of celeb fangirls flock to Haute Hippie?
Adriana Lima and Petra Nemcova: let’s be honest, though, both of them would be beautiful wearing a sheet! Miranda Lambert wore one of our dresses to the 2013 Grammys—I’m in love with her! We’ve always had a country following. And Beyoncé has worn a leather blazer and dress of ours.

Who would you love to dress next?
I’m completely obsessed with Jessica Lange. I love American Horror Story. She’s just sexy at any age!

Is it hard to compete on the red carpet front with major, ultra-luxe designers?
With all due respect, most of the people that walk down the red carpet wear designers like Giorgio Armani, Calvin Klein, and Zac Posen. They all make beautiful dresses, but I want to see something different!

What are your favorite L.A. haunts?
I love the Santa Monica flea market. I’m a huge vintage girl! The Ivy makes an excellent Bloody Mary. I also adore Resurrection, Decades, and The Way We Wore.

Do you crave anything about the City of Angels when you’re in NYC?
I recently became a vegetarian but in Malibu, there’s this burger place on the Pacific Coast Highway that serves burgers on baguettes. It’s the best thing I’ve ever had in my entire life, but there’s no need for me to go there anymore…

Would you ever move to L.A.?
I would move when my daughter is done with school! She’s 13 now. Eventually I see my life in L.A. The weather, the pace, the lifestyle, the sun—it’s just healthier in general. Also, I think I have a better relationship with the Pacific Ocean than I do the Atlantic. I don’t know why, especially since I don’t even get into the water.