From The Daily's Hollywood Issue: Hairstylist To The Stars, Adir Abergel 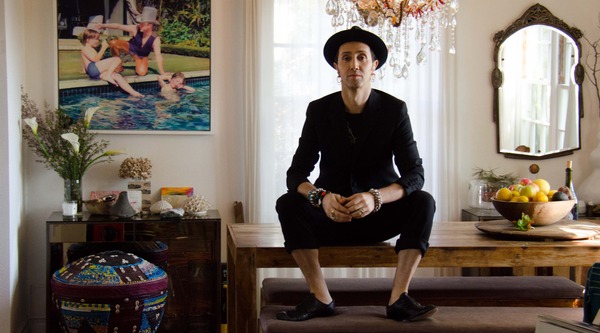 (LOS ANGELES) If we’re learned anything about fame over the years, it’s this: Never underestimate the transformative power of a brilliant new ‘do. Hairstylist Adir Abergel makes sure the locks of A-listers like Kristen Stewart and Jessica Biel always look chic—and inspiring. Let’s get to know him, shall we?
BY JULIANNE ZIGOS

What’s a typical day like for you?
My job is very physical. I don’t think people realize that. You’re waking up so early and holding a blow-dryer with 1,700 other things going on! With makeup, you can do it and it will stay for a certain amount of time. Hair moves. My entire theory behind hair is not overusing products and to use the natural movement, so when I’m on a shoot I’m basically sitting with the photographer using a wind machine and touching up between every shot.

Sounds intense. How do you tailor a cut to a star, like the pixie cut you gave Anne Hathaway?
Well, Anne is such a real artist, so rather than putting a wig on for that role she chopped her 16-inch long hair. I was just fixing it into a shape that was not a boy-ish buzz cut. When we cut bangs on Jessica Biel, I looked at inspiring images—like ’60s Jane Birkin—and I thought it would give a lot more edge. Hair is such an incredible way to change perceptions. But if I think someone’s not ready for a change, I’ll say “let’s wait.”

How do you get someone ready for the red carpet?
I don’t even think about the hair until I have seen the dress. It’s about having a cohesive conversation between the dress, the hair and the makeup.

Do you consult with clients before the big night?
Never. We don’t meet until the day of. This is what a lot of people don’t understand about my job. My art needs to be created on the spot. When they show up, I show them a few images. Sometimes, they’ll say, “No, I want my hair down.” You have to be flexible.

How long do you usually have?
I’ve done events where my kit didn’t show up and had 30 minutes for hair, makeup, and styling.

Any major hair bloopers?
With Jessica Biel for The A-Team premiere, my kit didn’t show up and we needed to be out in no time. I borrowed a comb from the manicurist and used pins to create a curl because I didn’t have a curler. It all came together, though.

How many clients can you do in one day for a red carpet?
I have done three people in one day, but that is really hard. All of the girls would come in and stay in the same hotel. The last time I did that was when I did Gwyneth Paltrow, Amber Heard and Jennifer Garner for the Golden Globes.

What’s the craziest thing you’ve ever used in a pinch?
I didn’t have any shiny syrup in my kit and I needed it, and a makeup artist had this skincare product called Quench by Kate Somerville. It became a staple in my kit.

Ever been star-struck?
Yes, when I saw Bill Clinton. I didn’t know what to do I was so excited. I was doing Chelsea’s hair. My husband is a Harvard scientist, so I tend to love beautiful minds.

Did you speak to Bill?
I was like, “Hello Mr. President Clinton.” I wasn’t sure if I should say Mr. or President. I just had no idea!

Is it true you get your hair cut at Fantastic Sams for $10?
I used to. I didn’t care about the way that my hair looked because who gives a s**t? It’s just a haircut! Now, I go to a friend who’s more fancy. Unfortunately, he also charges more than $10.

From The Daily's Hollywood Issue: Head Over Heels For Stuart Weitzman