From The Daily Summer: What's Up, Doc? A Cosmetic Dermo Tells All 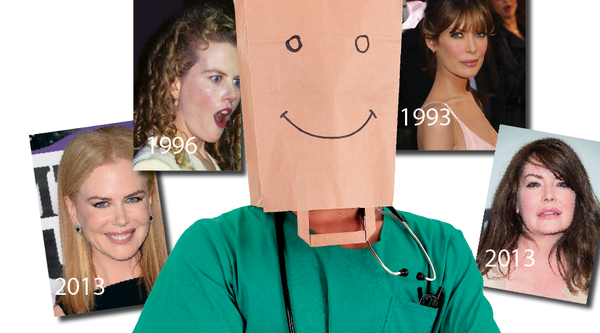 (NEW YORK) We know YOU would never do anything to alter what nature gave you, but your neighbor across the lane? Puh-leaze! We asked one of the city’s top cosmetic dermatologists to tell us how Hamptons ladies keep their faces in place. He had us in stitches.
INTERVIEW BY EDDIE ROCHE

You’ve been busy lately!
I have indeed. You see, the thing with Hamptons people and with Manhattan people in general is that they want to have their cake and eat it, too. They want to lie in the sun, drink their rosé, smoke cigarettes, work 80 hours a week, sleep two hours a night, and then take a pill that makes it all okay. When you have these Type-A personalities, they want it all. Getting treatments is part of the package that allows them to burn the candle at both ends. At the end of the summer they’ll say, “Hey Doc, I’m tan and I’m going to laser it all off.” Of course, the majority of my patients just want to look as good as they feel and to live well, but there is the stereotype of the overworked, under-rested, and self-abusing New Yorker. That’s definitely something I see a lot of.

Do you feel sorry for people who just can’t afford your services?
No. Because fortunately cosmetic surgery is accessible to everyone now. I’m not the most expensive guy on the block, but I’m certainly not the cheapest. There are strip malls that have Botox shops and are injecting this stuff into anyone nowadays. It’s accessible and it’s great for a lot of people that can’t afford it. It’s no longer just Gucci anymore. It’s H&M. It’s not just the ladies that lunch. If you’re lucky enough to have your health and your family, then this is the icing on the cake.

Are those mall Botox places safe?
It depends. Some are, and some are totally not. I would like to think that people are coming to me because there is an automatic expectation of safety, experience, accreditation, and reputation. Of course, as you go down the economic scale that confidence is going to decrease, but isn’t that true of all services in the world? That being said, the most expensive things aren’t always necessarily the best, but in medicine, you get what you pay for.

What have your patients been asking for lately?
Right now it’s all about fat-reduction procedures, because everyone wants to look good in their bikinis. Everyone is obsessive about little patches of fat. The two biggest ones are the noninvasive procedures where you don’t have to get liposuction. Liposonix is one of them, and CoolSculpting is the other.

What do they do?
They basically do the same thing. They freeze the fat on a suction device to your body, and then your body metabolizes it.

Where do most people have it done?
Lower belly and love handles.

Are the women coming in for it in good shape?
They’re in excellent shape. They are crazy for having it, but they don’t like the way they look naked. Super-thin and fit women, particularly those who have had a few kids, have asymmetric bodies. They’re super skinny on top but have a little fat on their outer thighs.

Can the fat come back once it’s been metabolized?
As long as you stay weight-stable, it doesn’t come back.

What’s the next big thing?
The next thing in technology is going to be hair rejuvenation. In the next five years, we’re going to have really good technology that helps male and female hair growth.

Really? A cure for baldness?
I don’t know about a cure. If you’re acutely bald, you’re kind of screwed. Unfortunately, a lot of women deal with hair loss as well. It’s going to hurt the wig and hair extension companies.

Does most of your clientele summer in the Hamptons?
I have a lot of people from all over the place—Connecticut, Saudi Arabia—but the majority of my patients from Manhattan do spend time here. I see patients out here as well.

Do they flee to the Hamptons to recover?
It’s not that much of an issue in my practice because I’m a minimally-invasive plastic surgeon. Nothing that I do to my patients has more than a couple of days of functional recovery. They’re not getting breast implants or anything.

Any crazy requests?
People sometimes ask me to remove fat, and they don’t have fat. There are odd uses of Botox. Botox is commonly used to decrease sweating, and people have some odd places that they would like to do that.

Like where?
Genital area. The name for it is hyperhidrosis. There are women who request it there because they feel they have sweaty genital areas. I have performed it, but it’s not something that I regularly perform. Most commonly, it’s under the arms or on the hands and feet. Some people literally rain from their hands, and it creates social problems, especially in their minds.

How much are people shelling out for this?
I have patients that spend $15,000 to $20,000-a-year just to maintain the way they look. As a cosmetic dermatologist, most procedures involve maintenance. It’s not like you get your breasts done, and you’re done forever.

How much does insurance cover?
Zero. A reason that even general dermatologists don’t take insurance is that in the city insurances don’t pay anything, and the cost of business is more than they can afford.

How much are fillers?
Fillers could start at about $750, and you can spend up to five grand. The most common request is around the mouth.

When is the busiest time for patients to come and get touched up?
Spring and pre-holiday. October through December, and then March through June.

Are Botox parties still a thing?
I discourage them. It should only be done, and I would only do it, in a medical practice. Because these procedures are noninvasive, friends could come in and do them together. If five girls want to come to me and get Botox together and have lunch together that is fine, but it needs to be done in a medical place. It’s not something to do while drinking champagne at someone’s mansion.

Why wouldn’t they want to do it alone?
They get moral support from doing these things together.

Alrighty. What’s an awkward day at the office for you?
I’ve had ex-wives run into the current girlfriends of their husbands in the waiting room. I have to separate them and put them in different rooms. Odd run-ins in the waiting room can be the highlight of the day. I’m a boutique practice, so there are never more than three or four people in the waiting room; but this can be bad if the only other person waiting with you is your ex-husband’s girlfriend.

Are a lot of men coming in looking for a tune-up?
Half of my fat removal patients are men. They are in-shape men who are annoyed by their love handles, chins, or things like that. They’ll also get injectables and Botox.

What’s their reasoning?
They use different excuses. They say they need to do it for work or to have a competitive edge or because they feel that their younger peers are moving forward faster than they are.

Do they actually verbalize that to you?
Absolutely. Everybody has to verbalize why they are in my office, and for men, it is usually work-related.

Would other doctors do that?
Sure. Don’t clean up your room if it’s already clean. I will tell you though that I do have teenagers who use hyperhidrosis. It’s a common thing among young adults and it is actually a medical problem.

What’s the age of your youngest patients?
I generally start seeing patients in their mid-20s for cosmetic issues. Maybe not Botox, but freckles, sun damage, or laser hair removal. Starting at age 21, we all go downhill and some faster than others. Sometimes it’s genetic, sometimes it’s nature, and usually a little bit of both. It’s at age 21 that people realize they are not going to be 17 forever, and that’s when it starts.

Can you explain what’s up with Nicole Kidman’s face?
She hasn’t had surgery. It is a mixture of the wrong Botox and fillers. It’s not what she has done, but how it has been done. Jennifer Lopez and Angelina Jolie are examples of people who may have had the right balance of things. When you shoot to be perfect and have no wrinkles or lines—that’s when people look unnatural. You have to look relatively natural for your age. It’s not appropriate for a 40-year-old woman to have the amount of lines that a 25-year-old does. It’s all about proportions. It’s like fashion; if anything is too obvious, it’s not appropriate.

Is it the dermatologist’s fault?
It’s always the patient’s fault to some degree—especially in Southern California. There is always going to be another doctor to go to who is going to take your money. It’s like the Michael Jackson syndrome, going from one surgeon to another until you get what you want.

Is Madonna doing the same thing as Nicole Kidman?
Depending on the day. I think Madonna looks pretty good for someone in her mid-50s. They take a lot of bad photos, but bad photos can happen to anybody.

What would someone want?
Usually injectables, and it’s just not comfortable for them to come to my office.

Do a lot of your patients go to plastic surgeons as well?
Not really, unless I send them to them to get a face lift or something. Most of my patients are in their 30s to 50s.

Do you do Botox on yourself?
Yes. I wouldn’t do anything on my patients that I wouldn’t do on myself or a family member. That is my rule.

Clearly you enjoy your job!
I love my job! I wouldn’t do anything else!