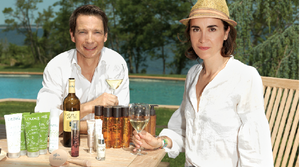 (NEW YORK) In 1993, Caudalie Skincare founders Mathilde and Bertrand Thomas had a chance encounter with a pharmaceutical professor who schooled them on the benefits of berries. Two decades and a move to New York later, these Parisian expats have a global skincare business, an expanding brood, and weekend roots in East Hampton, where they’ve recreated a slice of the French countryside. Here, Mathilde schools us on the virtues of vino, her passion for fromage, and so much more. Read on for the
full pour…
BY ALEXANDRA ILYASHOV

How did Caudalie come about?
The story begins on my family vineyard, Chateau Smith Haut Lafitte in southwest France’s Bordeaux wine region. In 1993, we met Dr. Vercauteren at the University of Pharmacy of Bordeaux who told my husband and I that grape seed is the most powerful antioxidant created by nature because it contains polyphenol. It’s tens of thousands of times stronger than vitamin E against free radicals—which rust cars and create four out of five wrinkles. If you can stop free radicals, you can literally stop aging! We created the first grape seed polyphenol skincare line with Dr. Vercauteren, and we’ve been working with him since.

What were you doing before you met Dr. Vercauteren?
We were still students; my husband was my college boyfriend at the time. We were going to work for a skincare line—I was going to be a “nose” because I wanted to be a perfumer. I was 23, and I was very naïve!

How so?
We thought we could conquer the whole world with this molecule. We had no idea that there were already 800 brands in the country, and retailers didn’t know what polyphenols were at the time.

How did you gain traction?
It was tough. We had a fantastic product, and we were motivated. We thought we were going to have incredible success, so we had a lot of energy. We knocked on every single retailer door—mainly pharmacies in France—because they’re very beautiful, they’re independent boutiques, and they have the best products. It was fantastic to be sold in the French pharmacies because there’s a pharmacist behind the counter, and they loved the story behind our products, created by a doctor with a pharmacy Masters. I thought we’d be a success if we had 2,000 retailers by the year 2000, and we did!

How educated were average consumers?
Studies were being published about the French paradox of people living longer and having less cardiovascular disease, even though they eat a lot of cheese—because they drink a lot of red wine. An episode of 60 Minutes aired in 2000 about that French paradox and how red wine antioxidants were good for you, which journalists reported on, which helped.

Do you still work with Dr. Vercauteren?
Yes! When he comes to visit, he stays at our home. Our kids call him Professor V. He has the same beard he always had. He hasn’t changed over the years—all those polyphenols seem to work!

Besides Dr. V, who does the science-y grunt work for the company?
Our lab is located in the “cosmetic valley” between Paris and Bordeaux in the south of France. There are 500 people [in the company], and 95 percent are women. They’re like chefs: Once we have the molecule, we need to feel the texture. It takes hundreds of trials. It can take a year to get a product right. I am a control freak with texture. I get about 10 lab samples sent to me by UPS each week!

Do you use your nose-y knack for fragrance much anymore?
Very much so! I make sure every single skincare has a scent that makes sense. Usually it’s grape vine flower, our signature scent. I wanted to capture the French Riviera’s scent. I add energizing notes to morning moisturizers, and calming notes to night creams.

What’s it like working with your husband?
We cannot say it is easy. The recipe for success is that we each have a field of competence. He lets me do the product; he’s behind the strategy and business side of things. We worked together in the same office here for three years; it was a nightmare at times. We have our own offices now! We still can see one another, and we usually leave the door open to hear each other. But we have a  bit of space.

How did you choose the ‘hoods for your NYC outposts?
I’m obsessed with the West Village, and with Bleecker St. in particular. I would love to live there. It is very European! And we chose the Upper East Side, on Lexington Ave. and 74th St., because it’s very busy and has a different clientele than downtown.

How did you score The Plaza for a Caudalie spa location five years ago?
The Plaza contacted us: their architecture is French so they wanted a French brand. We were looking for a big space, and The Plaza’s spa space is 8,000 square feet.

Do the treatments involve wine?
No. You drink wine before or after treatments at the spa—or during! The treatments use grape seed, and there’s a facial with fresh grapes. There’s also a bath that uses a red [grape] extract that removes dead cells on the skin’s surface.

What are your favorite maquillage brands?
I’m a big fan of NARS, especially their blush. I also use Lancôme mascara, Deborah Lippmann nail polish, Oribe for my hair, and MAC concealer.

Any interest in opening a store out East?
I would love to do a pop-up store! Right now, we’re carried at White’s Pharmacy in East Hampton.

What’s your Hamptons backstory?
We moved to NYC in September 2010; six months later, we rented our first house in the Hamptons. I adore New York, but with kids, you want to go to the countryside. It reminded me of France! We like having the bay and ocean: you can boat on one side and surf on the other. We found our little bit of France here. We love it.

Why Hampton Bays?
We wanted to be close to the city. We love East Hampton and Southampton—and Montauk—because we love to surf. But we were able to put a mooring with our boat in front of the house. There aren’t many places where you can do that! Also, my husband is a big wind surfer, and we live in the best spot for that in the Hamptons.

What does your clan do out East?
My kids are crazy about surfing in Southampton at Flying Point Surf School. They like to go daily. We’ll see women in Bentleys dropping their kids off. It’s super chic! My husband is the best surfer, followed by my son, and then daughter. And we ride our boat to visit friends in Southampton. We also hike in the woods and bike.

Does the Hamptons ever feel too scene-y?
Nothing compares to the Hamptons. The wealthiest people in the world go, and they’ve created their own paradise. There isn’t a single visible electricity wire. It’s very…unique!

Do you venture beyond Hampton Bays?
We go about once a year to Montauk, and we go to Sag Harbor all the time. We ride a Hinckley boat, which is very chic and has a fast motor, to Sunset Beach. And we love Sant Ambroeus—it’s our favorite restaurant in the Hamptons.

How French is your diet?
I eat way too much cheese. At least twice a week, we do parties in our boutiques with beautiful platters of cheese. There is a great place next to our office to get cheese—Ideal Cheese. For Caudalie events, we need cheeses that do not smell, like Comte and Parmigiano. It’s important in a skincare environment. I also just bought some Monk’s Head, and I use this Swiss tool to make little flowers with it.

Where do you grab your groceries in the Hamptons?
I buy fish at Cor-J—it’s the best—and Hampton Prime Meats for meat. My friend, interior designer Muriel Brandolini, has a house in Hampton Bays next to us; she tells us where to buy mozzarella. I also like this store called Wild by Nature. They have strange grains and sprouts I cannot find anywhere else.

From The Daily Summer: What's Up, Doc? A Cosmetic Dermo Tells All