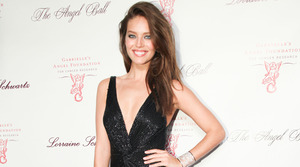 (NEW YORK) From the hockey team in rural upstate New York to stalking the runway for Givenchy: Welcome to Emily DiDonato’s last year of high school. The blue-eyed stunner then nabbed a lucrative Maybelline New York contract, brushing shoulders with the likes of Christy Turlington. Since then, DiDonato scored Vogue covers, graced high-gloss campaigns, and joined the bodacious ranks of the Sports Illustrated Swimsuit Issue crowd. Turns out, nice is chic!
BY ALEXANDRA ILYASHOV

What was your childhood like?
I grew up in upstate New York. My dad is a retired firefighter and my mom was a stay at home mom. We had a nice house, across the street from a farm. It was a very simple, organic lifestyle.

How were you first discovered?
People had always told me growing up that I should be a model. It just didn’t seem reachable, I guess. When I was 17, a family friend knew someone at the first agency I ended up signing with. I met with the agency, and I was working the next day.

So did you make it to your prom?
I did. I was traveling a lot for work, but I made sure I got back in time for prom. I didn’t have a date, and I ended up going with my best friend from home, Ali. I was the only one in a short dress!

What was your first shoot?
It was a beautiful story for Glamour. It’s still one of my favorite pictures I’ve ever done, actually. I was a junior in high school, I came into NYC by myself, and stayed overnight.

How’d your runway debut go?
I was 17 and I did a Givenchy exclusive, in 2009. It was really wonderful. I was actually shooting for Maybelline in New York when I got the phone call. I flew to Paris the next week. It was really exciting! It’s also one of my favorite brands, so it was cool.

How did you feel on the catwalk for the first time?
I was petrified. I still am petrified! That feeling definitely doesn’t go away for me—I guess it’s a sort of stage fright. The girls walking the show were super experienced; they’d been doing shows for years. I was afraid I was going to trip, because the runway was really complicated. My mom was in the audience, and she was super excited.

Any runway highlights since then?
When I walked Louis Vuitton! There were so many supermodels in that cast, and it was all about the body that season. So many girls were curvy and beautiful. Rosie Huntington-Whiteley, Bar Refaeli, Elle Macpherson: It was a really cool cast. Natasha Poly walked behind me, and she was an angel to me—I was so nervous.

How did you first start working with Maybelline New York?
Maybelline saw my very first shoot for Glamour, and they asked me to come to their offices. I was super young, and pretty clueless about what to expect. But I knew Maybelline, of course—I’d seen the commercials for years. I tested for them and went all the way to Australia with my mom to film a commercial. I didn’t know how to model and I didn’t know how to be on film.

You worked on a TV campaign with Christy Turlington so early in your career!
It all happened so fast. We shot that Maybelline Color Sensational commercial in Times Square, they threw Christy and me into this tiny little Airstream, and I was sitting across from her with no idea what to say. She could’ve easily just swatted me away, but she was so kind and welcoming to me. Christy is the most respectable, smart, wonderful person, and such a great model.

Do you like doing TV ads versus print work?
Shooting commercials is always a little more challenging, it’s just more of a production. But I like doing film better; there’s a lot more freedom. You can kind of play around. It’s a bit more chaotic than a print shoot, but it’s cool.

What are you favorite Maybelline products?
Baby Lips is always in my purse, especially for chapped lips in this weather. I always use Fit Me powder because it takes two seconds to put on. Dream Matte Mousse is great for a nice matte finish. Waterproof Volum’ Express The Falsies mascara is really good because whenever I go out my mascara ends up on my nose.

Have you picked up any genius makeup tips on the job?
Drinking a lot of water makes a huge difference for your skin and lips. That sounds kind of silly, but it’s the number one thing to do. Moisturizing is obviously super important. [Maybelline lead makeup artist] Charlotte Willer has a funny little thing she does—she curls our lashes individually with a metal spoon. It totally works!

What’s it like behind the scenes on your Maybelline shoots?
It’s pretty crazy and intense, but also really fun. There are so many people on set, and I genuinely like everyone; it’s a really big production. We take up a full studio and we’re there for a really long time!

How’d you feel when you heard you’d scored the February French Vogue cover?
I was in the mountains of New Zealand filming a commercial, [when I heard] and I was freaking out. The next week, I flew to Paris. David Sims shot and Emmanuelle Alt styled. I was expecting it to be madness, but it was very relaxed. Everyone was super at ease, and they knew what they wanted.

What did it feel like to see the cover?
I almost cried. I was trying to play it cool, because I wanted to totally dork out. When the issue, came out, I was in Bangkok with Maybelline. I woke up at 2 a.m. from jet-lag and had 10 emails from people congratulating me.

How was your Vogue Spain cover whirl last year?
It was my second Vogue Spain shoot, and it was with Miguel Reveriego, who’s really wonderful. We were in Rome doing a story for Giorgio Armani, we finished at 3 p.m. and we ended up shooting three more hours of beauty and nakedness and fun, just playing around. It recently came out in Vogue Spain, and I’d totally forgot we even did that. It’s just really beautiful.

Is American Vogue on your bucket list?
Of course. Why not! Dream big! A lot of the things that have happened to me, I definitely didn’t see coming. I would die to be on the cover of American Vogue. That would be awesome.

Was booking the 2013 Sports Illustrated Swimsuit Issue a major moment?
Out of everything I’ve done, I’ve probably known about Sports Illustrated the longest, since I was a kid. I wasn’t sure I was going to go in that direction modeling-wise, but it was also a dream of mine. It’s about being a celebrity, more than just a face. It brings a different aura to your name. Shooting for Sports Illustrated, you’re not necessarily selling anything, unlike a commercial or catalog. You’re in a swimsuit in some crazy awesome location; I was in Namibia. They basically want you to be yourself, roll around in the sand, and have a good time.

Who are your industry pals?
I have quite a few really solid, actually wonderful friends in the industry. Michael Angel styles for Maybelline, and he’s one of my really close friends. I’m also friends with Ali Michael, Julia Stegner, and Kate Bock.

What does your family think of your job?
They’re really supportive, happy, and super excited. Anytime something new comes out, my parents are like, ‘Oh my God, it’s so beautiful!’ My brother and sister are pretty relaxed; we don’t talk about it at all. Same with my friends from home. I’m still really close with them, but we just don’t even touch on the subject. No one cares!

Your heritage is a mélange of Italian, Irish, and Native American. What are you most connected to?
The majority of my family is Italian; we have pasta on Sundays. My grandmother is part Apache.

Pre-modeling, what was your dream job?
At one point I wanted to be a marine biologist, God only knows why. I was planning on studying psychology, nutrition, and fitness.

What are your hobbies nowadays?
I like being outdoors. I love to hike, stand-up paddle board, and swim. I love the water; I’m a Pisces. I have a dog upstate, and we’ll just run around outside for hours.

What would you be doing right now if you weren’t modeling?
My friends are now graduating from school, so I guess I would be graduating, too. I hope I would’ve left school by now, though I’m really not sure! Maybe I’d be out on the grind, trying to get a 9-to-5 job, just like anybody else.