Divergent Fever Kicks Off At The Cinema Society 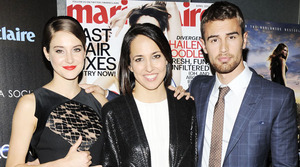 (NEW YORK) Before Divergent kicked some serious box office tail over the weekend, raking in $56 million, The Cinema Society and Marie Claire held a screening at the Hearst Tower on Thursday for a crowd of NYC VIP’s. The evening, starting at a later than normal 8 p.m., brought out the film’s stars Shailene Woodley (the next big thing and the current Marie Claire cover gal), Theo James, Ansel Elgort, and Amy Newbold, as well as director Neil Burger, and the author of the best selling book the film is based on, Veronica Roth. In case you missed it over the weekend, Divergent is an action packed adventure set in a world where people are divided into distinct factions based on human virtues. Woodley’s character finds out early on that she’s Divergent and will never fit into any one group. You know the type. Problem is, Kate Winslet’s character wants to get rid of all Divergents so she and her new buddy…We won’t ruin it for you.

The CFDA Will Honor RiRi With A Fashion Icon Award