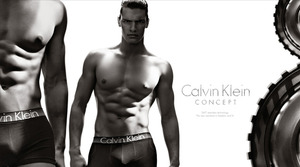 Perhaps it was that hot Calvin Klein Concept commercial that blew a fuse in New Orleans last night. Ryan Seacrest, Sophia Bush, and Maria Shriver were just a few of the names who took to Twitter to comment on the hot spot starring Matthew Terry. (Remember that name!) Terry is a personal trainer from Pennsylvania who was discovered in 2011 after being named the co-winner of the annual VMAN/Ford Models Search. We like him very much. Enjoy the sexy one more time!

Everything You Need To Know About Sophia...

Catching Up with Actress Sophia Bush on...

Catching Up with Actress Sophia Bush