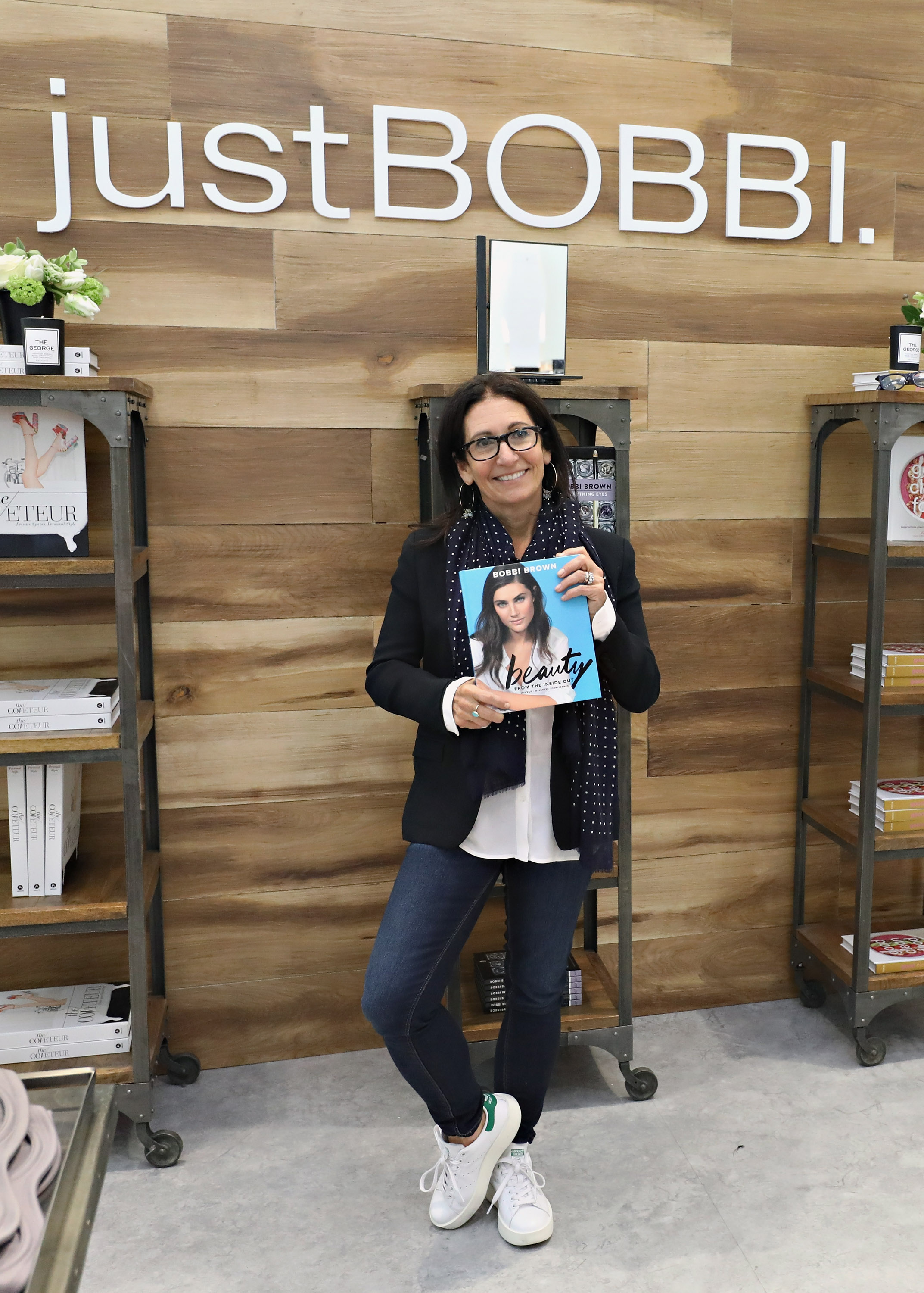 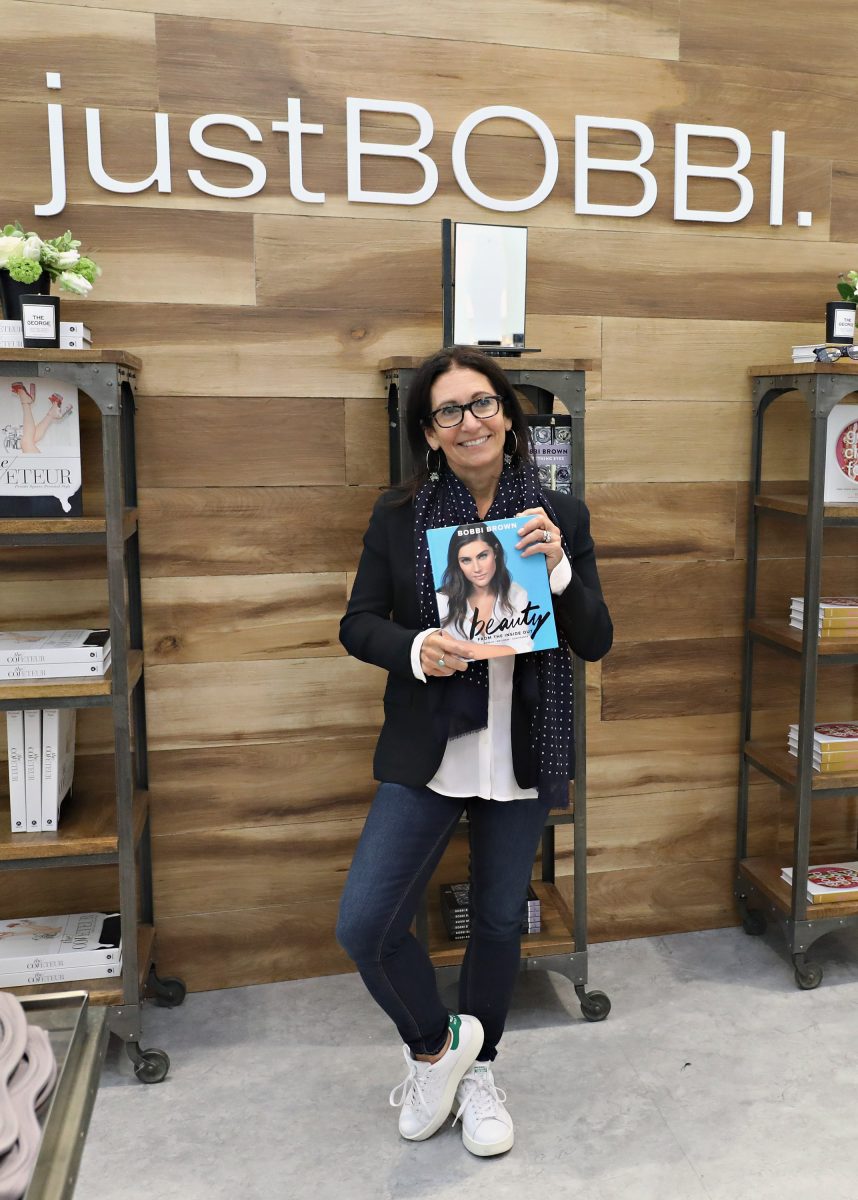 Makeup maven Bobbi Brown left her namesake beauty empire last year, and already, she’s on to new things. Yesterday she unveiled justBOBBI, a shop on the ground floor of Lord & Taylor in NYC that’s a medley of her beauty, apparel, wellness, and lifestyle faves. On tap this month: Stan Smiths, a candle made for an inn she’s renovating (more on that below), her new book Beauty from the Inside and Out, and more. Atop the L&T rooftop terrace, we discuss!

How long was justBobbi in the works?
I thought it was a couple of months, but they reminded me that it was six weeks [to build the shop]! But we’ve been talking about it for a long time.

How did you land on Lord & Taylor as a partner?
Lord & Taylor landed on me! What I love about Lord & Taylor is that they are open for anything. There’s not a whole lot of rules. I had to pick some of the things from Lord & Taylor, but I ended up bringing in 70 percent new items into the store, which is really neat.

About how many items did you choose?
It’s a lot! There’s more things coming and things that didn’t get here yet. A lot of things are tied to the book [Beauty from the Inside and Out], like a lot of the wellness supplements. I couldn’t believe all of the women that were buying Adidas sneakers today.

Why was it the right time to change things up?
There was such a new shift in our industry, and I believe that things have to be done differently. I could not be more happy that I have the opportunity to do what I did 25 years ago, which is to have an empty space and just come up with cool things. I said to one of my friends here, I have no clue what I’m doing, I just make s**t up. And he said, well you do it so well! [Laughs]

What are you doing differently with justBobbi?
First of all, at a brand, you come up with a great idea, and then probably 20 to 30 people discuss it, and then it takes another 18 to 20 months to get it done. The amazing thing here is I send a picture and all of a sudden it’s in the store. I’m not sure how they do it, but they have a great team and they pull things quickly together.

NEW YORK, NY – APRIL 17: A view of atmosphere as Lord & Taylor and Bobbi Brown celebrate the launch of the justBOBBI concept shop on April 17, 2017 in New York City. (Photo by Cindy Ord/Getty Images for Lord & Taylor)

What was your initial vision for Bobbi Brown?
I started Bobbi Brown with lipsticks that look like lips. As a makeup artist, I thought, why don’t I just make lipsticks from the colors I’m always mixing? It was just a concept. Then I said, well, I guess now we need lip pencils. Why don’t I do lip pencils the exact color of the lipsticks? How about a foundation that looks like skin?

You make it sound easy.
To me, things are easy.

How did you land on the name?
“Just Bobbi” has always been the media side of me, and it’s my Instagram, so it just made sense!

How did you choose which categories to include?
I spent the last twentysomething years in beauty—it’s my passion and it’s what I love, but lifestyle has been really important to me. I believe that how you live your life affects how you look. It’s exciting to be able to go into new categories. I did eyeglasses a couple years ago, and who knows what else will happen.

Are you relieved that you aren’t obligated to discuss beauty anymore?
I am really happy and excited that I get to truly be myself and be authentic. That’s really all that matters to me.

When did you feel like you had made it?
There’s been a lot of different “made it” moments for me. Certainly having a Vogue cover was one, selling the company to Estée Lauder was another, and celebrating 20 years at NBC was pretty cool.

Speaking of milestones, you just celebrated a birthday! What’s the best birthday gift you’ve ever received?
My husband buys me beautiful jewelry every single year—it’s the best thing. This year, a lot of people bought a donation to the charity I started called the Pretty Powerful Campaign.

What’s the latest with the New Jersey inn you’re renovating, The George?
My husband is a developer and he’s renovating the hotel, and I’m helping with all the visual parts of it and the experience. The George has its first product, a candle, and it’s in the justBobbi shop now. There’s going to be a pop-up in The George, too.

When does it open?
September! If you ask my husband, he’ll say July, but it’s September. It will be a soft opening.

What are you summer plans?
Not to put things on my calendar in July and August, and do some family things.