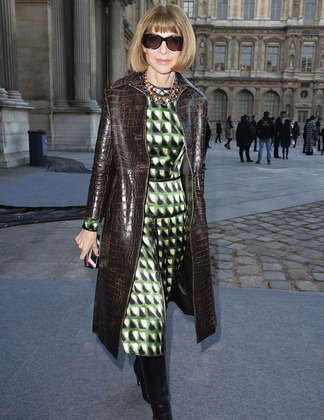 Don’t like the Kimye cover? Anna’s sorry, but not sorry! Last night Kim Kardashian and Kanye West were spotted at din din at The Waverly Inn with new bestie Anna Wintour at their table, according to Popsugar.com. Kim was coming from an appearance on Late Night with Seth Meyers, where she made it clear she doesn’t seem to care that so many readers aren’t feeling the cover. “Kanye’s the first rapper, I’m the first reality star, we’re the first interracial couple [on the cover],”  said Kardashian. She also told him that she didn’t know they were shooting for the cover…and that she didn’t tell her sisters about it. “It’s the biggest dream come true and I’m so honored to be on the cover,” KK told Meyers. So there’s that.

Look Of The Daily: Garrett Neff in Ferragamo