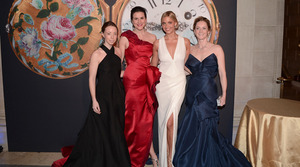 Lush gowns by Donna Karan, the bash’s sponsor for a second consecutive year, abounded on the eve’s chair(wo)men, like Olivia Chantecaille and Lydia Fenet (in the brand’s Atelier line) and Genevieve Bahrenberg, Clare McKeon, Sloan Overstrom, Joann Pailey, and Rickie De Sole Webster in Donna Karan New York. Standing out from the be-gown-ed or tux-ed up majority? Lulu Frost’s Lisa Salzer in a beaded and color-festooned cocktail-length number, and that dude wearing a crimson suit and pirate hat, to name a few. Midway through the eve, more than a few heads whipped ’round at the arrival of a certain frothy, positively Marie Antoinette number through the crowd, flanked by two dandies donning tophats and round wire specs. As the trio moseyed through the galleries, it was insta-Bill Cunningham bait; quite the shoot ensued.

As the crowd clamored for bubbly at the bar stations surrounding the Garden Court, a curiously neglected Glenlivet tasting table meant more 21-year-old scotches for the taking. Aliza Licht, princess-ed out in tiers of raspberry ruffles, advised doubling up on a champagne order instead of fighting the throngs again. (Wise words, perhaps worthy of a tweet, @DKNYPRGIRL.) For those nibbling in addition to imbibing (dancing requires sustenance, after all) those seared cubes of lamb skewered with rosemary sprigs, awaiting a dip in a mint aioli, were a hot one on the hor d’oeuvres circuit. “We’re basically stalking our dinner,” said one chicette with a slight eye roll as her male companion chased down a waiter and promptly housed two skewers in one deft gulp. French toast disks topped with rounds of beef tenderloin, petite crab cakes, and cute pies of the apple crumble and pecan varieties also proved popular. For those bigger on the drinks than the noshes, it was vodka, Lillet, or bust in the shindig’s final hour or so. Everyone survived.

Chatter on the bathroom line involved swapped compliments on frock choices du evening, and—ever the reminder of the gala circuit in full swing—detailed discussions on what to wear to the next dozen events of the season ensued. Proper planning, ladies! Rihanna and Katy Perry jams brought the crowds to full dancing gusto by 10:30 p.m. (it wasn’t just the ladies of the eye who seemed to know the lyrics, by the way). Even the waitstaff stationed behind massive silver bowls of shrimp cocktail and surf and turf-y platters (tell us your prosciutto purveyor, please?) shimmied reticently, and subtly, in beat with the dancing masses.

In keeping with the eve’s clock-centric theme, more or less, the Hannah Bronfman-spun tunes stopped reverberating through the galleries a smidge past midnight, per the invite. Thus, the crowd politely bum-rushed the coat check to fetch those furs and, if their cars weren’t stationed outside already, wrestled with that kinda-tricky Uber app. Almost warm enough to hobble home up or down Fifth, but not quite…
ALEXANDRA ILYASHOV

Sunset Time, All The Time

Could Cara Delevingne Return to the Runway?...

Ciara Is the New Face of Revlon,...