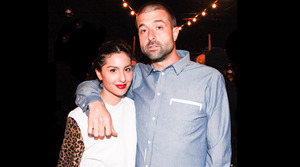 (NEW YORK) The who’s who of the indie set descended upon the Bowery Hotel on Wednesday night to fête quarterly culture glossy, FRANK151 magazine, and the launch of its 51st installment featuring the likes of artist Curtis Kulig, Jake Burton, Jenne Lombardo, Reformation, and Eddie Huang. The big news of the evening? The collectable pocket-sized reader, which has been gratis since its inception in 1999, will now retail for $10 in a larger book size, and will be available for purchase at its usual boutique lineup, plus at new partner Barnes & Noble. We caught up with founder and publisher Stephen Malbon pre-party to get all the nitty-gritty. Ready to get FRANK’d up?
BY MARIA DENARDO

Did you always want to start a magazine?
In the ’90s, I was going to the Art Institute of Atlanta, and I was in an electric pre-press class where we had to lay out a magazine, so I decided to just start my own. At that time in Atlanta, we didn’t have the kind of magazines that New York and L.A. had. For example, New York had access to Flyer, this little city guide ‘zine that featured clubs, nightlife, and music. I tried to do that in Atlanta, selling ads to local bars and clubs that my friends owned or worked at. For content, I called four or five of my friends in Atlanta—they were basically the lowest hanging fruit around me. A few of those friends are much bigger now, like DJ Drama who’s a successful DJ and producer, or Klever, who was in the first FRANK as a DJ but later went on to win the DMC World DJ Championship contest.

For those who don’t know, how is each issue organized?
Each issue is either about a place, idea, or a person’s perspective. One time we did a love revolution theme, for example, which was all about the world needing love now more than ever. We brought in Lenny Kravitz to curate that edition. Each time we enlist a curator, it really broadens our rolodex. This way, the book maintains a circle of underground friends, and everything is organic.

Who else has curated past issues?
We’ve done 51 editions and had about 30 curators. Rohan Marley and Cedella Marley curated a book about the morals their father thought or imbedded in them. Mister Cartoon, a tatto artist, and Estevan Oriol, a photographer in L.A., have also curated. Lysa Cooper did the erotica issue for us. There’s a long list!

How much fashion content is in your issues and is that important to you?
The whole magazine is full of fashion because we shoot everyone in what they’re already wearing. It’s not important to me to get stylists to pull sweaters to put on people. What they’re wearing is really fashion, and it’s relevant. I’m looking at a photo right now in the magazine. The guy is wearing a nice black trench coat. It can be any brand, but it doesn’t matter and we don’t say what it is. It’s a trench coat, it’s cool, and it looks nice. Fashion is important to me as an art. I’m not interested in the mentality that’s about ‘so and so pays me ads, so we make people wear their clothes in our photoshoot.’

Has your reader changed in the last decade or so?
When I started FRANK, and the reason why we’re still doing it today, is that we had a good product, but a shitty audience in Atlanta. There’s only a certain amount of likeminded, progressive people there, so when we started selling ads, I was sending books to New York, L.A., and southern California because that’s where most of the surf and skate brands are. We became an outlet where underground and emerging artists could get there work published. That’s still true today, but now we’ve gone international and we print in multiple languages.

Have other indie mag start-ups affected your magazine?
After we launched, there were about ten magazines I can think of that did something similar to what we’ve been doing. But most of them aren’t still around. We’ve been doing it for 13 years. In terms of publications on the internet, I see companies like i-D and Vice getting a crazy amount of traffic and followers, but I think people come to FRANK for a different reason than that.

Who do you consider to be your competitor these days?
The competitor is really ourselves, and the internet. If we make a video and 100,000 people watch it, that’s a fine number and I’m not upset about it. But that’s pretty low when you factor in that millions of people own iPhones. But we have an advantage because we can curate authentic content through our relationships with the artists and curators that we’ve worked with forever.

Why did you increase the size of the magazine after all these years?
We’ve always had a small size because it was cheaper to produce. Our magazine has been free for 13 years, distributed at boutiques around the world like Supreme, Colette, and Opening Ceremony. But the size change honestly has to do with our deal with Barnes & Noble; they were afraid our audience would steal [issues of the magazine]. But I like the larger size because it’s a more comfortable read and more space to work with.

What’s the reaction been like regarding the new $10 price tag?
A lot of our stores that have been giving it away for free for so many years are excited about the opportunity of selling them. We’ve never been able to make enough to supply the demand. For example, if we send Supreme 300 copies in L.A., they’re already gone in the first weekend. Kids take handfuls of them. They’re very sought-after.

How did the Barnes and Nobles deal come about?
I did an article on Abel Ferrara, who directed the movie King of New York. His right hand man’s wife is the general manager of Barnes & Noble Union Square in New York. His wife was like, ‘God bless you for doing this, but please start selling them!’

Does the larger paper size entice new advertisers?
I don’t want to say who said it, but one time this potential advertiser said, ‘Our brand image is way too big for that small paper!’ I couldn’t believe it. For that one hater, it should help, but I don’t think that really matters; your logo is strong no matter what size paper it’s printed on. I think what helps is just partnering with a new publisher and a chain like Barnes & Noble. That opens up different options and adds a trust factor.

What are some of your long-standing advertiser relationships?
Vans, Burton, Scion [a Toyota car], Casio, and Sailor Jerry Rum.

What’s your most memorable moment at the publication?
About seven years ago, I went to Tokyo for the first time and got to see how people were freaking out about the magazine. They know more about FRANK than probably I do, in a weird way. Now, we publish in Japanese.

The 51st issue is themed around leaders. Who’s your favorite leader?
[laughs] Myself.

What kind of a leader are you?
I try to make sure to hire people that are smarter than me. If that happens, I should be straight.