A Backstage Moment with David and Phillipe Blond 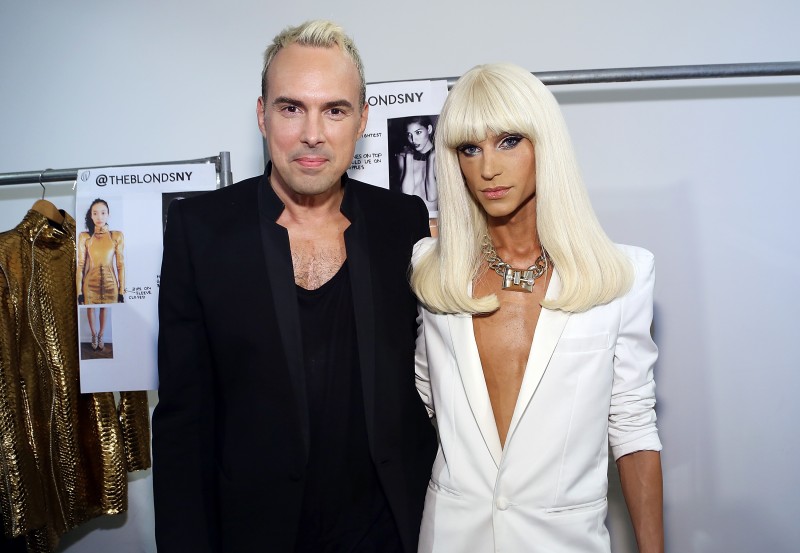 It’s always fun backstage before The Blonds! We chatted with the design duo—David and Philippe Blond, who are not only an excellent team but also experts at finishing each others’ sentences—before the Egyptian-inspired runway show kicked off…

How are you feeling tonight?
Phillipe: I’m feeling great! I’m really excited.
I love the interviews you gave for the piece on designers and their parents that we published this week!
Phillipe: Oh my God, yes! That was one of my favorites.
David: It was really sweet.
Philippe: I’ve been meaning to send that to my dad. I’m going to need a minute for that…I feel like I’m going to cry when I do.
It was so sweet! Do you have any tips for parents today?
Phillipe: Let your kids be themselves.
David: And just encourage them to do what they want to do at a young age, because typically whatever they’re interested in when they’re younger, that’s what they’re going to end up doing later on in life. No matter how much you fight—I went through the same thing. My mother was always conflicted, but in the end she realized and encouraged me to do what I really love.
That’s great advice. Are you going to celebrate after the show?
Phillipe: Oh my God, yes!
David: We’re going to do something at The Electric Room. They’re hosting a party for us. And then our favorite…
Phillipe: …Fried chicken and waffles!
David: That’s our tradition now. We go home and order chicken and waffles.
What’s the best chicken and waffles you’ve ever had?
David: Red Velvet waffles with fried chicken and really good maple syrup.
Phillipe: Really, really crunchy, crispy fried chicken.
David: You know that place on the Lower East Side? It’s so good.
Phillipe: And the grits! So good.
Sounds delicious! Is there a model you’re excited about this year?
Phillipe: I’m always excited about all our girls, but one in particular…
David: …that’s been with us for our very first show, Lyoka. She will be opening and closing.
And Madonna is in town…What’s your favorite song?
Phillipe: They’re all my favorite, and I’m going to see her tomorrow night.
David: We bought tickets for tonight, and then we had to change them!
Phillipe: Yeah! But I am a rebel heart. We are rebel hearts! So we’ll be thinking of her tonight.
Have you ever designed for her before?
Phillipe: We dressed her for Living For Love, the video. It was great. We’d been working with B. Akerlund with several different things before, but we finally came together with that project they were doing. And we ended up being in a different part of the video, at the end, which was really great, a beautiful feature.
I have to go watch that now!
Phillipe: Yeah it’s really great. She does this thing where she defeats the bull.
David: She’s wearing this rose-colored corset.
Phillipe: It’s a metaphor.
David: [laughs] It’s a metaphor!