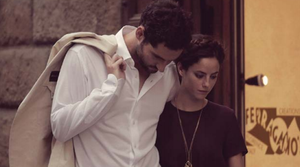 One way to showcase your clothing is to build an entire film around it. Ferragamo has debuted a teaser episode of their short film “Walking Stories” directed, written, and produced by Luca Guadagnino who is a contributor to Carine Roitfeld‘s CR and is more widely known for his film “I Am Love” presented at the 66th Venice Film Festival. The first episode follows a barefoot, but Ferragamo-clad Sara (played by Kaya Scodelario) as she runs through the streets of Florence, drops a love note and runs into her old friend Alicia (played by Nathalie Buscombe), a flighty American from the South who takes her to lunch as Sara begins to explain how she ended up with no shoes. The second episode finds Sara in a flashback in Echo Park, Los Angeles where she’s running away from her commitment seeking boyfriend. She then makes her escape by hopping into an unknown man’s Bentley. Chic, non? Stay tuned for the next episodes, which will be released bi-weekly and stars other up-and-comers like Lee Roy Kunz, Billy Magnussen, and the iconic Lauren Hutton. Perhaps, branded short films are the new fashion advertising frontier? Take a peek below at episodes one and two: