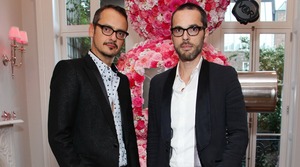 (NEW YORK) It’s a pivotal year of sorts at Viktor & Rolf: besides celebrating two decades in biz, the Dutch design pair is hitting Paris’ haute couture calendar for the first time in 13 years. Viktor Horsting and Rolf Snoeren‘s return to couture was officially greenlit on Friday, according to WWD, when the label was named a correspondent member of the couture calendar by the Chambre Syndicale.

Viktor & Rolf’s couture roots date back to 1998, five years after the line’s launch. During their brief, two-year foray into couture, ending in 2000, the designers industriously churned out five couture collections. Ready-to-wear debuted in the same year the designers stopped doing couture; by 2003, menswear was part of the Viktor & Rolf repertoire. Things took a fragrant (and lucrative) turn for the label circa 2005, with the roll-out of their first fragrance, Flowerbomb. The scent was released in tandem with L’Oréal. In 2008, Diesel founder Renzo Rosso snapped up a controlling stake in the brand, under OTB SpA, Rosso’s holding company.

Expect the duo’s couture creations to be available for sale. Also happening in Paris for the brand: their first boutique in the city of lights, with the exact location yet to be determined.