The Observer Turns 25: Better Than Your Quarter-Century Birthday Bash 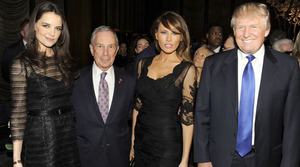 (NEW YORK) As any swell anniversary party strives to be, The New York Observer sort of came to life for a night as it rang in 25 years of its pink-paged presence in, and gossiping about, the city’s power circles. How to translate that slightly plucky, swooning-over-clout attitude into a tasteful, packed bash at the Four Seasons Restaurant off Park Avenue?

Have Mayor Michael Bloomberg make the intro remarks, for starters, and toss in a bunch of Trumps, plus a dizzying array of biggies across the board (politics, Hollywood, fashion, real estate, et al.) See: Harvey Weinstein, Ron O. Perelman, Cory Booker, Katie Couric, Larry Gagosian, and commissioner Ray Kelly. Oh, and the aforementioned were (just a few of) the event’s hosts, by the way. Also, tuck caricaturists in the corners of the bodies-pressed-together shindig, of course, so guests can get a cheeky ego kick via a faux Observer cover moment (Katie Holmes even got sketchy!). Check, check, check…

When the mayor took the mike, an inevitable quip about publisher (and Trump-in-law) Jared Kushner’s prodigious age to hold such a gig had to be had.  “When I heard Jared was having a 21st birthday party, I wouldn’t miss it for the world!”

Après Bloomberg’s intro, your Daily pondered the chic set’s ideal way to eat salmon, that distinctive pinkish hue of the weekly paper du honor. Medium!” crowed Dennis Basso. When it comes to Basso, the observer, manners are king. “I think table manners are very important. General courtesy to people around you matters, too. It’s about doing the right thing!” Basso said with a trademark chortle and a broad grin.

“I don’t eat salmon fish! I like the color on the paper, but not on the salmon itself,” said Carolina Herrera. To each her own, cheri! Other fashion types on deck included SUNO’s Max Osterweis, Stacey Bendet, Simon Doonan, and David Lauren.

Another salmon naysayer, of the runway-walking, not designing, variety? Hilary Rhoda. “It’s not one of my favorite fishes. If I get sushi, I go for tuna or yellowtail,” remarked Rhoda. As for her most observant tendencies? It’s a well-mannered two-for-one with this mod. “I’m very punctual; grammar is big for me, even when I’m texting.”

Speaking of grammar freaks and deadline junkies, Joanna Coles, Linda Wells, Stefano Tonchi, and Joe Zee were on deck.  Also carousing about for the occasion, delightful disparate in their fields and claims to fame: Daniel Boulud, Spike Lee, Christine Baranski, and Padma Lakshmi.

There were ample nibbles, or a full dinner, if desired, those that could weave through the packed scene with more than, say, a (generous) pour of rose bubbly in tricked out, coppery latticed bottles specially designed for the eve. Pepper-crusted sheets of ruby-hued rare tuna, a few fancy iterations of meat and potatoes, and more was for the taking at a buffet, with plenty of passed morsels, heavy on the seafood, too.

If this is what 25 looks like, guys, we’re waiting with baited breath for the big 5-0…
ALEXANDRA ILYASHOV