The Gap Goes With The Newbies for Spring 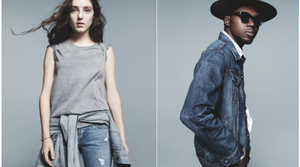 Today, Gap launched their “Lived-in” campaign starring a cast of characters you’ve likely never heard of. The roster of emerging artists, captured by David Sims, include Birdy and Anna Calvi, actors RJ Mitte and Julia Garner, photog Lina Scheynius, and musician Theophilus London. Look for the campaign to roll out in print next month. Spring also marks the eagerly-anticipated first collection designed by by Rebekka Bay.