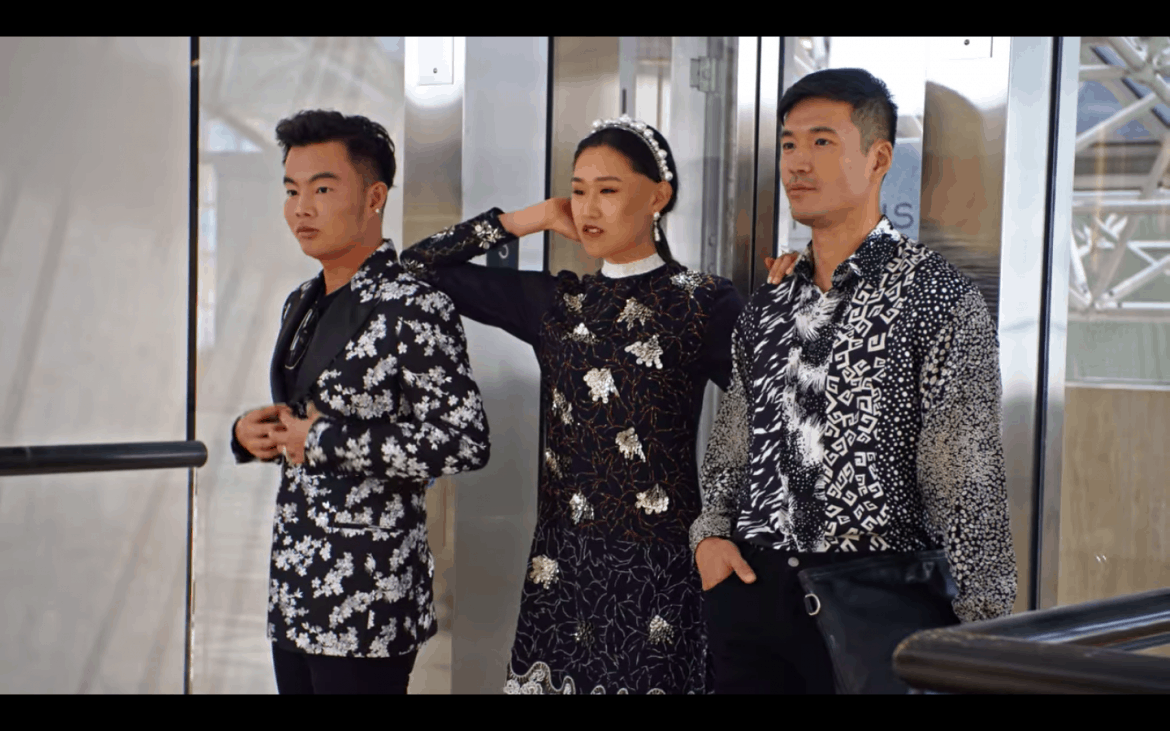 Your newest TV obsession has arrived! The reality show Bling Empire follows a group of wealthy Asian Americans living in L.A. and it has quickly climbed the Netflix charts after debuting this past weekend. Outsider Kevin Kreider is the program’s central figure; a model who becomes part of the show’s high-society friend group of millionaire and billionaire socialites Anna Shay, Christine Chiu, Kelly Mi Li, Kane Lim, and Cherie Chan, as well as DJ Kim Lee, hairstylist Guy Tang, and influencer Jaime Xie. In short, it’s basically like Crazy Rich Asians—except in real-life.

The show has filled the Keeping Up with the Kardashian and Gossip Girl-shaped voids in our hearts—and not just because of the drama (of which there is plenty), but due to the fashion too. Whether they’re attending dinner parties, meeting shamans, or partying at an array of glamorous events likely to shut down Rodeo Drive, there’s no shortage of mind-boggling style on display in every frame.

Thanks to brands like Dior, Cartier, and Louis Vuitton, the cast’s day-to-day interactions look like a verifiable fashion show. Below, we’ve highlighted our top ten favorite Bling Empire fashion moments for your viewing pleasure. 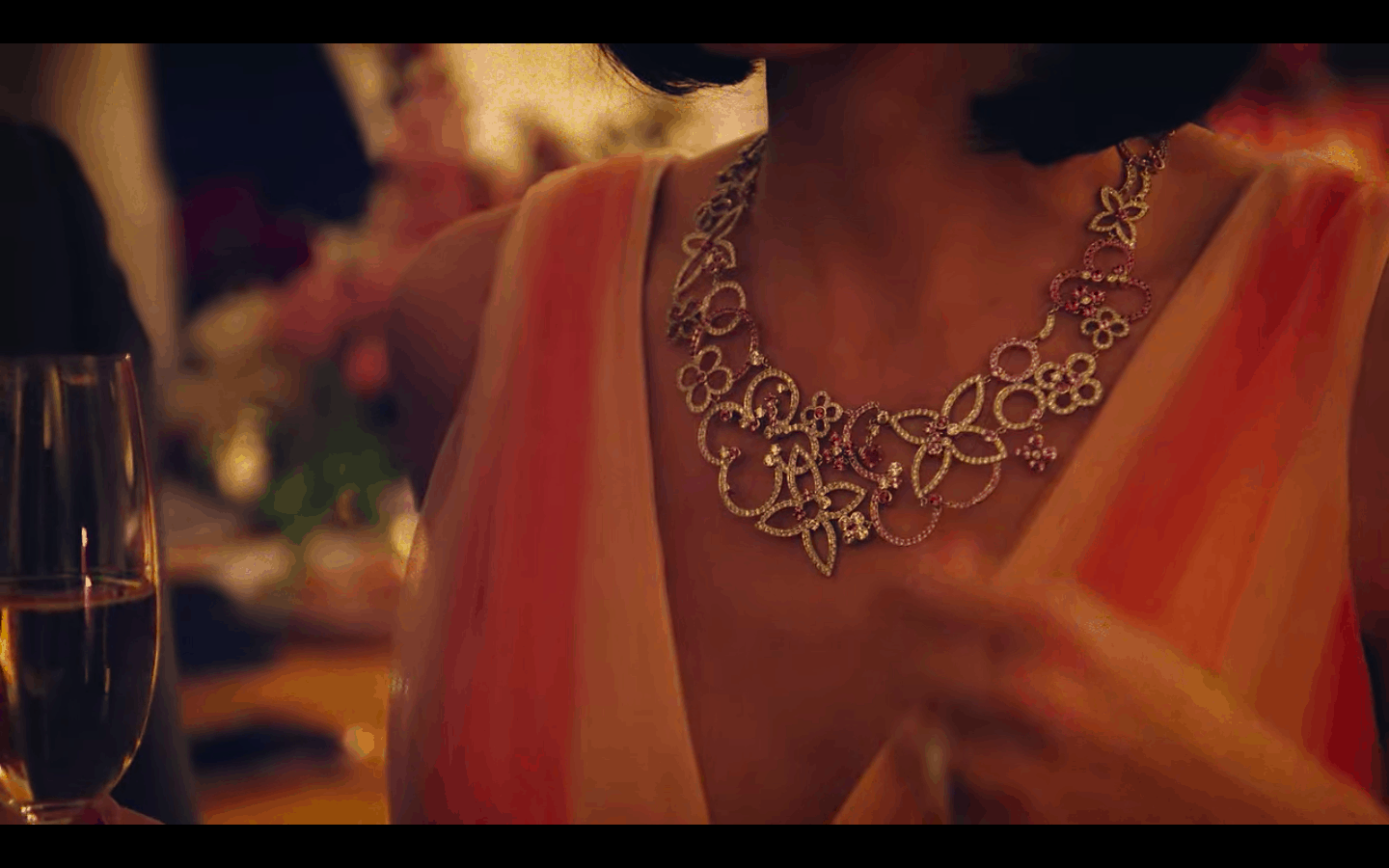 In the first episode, Christine dons a Louis Vuitton High Jewelry necklace to matriarch Anna’s dinner party. Naturally, as Anna finds the show-off display “annoying,” this plan quickly backfires and Christine is moved to the end of the table. However, like Christine says, “More is more” when it comes to jewelry. And this exquisite piece, made up of bejeweled LV monograms in diamonds and pink sapphires, definitely kicks off the series with a major statement. 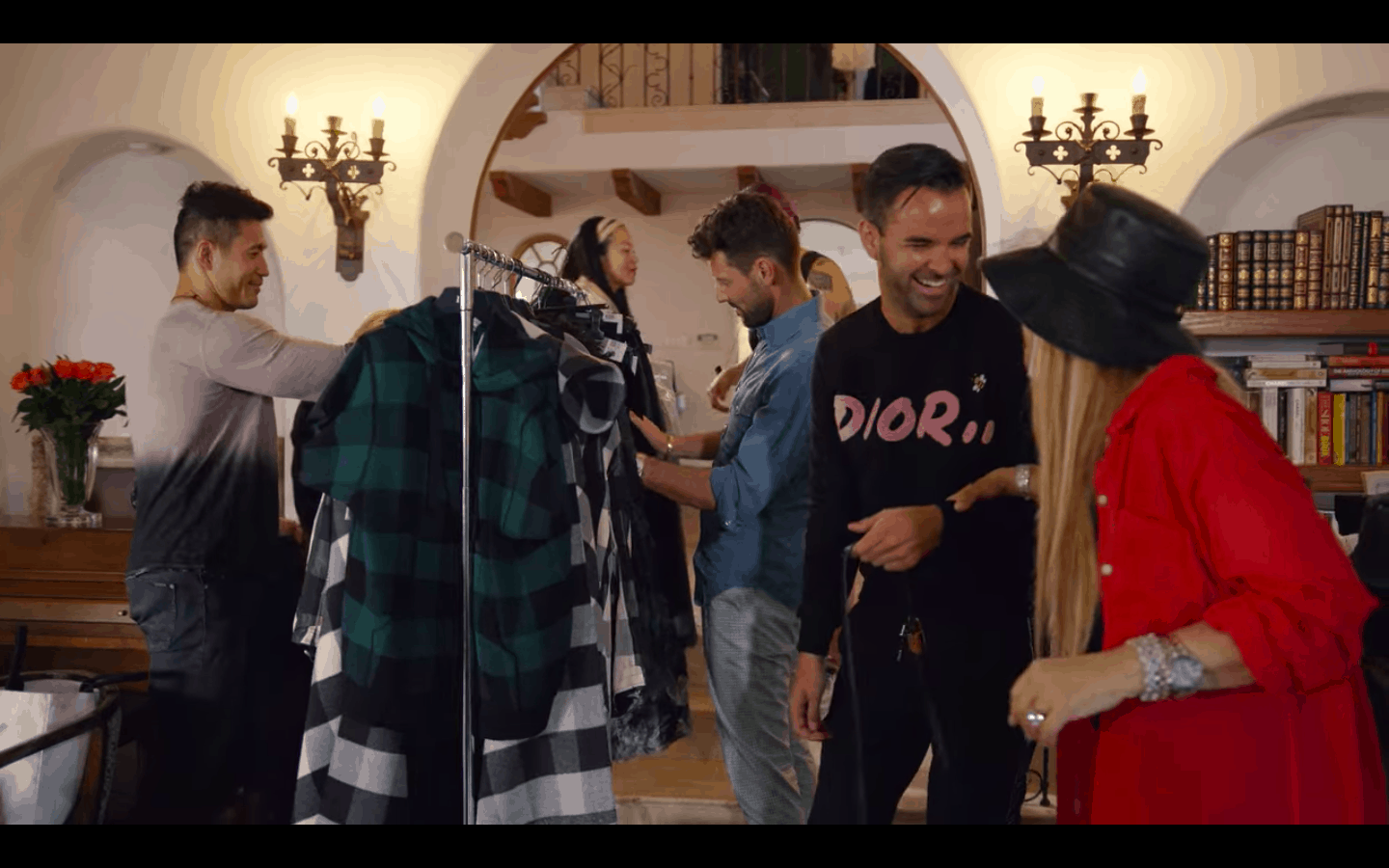 When you’re a top Dior client, why go to a showroom when you can bring the showroom to you? Kevin’s introduced to the one percent’s preferred way to shop when Anna orders a Dior collection to be sent to her home—complete with attendants!—so she can try it on. We can’t say we blame her. After all, wouldn’t you love to shop in-person for designer goods without having to leave the house? 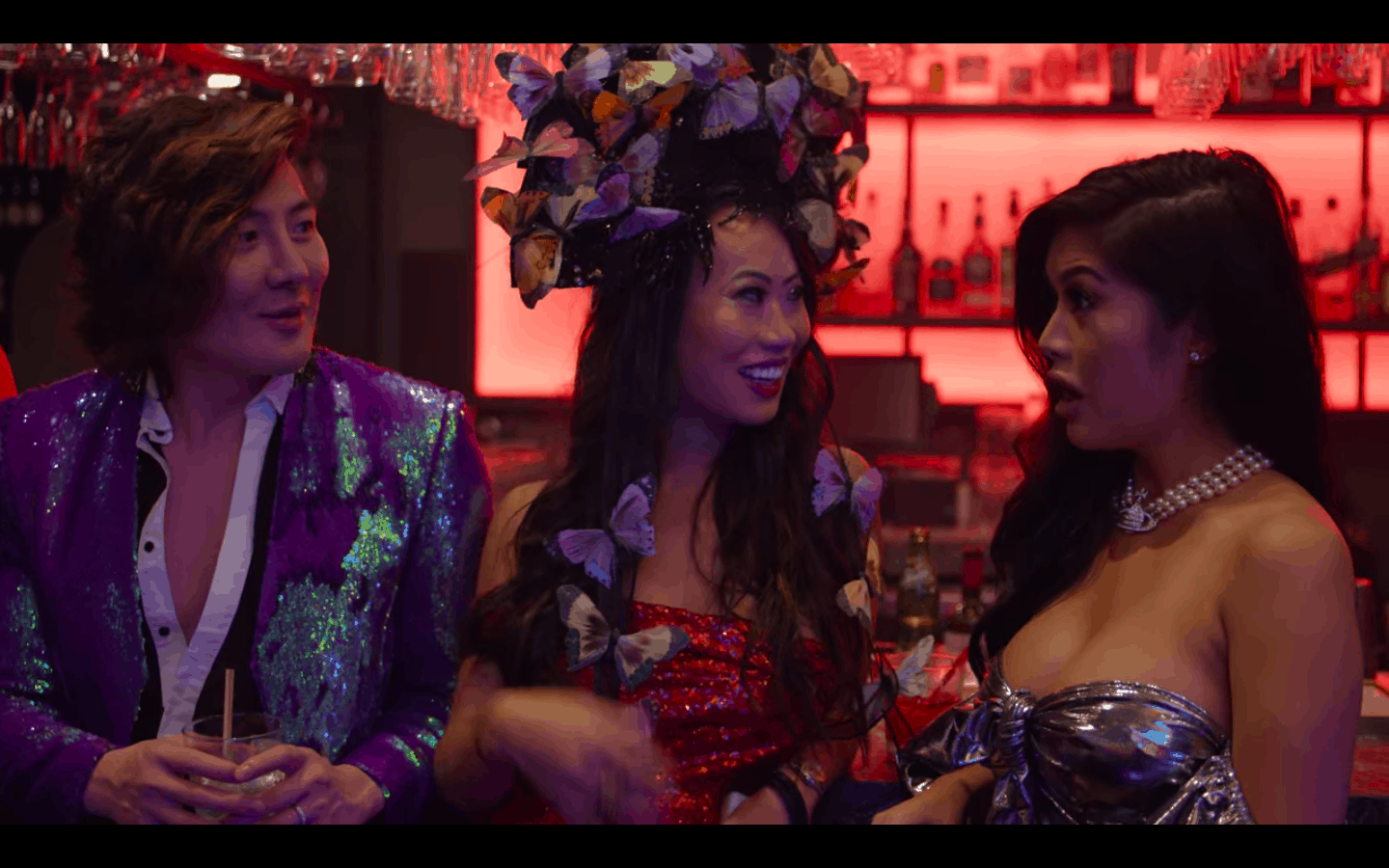 Though Kelly’s style is typically understated and minimalist, the entrepreneur opts for a stunning sparkling red gown for her Moon Festival party. Complete with a dramatic butterfly headdress and hair embellishments, the ensemble is truly a sight to behold. However, she isn’t the only star that brings her fashion A game to the party. From Guy’s sequined blazer to Kim’s Vivienne Westwood pearls, this event is a particularly stylish affair—with a side of drama, thanks to an argument that ends in a drink being thrown. 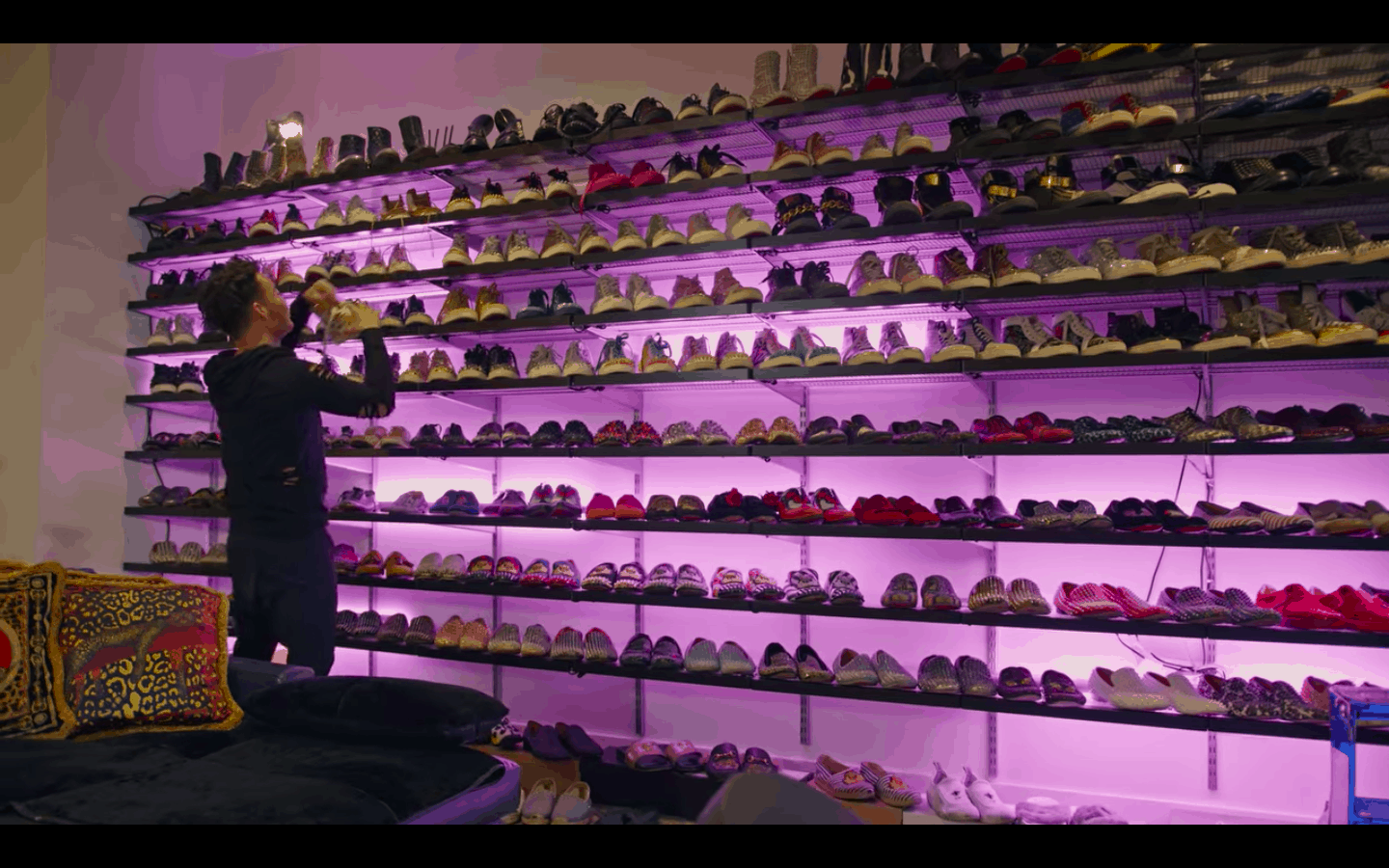 Fans will be quick to recognize logo-maniac Kane’s massive shoe collection, which is prominently displayed (as one’s designer shoe collections are) on a wall of his living room. From studded Zanotti loafers to spiky Louboutin sneakers—and everything in between!—it’s truly a sight to behold so of course we have major shoe envy. 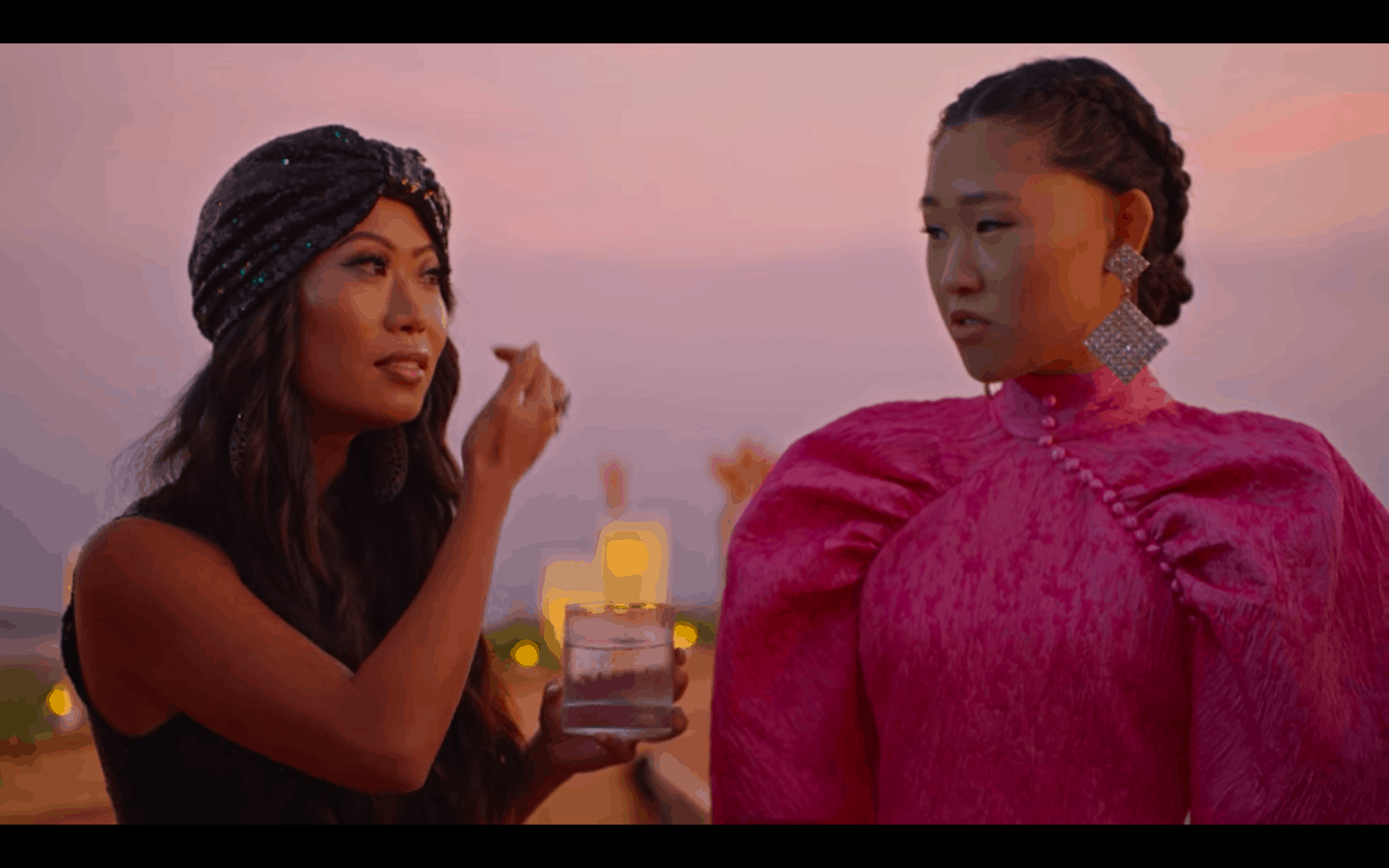 For a dinner Kevin throws at Keith Ferrazzi’s Hollywood Hills home, the girls go all-out. Christine’s frothy tutu with a denim jacket and pumps, Kim’s leopard-print cutout dress, Kelly’s sequin jumpsuit and turban, and Anna’s leather blazer with pearls are all a lesson in effortless L.A. eveningwear. However, the true star of the dinner is Jaime, who’s pink leg of mutton sleeve dress (by Rotate Birger Christensen) and massive crystal earrings make for a total showstopper. 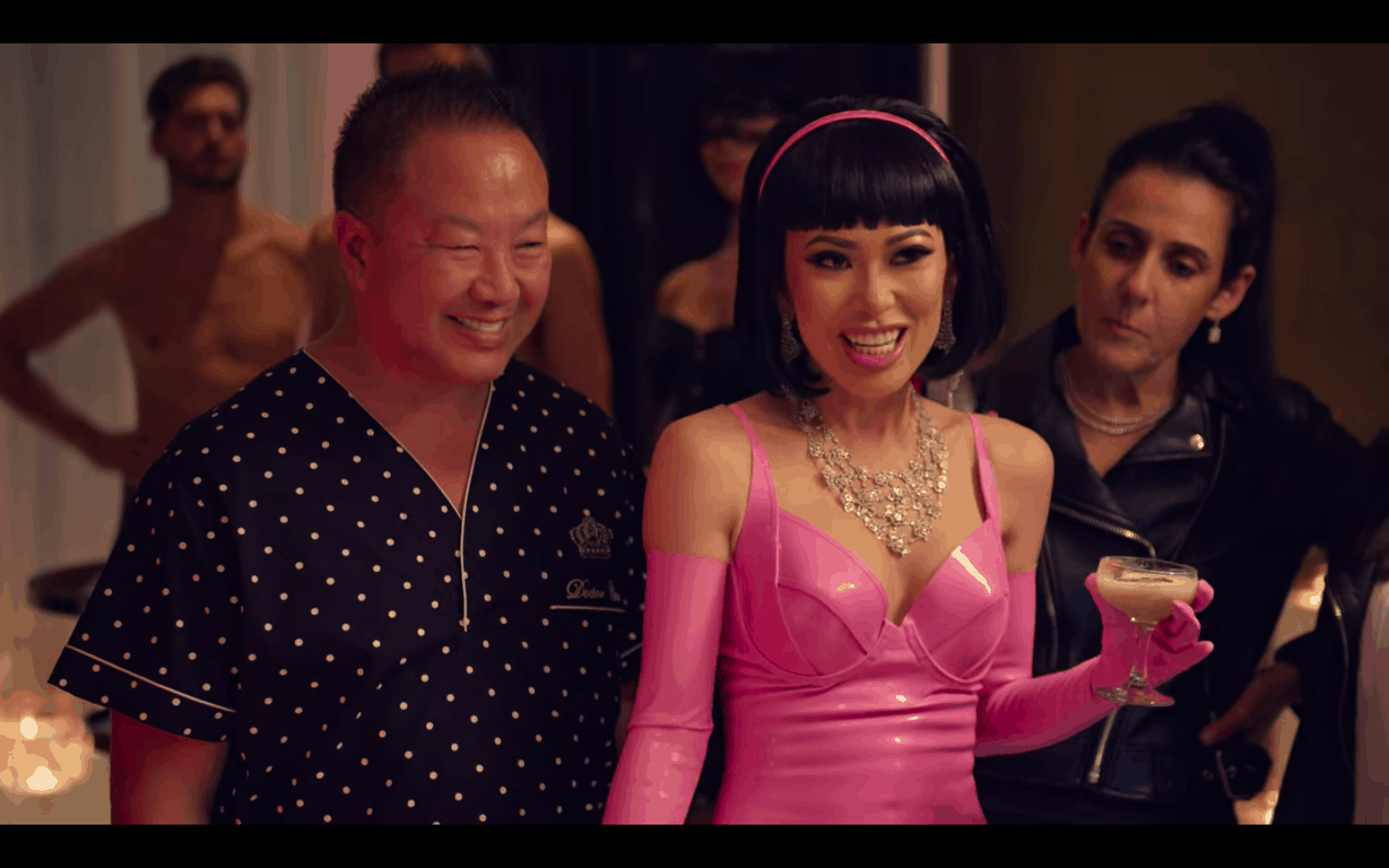 From L to R: Gabriel and Christine Chiu on Bling Empire (Netflix)

For her BDSM-themed party at hwr husband Gabriel’s plastic surgery clinic (which comes complete with a Botox bar), Christine dons a pastel pink latex dress, teamed with matching gloves and statement diamonds. Somehow it’s surprisingly elegant, and the hostess with the mostess certainly stands out from the crowd. 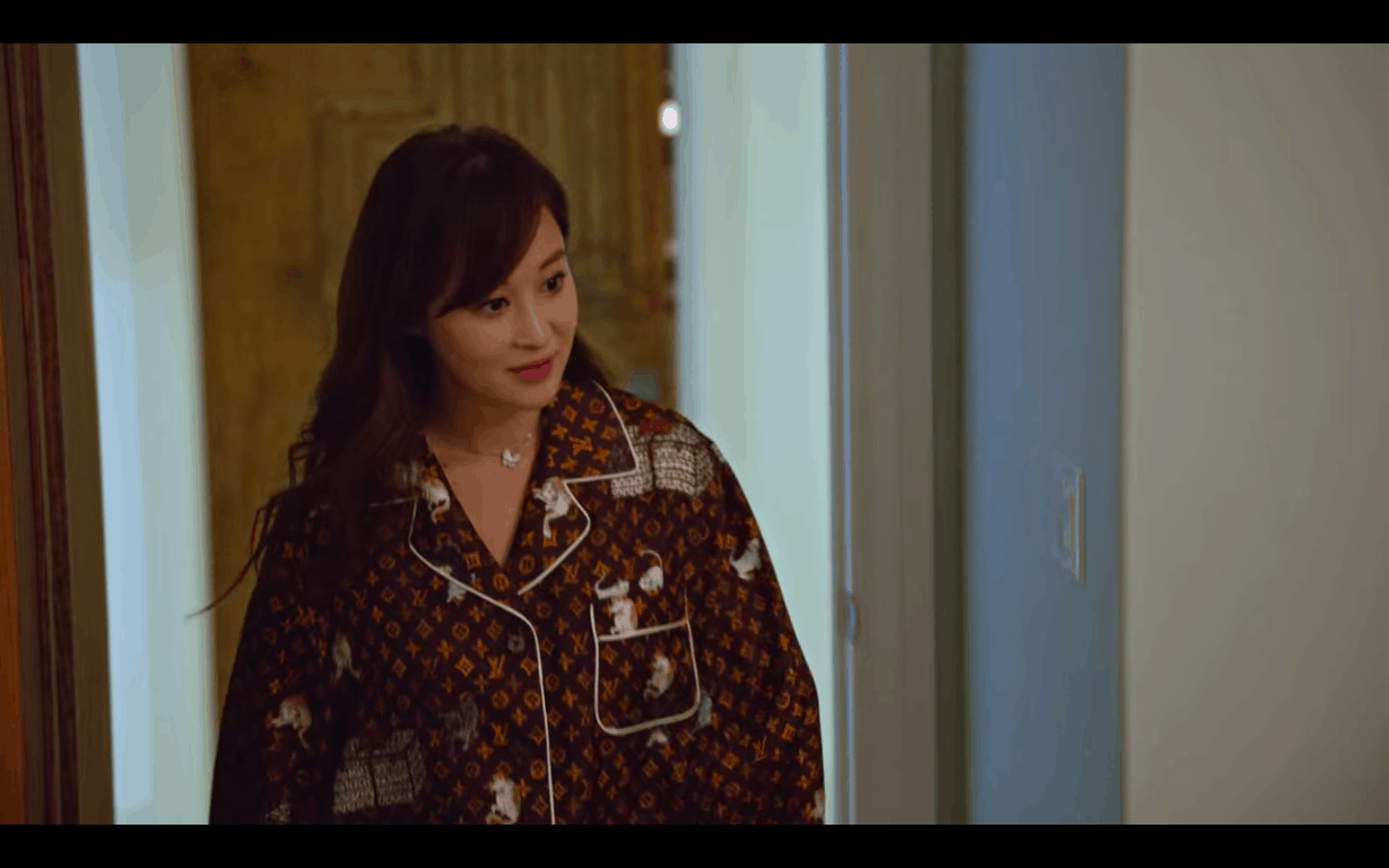 From Chanel and Dior to Gucci and Fendi: Cherie’s wardrobe always makes a statement with designer logos. However, one of her best style moments comes from a pair of Louis Vuitton x Grace Coddington pajamas, which she dons after a visit from medium Tyler Henry. Meow! 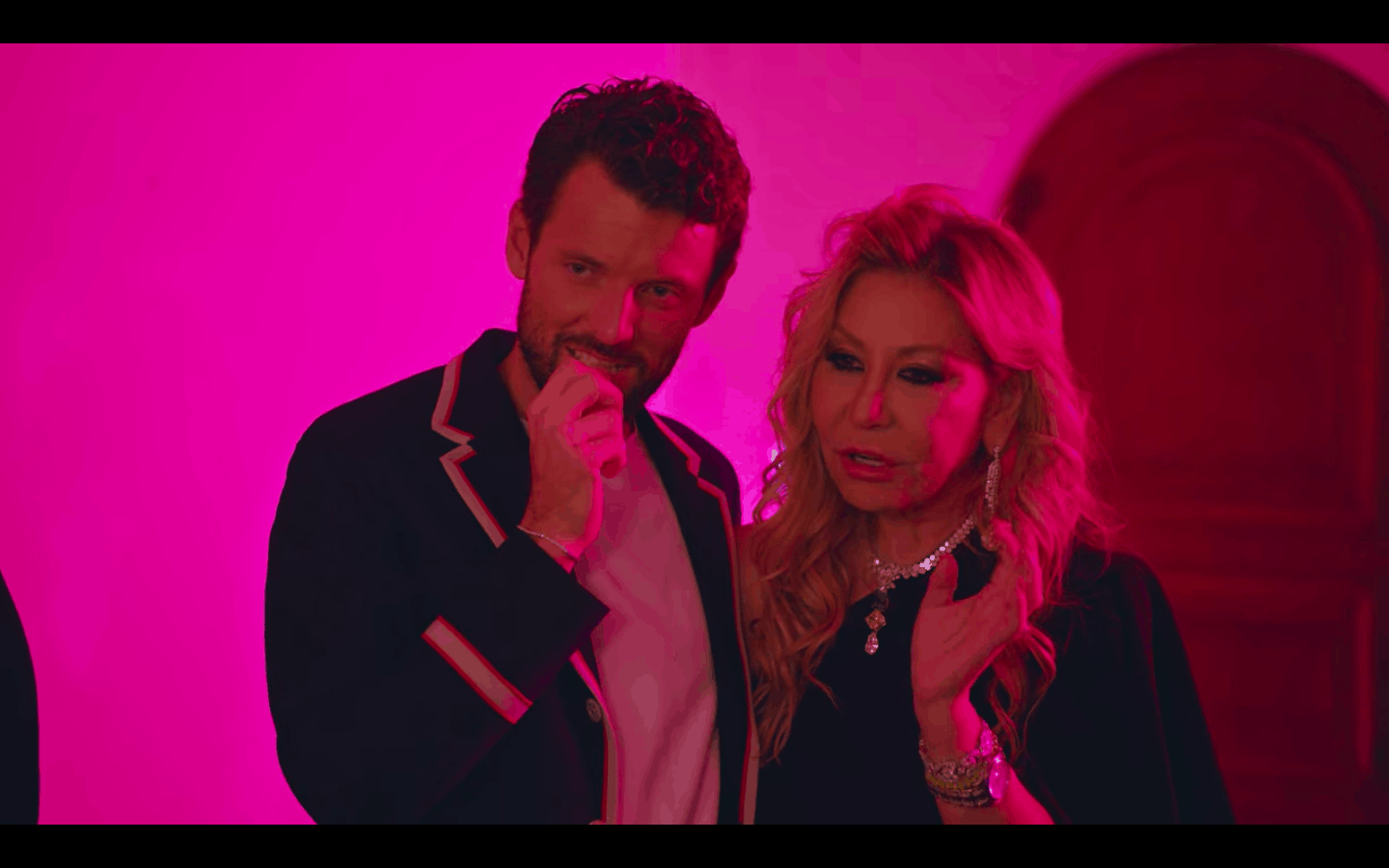 From L to R: Florent Bonadei and Anna Shay on Bling Empire (Netflix)

For her French bestie Florent, Anna throws a diamond-themed birthday bash. “This is to celebrate friends forever, as cheesy as it sounds, and diamonds are forever,” the hostess says, after gifting the Boucheron exec a dazzling diamond bracelet. There’s plenty of bling to go around, from Kelly’s headband to Anna’s stacked bracelets and Kane’s glittering watch.

Shop ’til you drop 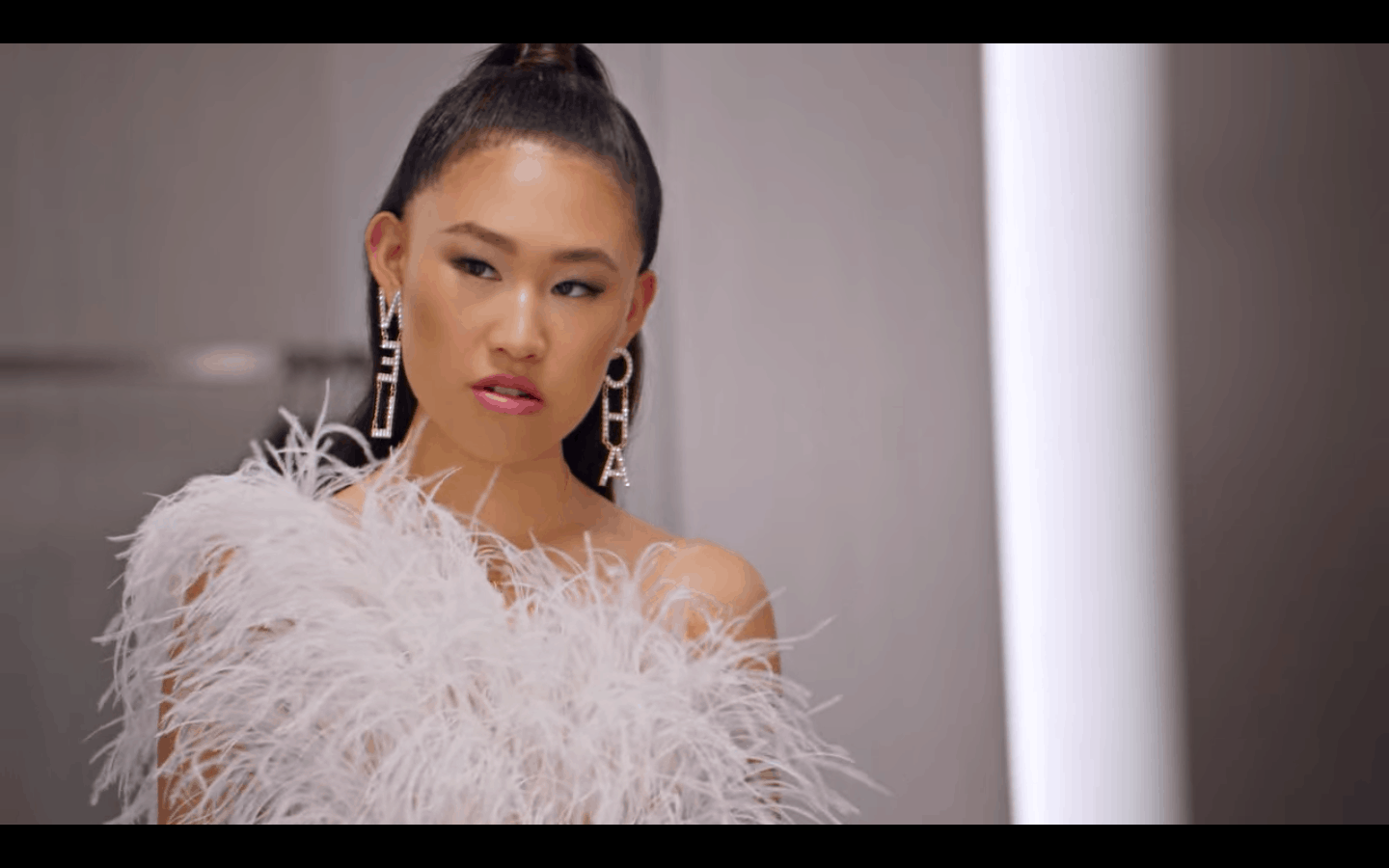 On a shopping trip to Vegas, Jaime’s affinity for statement-making pieces is seen in full force. From a sparkly silver cocktail dress to a blue Gucci jumpsuit, the influencer sure lives for statement fashion. During a visit to Saks Fifth Avenue, she tries on a white feather dress with Chanel’s must-have crystal letter earrings—proving there’s no limit on extravagance, especially when shopping. “I think I can shop for five days straight, from when the stores open to when they close. And actually, it’s not ‘I think,’ I know, because it happened,” she says. We have no doubt! 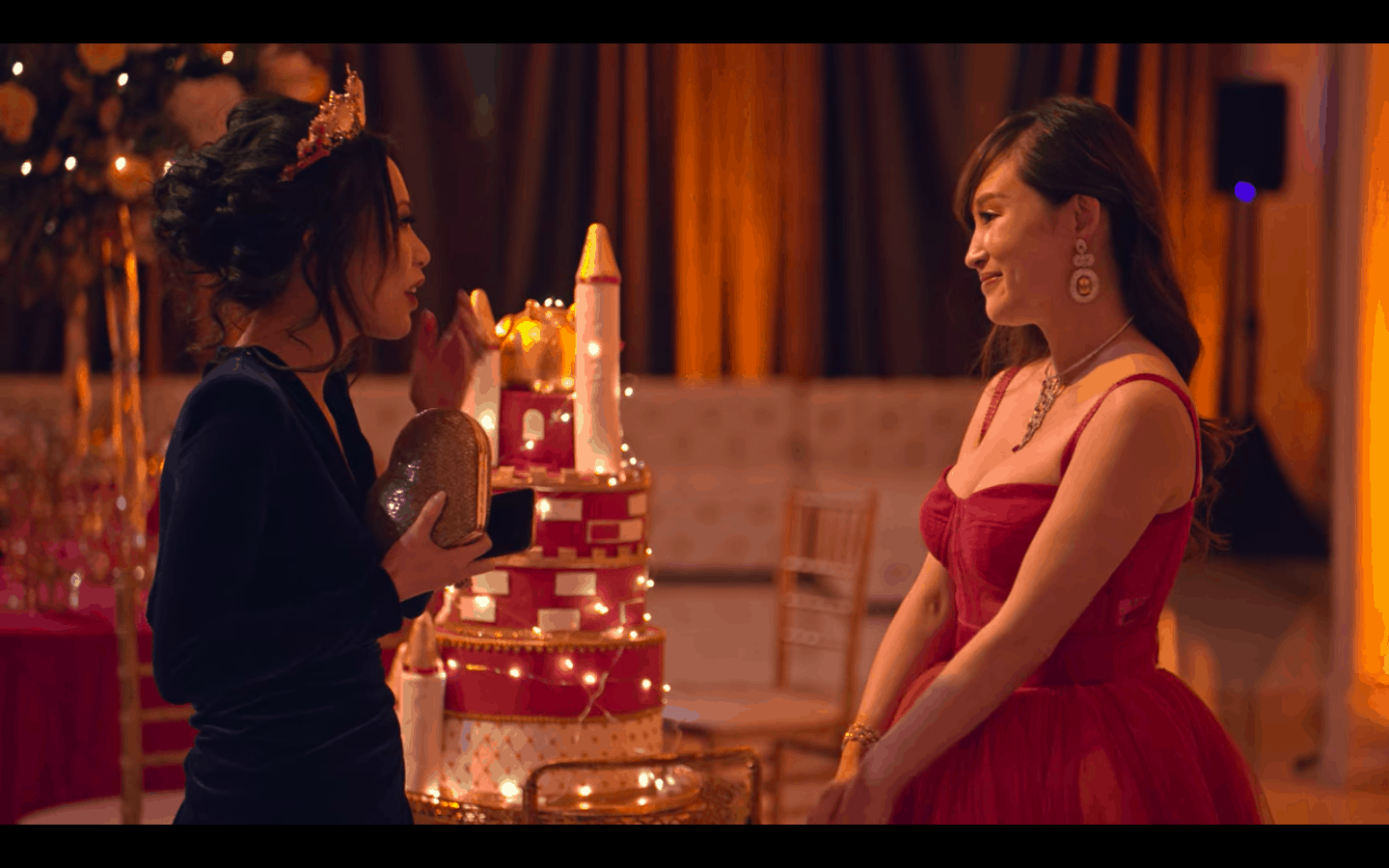 From L to R: Christine Chiu and Cherie Chan on Bling Empire (Netflix)

For the show’s final soiree—baby Jevon’s 100 day party—we don’t know what’s overflowing more: the Moet or the glamour! From Jaime’s blue feather Attico frock to Cherie’s red Dior gown, there’s an endless array of sparkly, embellished, and high wattage outfits. Along with a shocking twist for one of the elite cast’s members, it’s a fittingly fashionable affair for the finale—one that we can’t look away from.

The first season of Bling Empire is now streaming on Netflix.

Bridgerton Season 2 Is Happening! Here’s What We Know