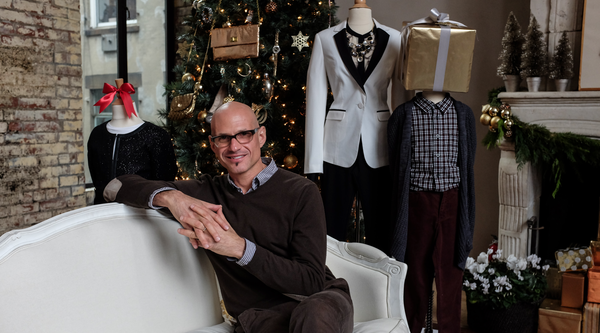 ‘Tis the season for a deluge of parties! Whether you’re on hostess duty or the best guest around, party planner David Stark has a trove of tricks for all things entertaining. He is Target’s main man when it comes to the retailer’s always-epic bashes, after all. Their latest project, Best.Party.Ever., debuts on Pinterest on November 18 for REDcard holders, filled with shindig-plotting tips. Everyone else can get in on the action from December 3 to 14. We got the scoop from Stark at Target’s Holiday House Partyhe set up at 214 Lafayette Street this earlier this week. Pass the bourbon!

What’s the story behind the winter wonderland that you and Target set up in Soho this week?
It was like a living, breathing manifestation of Best.Party.Ever.! It’s everything from accessories to clothing to home supplies to craft ideas. Whether you’re very classically elegant or have a groovier, trendier take on the world, there are pieces for you. We worked on it for about three months—it was a big installation of stuff. It took three days to set up in the space. My goal is to always make it look effortless. Even though it’s never effortless, I want to make it look as if it just…happened.

What’s a genius, simple trick we can crib for the holidays?
Draw with painter’s tape on the wall: Even if you don’t actually have a fireplace, you can draw one! The tape doesn’t mark your walls, and you can draw or write anything.

What’s your go-to holiday tipple?
Bourbon, on the rocks. I love a bourbon tasting bar…and seemingly, so does everyone else.

How do you deal with party planning stress?
Like everyone else, I sometimes suffer from feeling overwhelmed. That’s what Best.Party.Ever. was intended to do: demystify entertaining through a lot of tips and tricks to make things custom and personal. It doesn’t have to be expensive or complicated. A lot of the ideas are really just rethinking everyday materials, used in a different way or they play double duty.

How does Best.Party.Ever. work on Pinterest?
There’s a series of questions which are mostly visual. We’ll take the answers and curate individual custom boards. The pins will link to craft ideas, playlists, and recipes.

Awesome! Is there a certain element of party planning that people tend to overlook?
It’s a social thing, but oftentimes, people forget that being a host doesn’t stop when people arrive. People will be all about the planning and as soon as the party starts, they forget that they have a duty. Great hosts are not done until the last guest leaves; their job is to make sure everyone’s having a great time! So if I see that Lauren in the corner is hanging back and not talking to anybody, it’s my job to take her by the hand and introduce her to people. It’s not about being locked in with the same clique you hang out with every Friday night. That kind of proactive approach of being a host gets lost. A party is about meeting new friends, catching up with old friends, and maybe falling in love.

How did you become Target’s go-to party whiz?
I’ve been BFF’s with Target for over a decade. I was very involved from the inception of their popup stores. I’ve worked on so many, including projects for Isaac Mizrahi, the Bull’s Eye Bodega, Missoni, Liberty of London, and recently the Phillip Lim collection. Target’s all about trying new things and taking educated risks.

What’s the best Target bash you’ve ever put together?
That’s like picking a favorite child! I have a very special fondness for a popup store I did in the Hamptons called “The Bulls Eye Inn”. We transformed an old inn, down to the wallpaper, creating these magical rooms. It was very vibrant and happy, and it was a pretty radical art installation, too.

Which Out-Of-Business Designer Do YOU Miss Most?