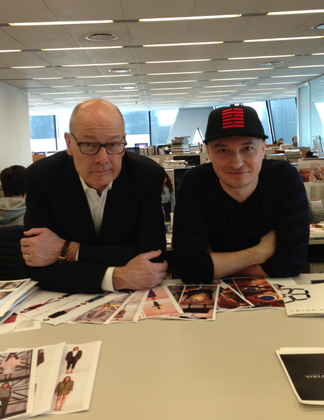 A brief but no less entertaining and illuminating check-in with Cosmo‘s Sergio Kletnoy, full of music recs you simply must download and much more…

Whoever came up with the five working days, two off-days ratio was an a****le! Since Monday was a holiday, I managed to squeeze five days of work into four days without skipping a beat. So you know it can be done! I spent my holiday weekend in the Hamptons (obvi!). I was even happy it rained most of the time; gave me a chance to rest with a few bottles of wine, four seasons of Arrested Development and two seasons of Veep. A perfect weekend indeed, so no complaints here! The rest of my week moved along like a well-oiled machine: I put THE BOSS through an intense schedule filled with enough meetings, lunches and dinners to wear out anyone with a weak heart and no energy (opposite of JoCo). I finally got a chance to shine bright like a diamond on the cover of a magazine (OK, OK, on the pullout) of the latest Cosmo with my fave bad-a** Kelly Osbourne, who I interviewed on the set and made a playlist for that quote “Would fit perfectly on any episode of RuPaul’s Drag Race”. Kelly and I ended up dancing and singing along for hours to her and my faves: Spice Girls, Madonna, Janet, Whitney, Ru, Britney, Cyndi and every other diva in the world. Oh and let me not forget the motherload… For the last nine months at Cosmo, JoCo was followed by NBC’s Rock Center for a major interview and profile with Harry Smith. It airs Friday at 10 p.m. on NBC. I may or may not be making an appearance… Wink, wink. I’ll be rocking my shades 24/7 starting Monday. Oh, and no autographs or pictures unless approved by my imaginary publicist…Toodles!

P.S. Just because I still like you, here are some major new tunes that you need in your life… Until next week, follow me on Twitter at @SergioKletnoy

“Take My Hand” by Charli XCX

“One Life” by Madcon & Kelly Rowland

“All The Days” by HAERTS

“Feel It All” by KT Tunstall

“Last Of Our Kinds” by Yuksek & Oh Land

“Hit Me” by Suede

Who's Your Daddy? Vol. 2: The Schnabel Twins

The Stars Come Out for Moschino’s L.A....