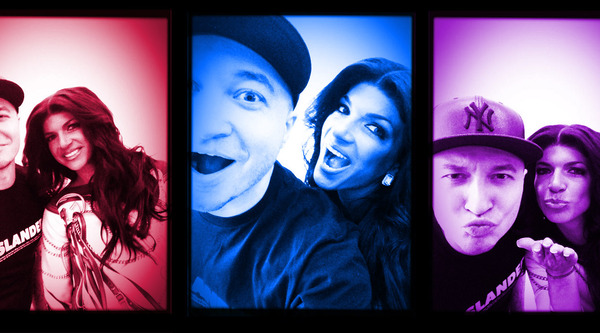 This week, Cosmo‘s Sergio Kletnoy, right-hand man with the mostest to EIC Joanna Coles, hangs with a Real Housewife, gets moved by a doc that harkens back to Kletnoy’s Russian childhood, and, of course, has a plethora of music recs to share…Enjoy!

Monday
When you bump into Teresa Giudice in your office, do you run far far away, or do you embrace her like an old friend? If you are Sergio, you run and hug her and secretly pray she flips a table or two in your honor. My obsession with The Real Housewives of New Jersey runs deep. Loving and caring family members? Check! Over the top fashions and hair? Check! Drama, catfights, screaming and fighting? Check, check, check and check! And now that the show is back on Bravo, I have a reason to luuuuuurve Sundays once again. So when I saw Teresa in a meeting with our beauty team deep in discussion about her new line of hair products, called Milania, I squeezed my ass in a chair next to them and listened to Giudice’s every word like they were coming from a prophet. Theresa was looking pretty chic, in black tights, knee-high leather boots, long-sleeve top with chains across the chest and hair more luxurious than Cher, Mariah Carey, and the entire Kardashian clan combined. She was perfectly tanned, super animated, fun, sweet, and gave us juice about the show that I’m just too selfish to reveal. All you need to know is that this season is going to be EPIC! I just wish I had luxurious hair just like Teresa’. It would give me a reason to wear her products on a daily and tell everyone about it! Later that evening, I caught KT Tunstall, whose song “Suddenly I See” from The Devil Wears Prada was everyone’s obsession a few years back. KT played an intimate set at the Living Room, the very same place she played her first ever NYC show. Tunstall’s amazing new album, Invisible Empire // Crescent Moon will be out in August. Until then, you must download her stunning new single “Feel It All”!

Tuesday
Woke up at 7 a.m. with a weird feeling in my eye. Upon closer inspection, I spotted a stye on my eye lid, fearing the worst I rushed over to see the Hearst nurse who told me it was stress related, poor nutrition, or sleep deprivation. Probably all of the above, so I’ll take “What is Sergio’s life for $500, Alex”. A few warm compresses later it was gone and I felt like my old-young self again. For the rest of the day I ate healthy, drank a few green juices, and did my best to stay under the radar. I was so looking forward to an evening on the couch with a healthy meal and no stress, when my phone rang. It was my friend and Bieber’s publicist Melissa, who forced me to come out to Jay-Z’s 40/40 club to meet one of Jay’s new artists, a singer-songwriter named Elijah Blake. Considering Blake’s work Usher and Rihanna, I had to oblige and traded in my relaxing eve for a night out on the town. The things I do for music…

Wednesday
After an intense work day filled with one too many meetings, scheduling conflicts, and conference calls I rushed off to Landmark Sunshine Cinema for the premiere of HBO’s documentary Pussy Riot: A Punk Prayer. For those of you living under a rock, Pussy Riot is a feminist art group from Russia, who last February spoke out against Russia’s corrupt government and performed a 40-second punk song inside Russia’s main cathedral. The performance led to an arrest and a two-year sentencing. But thanks to the power of social media, the face of Russian society and its rotten and shady ways has been changed forever. Having grown up in communist Russia, the doc moved me to tears, especially when I realized that not much has changed since my days as a youngster in the former U.S.S.R. No wonder my family left the land of not-so-free for a country filled with opportunity and freedom. These brave girls struck a chord with so many people across the globe and even had Madonna’s support through their unfare trial. The cherry on top was sitting a few feet away from rock-goddess, pioneer and rebel Patti Smith, who spoke before the screening. Whenever I see Patti, I always have the urge to break out into “People Have The Power”! Hopefully one of these days I will…

Thursday
Today THE BOSS was invited by Arianna Huffington to speak on a panel called “Redefining Success” with Candice Bergen and George Stephanopoulos. It’s a day-long event with some major power-players. Joanna’s portion was called “Managing A Frenetic Life,” which is pretty fitting. Although they should have asked me to attend, considering my job…

Friday
Obsessed: “We Can’t Stop” by Miley Cyrus; “Vocal” by Pet Shop Boys; “Counting Stars” by OneRepublic; ”Dark Star” by James Young; “Tennis Court” by Lorde; “Overdose” by Little Daylight; “X.O.X.” by Elijah Blake & Common; “Fiction” by The xx; “Platoon” by Jungle; “Cinderella” by Diana Vickers; “Cold” by Laura Welsh; “Human Man” by Johnny Stimson; “Wear Me Out” by Skylar Grey;  “The Way We Are” by Kate Boy. Enjoy the tunes, I’ll be back with more next week, until then follow me on Twitter at @SergioKletnoy!