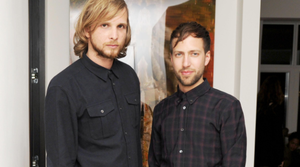 Who took home the bacon at the British Fashion Council and Vogue Designer Fashion Fund Awards this year? Designers Peter Pilotto and Christopher de Vos nabbed top honors, and thus are the newly-minted recipients of a $330,000 grant, plus mentoring over the next year to help them further grow their label. Known for their bright colors and eye-popping prints, the duo has created plenty of buzz since their label’s debut in 2007. Pilotto and de Vos met as students at Antwerp’s Royal Academy of Arts seven years before launching a line together. Pilotto is the latest designer to get the Target collab treatment; a bash during NYFW will toast Pilotto’s Target line becoming available to the masses. Past winners of the BFC/Vogue Designer Fashion Fund Award include Erdem, Jonathan Saunders, Christopher Kane, and Nicholas Kirkwood. The latter two designers were recently snatched up by Kering and LVMH, respectively. The Brits are definitely having their moment. Congrats, gents!