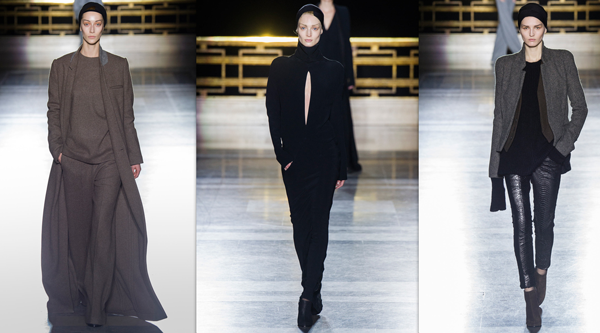 (NEW YORK) Haider Ackermann
It was all about the elongated form chez Haider Ackermann. In mostly greys, blacks, and taupes Ackermann sent out a collection of mostly floor-length ensembles. Overcoats swept the floor, there were long black slinky but somewhat casual column dresses that, save for a few plunging peepholes, were mostly covered up. Pants were cool and tough without overstating it. To wit: cropped snakeskin pants worn with a monotone mens’ wool blazer and layered with a sweeping overcoat, which, shown together, screamed “cool” without being overtly rock n’ roll inspired. If you’re on the petite side you may want to invest in a towering pair of heels to rock this wardrobe. But hey, that doesn’t sound so bad, now does it, darlings?

Vivienne Westwood
For Fall, Westwood turned out a collection inspired by trailblazing early 20th century couturier Charles Frederick Worth’s work, as unearthed at the Victoria and Albert costume archives. The effect? Victorian-inflected looks galore, interspersed with much more modern, loosely-silhouetted separates, pink and navy stripes, and saucy magpies done up in clashing prints and odd silhouette combos. As for the face paint, which was alternately clownish and Coachella-apropos, we’re guessing that didn’t come from the V&A museum archives. Ditto for the wacky wigs and feathered headpieces. But the audacious gowns that wrapped the show, including a fully spangled merlot number, some twisted takes on bridal via white tulle numbers, a voluminous rose-hued ruffled cape, and a few takes on goth-y black, the inaugural couturier’s aesthetic could be heard quietly.

Junya Watanabe
Often times, fashion imitates art, as Junya Watanabe explained for Fall. In a collection filled with black looks, each outfit required the audience to lean in closer to notice all of the fine details, textures, and fabrics. There were patchworks of fur, wool, sparkles, and leather, plus suit jackets with satin lapels and strips of sleek herringbone. Puffer jackets puffed out in a mess of petals while a pair of Lurex leggings were followed by a pair of showgirl-esque pants covered in sequins. All finished off with a pair of two-tone pointy leather brogues, expect to see these noir pieces on editrices from all corners of the globe.