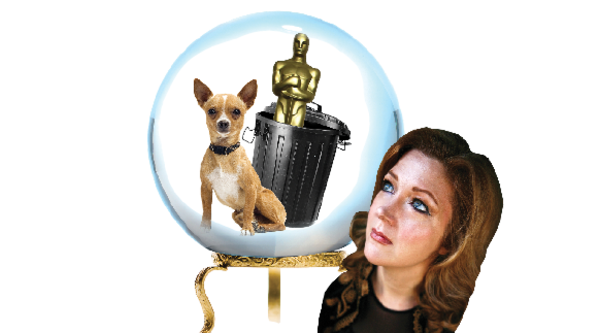 (LOS ANGELES) Stars turn to all types of spirituality to quell the anxiety of living under a microscope, from Scientology to Kabbalah. Ever heard of Peri Lyons? The New York-based psychic has a roster of big-name clients. Her awards show rituals, revealed…
BY PAIGE REDDINGER

How many clients do you have during awards season?
I can see four or five people a day, but before the Globes or Grammys I like to give people two and a half hours. I get pretty full two weeks in advance [of awards shows], but if it’s an emergency I’ll come to your house or stay up all night. I do things like theta healing.

What’s that?
A practitioner goes into a theta state when working with the client, and can very quickly pull beliefs and blockages and replace them with beliefs that help them. Right before awards stuff, people have a lot of self-worth issues. They sometimes feel like they’re impostors that don’t deserve it.

What other rituals do you do?
I tailored a ritual to one well-known stage actor: Before he goes on stage, he has a special garbage can. He’ll find out which parts of him might be trying to self-sabotage him unconsciously. He’ll physically pull that energy out of his body and put it in the trash.

Do your clients usually want you to be on call throughout awards season?
That’s part of our boutique service—I’ll be on call for 24 hours. It’s not cheap, but it’s very reassuring.

Have you ever had a client fly you somewhere because they needed your guidance?
Yes, it’s a blast! I’ve been flown out to movie sets. A few years ago I read for this comic actor who’d just married this gorgeous model. I was like, ‘Wow, you and your wife are going to have twin girls.’ And he was like, ‘What?’ And a year later, they did.

You used to be a personal shopper at Barneys. Do you ever consult on outfits?
My first couple of retail jobs I kept getting fired because I’d just know stuff. I’d start up a conversation with the customer and say, ‘You look like you just got off the plane from Costa Rica at 8 a.m.,’ and this woman said, ‘I did.’ She was holding a Chihuahua and I said, ‘He’s so cute! He looks like a Gemini. Is he?’ And she said, ‘Yes, and his name is Gemini.’ She was starting to look upset, and I said, ‘You must miss Cambridge. I mean, it’s only been a couple of months.’ She said, ‘I need to speak to your manager. I don’t know what’s going on here!’

You have a gift! When were you able to turn it into an advantage?
I started owning this talent as a personal shopper at Barneys; then, I worked at Louis Vuitton and Bergdorf’s. If I had appointments sometimes with actresses or performers, we’d go over what they wanted and I’d be like, ‘You’re going to need this.’ It would always turn out that they had a sudden audition for something that they needed that pants suit for.

Have you ever discouraged a client from wearing an outfit?
I kept seeing one client in this dress and she’s like, ‘I wouldn’t wear something like that.’ I told her I had this dream she was tan, holding an award, and  wearing this dress, and she was like, ‘As if!’ Two weeks before, her stylist showed up with a bunch of dresses and he said, ‘I don’t know why I pulled this for you, because it’s not you but…’ and he held up the dress I described. She was like, ‘Bingo! I’ll take it.’ She won the award.

Do you ever give impromptu readings?
Yes. Shia Labeouf was kind enough to let me read for him when I sat next to him at dinner. Carey Mulligan did the same thing.

How do you de-stress when you’re dealing with clients?
I grew up around celebrities. James Cagney was my godfather and my grandfather was a playwright and wrote movies. James Dean made his first screen appearance in one of my grandfather’s movies. Courtney Love has also been one of my closest friends. So I don’t get as freaked out about dealing with celebrities. But there are famous people I don’t get along with—if I really don’t like you, I won’t read for you. That’s happened twice.

An Astrologer and a Psychic Weigh in...