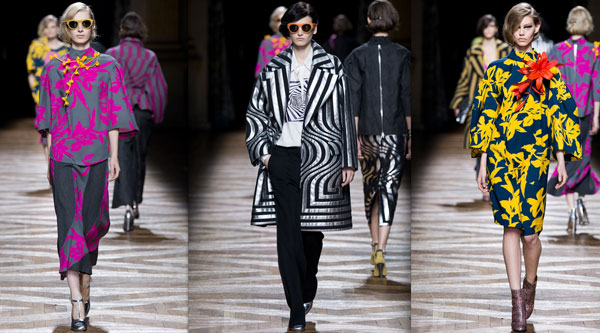 (NEW YORK) Dries Van Noten
It was a psychedelic trip to the tropics with a bit of disco thrown in. Is your head spinning yet? It should be. Only a mixmaster like Dries van Noten could pull off a combination of those three themes and turn it into one of the best collections of the season so far. There were kaleidoscopic spiral prints like a bold silver and black overcoat with swirly lines or yellow pinwheel prints on navy skirts and dresses. Yellow and fuchsia Hawaiian lily prints came on pieces like a navy shift dress with bell sleeves that was decorated with cascading orange lilies pinned to one shoulder or on a tunic top with a triple pinwheel print down the center worn over a ruffled grey skirt with a fuschia lily print. Evening looks had touches of silver lame, like a menswear-inspired black suit worn with a ruffled high-collar white shirt and a shiny silver crop top. A sparkly blouse was worn with a tangerine knee-length skirt with a silver lily print, and a fully silver lamé sleeveless drop waist dress pinned with more of those bright orange lilies made for a stunning and unusual contrast. The explosion of colors and prints amounted to a wild mix that left us delightfully dizzy.

Christophe Lemaire
In between designing luxe wares at Hermès, Christophe Lemaire has been perfecting the art of creating a chic wardrobe for the girl who doesn’t want to look like she’s trying too hard. Fresh-faced mods wore simple knit dresses, while others wore complicated layers of skirts paired with an ample amount of sweaters. Sweaters were so prevalent they were even wrapped around the neck in a scarf-like manner. There is a touch of the Hermès mark present, thanks to neat, waist-cinching belts to the artfully constructed jackets. But jackets with large lapels and voluminous sleeves wouldn’t fare well at the iconic maison. At Lemaire’s show however, in visions of denim and cotton, these coats were perfect, especially when followed by simple suit jackets sans collars and ankle-skimming wide-legged pants. In the shoe department, boots abounded: there were camel suede mid-length versions, short shiny leather ones, and ankle-high styles paired with ribbed stockings. With the whole show in simple tones of blue, cream, and camel, the appearance of even one print felt surprising. We’ll take all the simplicity we can get.

Guy Laroche
Refreshing much? Guy Laroche’s latest mixed up unexpected fabrics and clean-cut silhouettes. First up? A shiny patent leather jacket that straddled the line between weather-apropos and simple glamour. The same coat in a brown calfhair had the exact same result. That was the notion of the entire show; presenting one knockout look and following it with a similar style, save for a few tweaks. It was a concept that translated well with pleats, monochromatic suit and top combos, and Mongolian lamb’s wool jackets. The best use of this theory had to be a sheer tulle dotted with sequin spots used as peek-a-boo accents on a skirt, or standing out on its own, with only teeny black shorts offering coverage. Scanty, sure, and great editorial fodder.