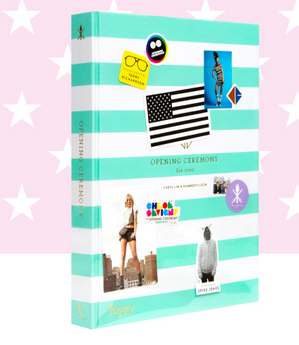 Where will all the cool kids be on Saturday? Angelenos will be rushing over to Opening Ceremony on 451 North La Cienega Boulevard for Carol Lim and Humberto Leon bash for their new Rizzoli-published book, simply called Opening Ceremony, which looks back at 10 years of ground-breaking success as retailers and influencers. Collaborater and friend Jason Schwartzman will also be on hand to help the duo launch the book, which features photographs by Terry Richardson, natch. Other OC regulars to be found inside? Chloë Sevigny and Spike Jonze have created their own ‘zine inserts, plus scribes like Eric Wilson and Sally Singer lent their voices to the tome. Other luminaries like Terence Koh, Alexander Wang, Marcel Dzama, Laura and Kate Mulleavy, Jack McCollough and Lazaro Hernandez and Ryan McGinley are make cameos in the OC book version.The downtown retail dons will be there from 3 to 5 p.m. tomorrow signing copies. We doubt we need to tell you, but get there early! There’s this small little obstacle in L.A. called parking.