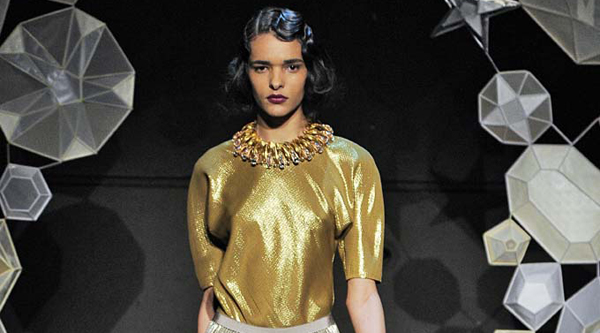 (NEW YORK) Tia Cibani
Yesterday, FGI Rising Star winner Tia Cibani debuted her second collection for her eponymous line post-Ports 1961. Cibani gave us a sneak peek at the thirties-inflected ethos last month (think Man Ray, Peggy Guggenheim and geometrics). The Baryshnikov Arts Center setting featured a paper installation by artist Kristen Hassenfeld, amounting to varied paper geomerty, including hexagonal star-esque shapes strung on frames. “I wanted something that felt precious and fragile,” Cibani told The Daily. On the frock front, a silver and gold metallic pleated “sunray” dress involved asymmetrical, tiered pleats and  “brass honeycomb” paired with a calf-length pleated gold and silver silk lamé shirt. Cibani took her expertise in draping and pleating further via a champagne chainmail paillette kimono vest, knees-length, with a split and draped back. A bright fuschia georgette-chiffon long-sleeved dress was another standout, though it was apparently a cause for plenty of stress pre-show. “It was the last dress and it arrived at 12:30 p.m., right before our 2 p.m. showing,” Cibani recounted. “The pleat was so long, we had to cut, trim, and basically give it surgery.” Stressful much? Luckily, it all went off with out a hitch.

Suzanne Rae
Inside the Midtown environs of the Philippine Consulate, Suzanne Rae gathered the sartorial set for her strongest collection to date, packed with tapered skirts twinned with elongated vests, plus wide-leg trousers with paper thin blouses. Minimalistic in nature, Rae drew her references from images of beacons in the service industry. Par exemple: a long, ceremonial robe of a clergyman was translated into a sophisticated black and white panel dress. Meanwhile, nuns’ habits turned into a knit circle scarf, worn as a hood, with a knit turban from Rae’s collaboration with Lindsay Degen of Degen. “I was looking to do a collab because I’d never done knits, and I knew I wanted to work with another emerging designer,” said Rae on the partnership. “We worked well together and managed to make something happen that I’m in love with.”

Tanya Taylor
Tanya Taylor returned to the MoMA to present her third collection, and the Toronto-born designer didn’t disappoint. Sales floor staples—cashmere knits, tailored wool trousers, and streamlined wool overcoats—were all present in a strong Fall collection as were stand outs like suiting in grey gridlock or burgundy check. Take note: this is one designer to watch.

Veronica Beard
Sisters-in-law Veronica Swanson Beard and Veronica Miele Beard fought for the right to show a patriotic, all-American collection this season, very much in line with their easy, wearable sportswear looks of presentations past. What better venue than Bill’s, a former ninties hotspot (of which Ken Downing vividly remembers the “glory days”) that was recently renovated and filled to the brim with antique hunting paraphernalia, sepia photos, and enough taxidermied animals to fill a museum, evoking a gentleman’s drinking cave soaked in a hundred years of history. Veronica Beard’s rugged fall looks felt apropos:   Models donned a western-inflected uniform for the modern woman, rendered in printed silk skirts, plaid blazers, lush fox fur vests, and leather-accented jackets. One particularly pouty mod nailed it in grey wool blazer and trou, with a Davey Crocket-esque raccoon tail hat thrown on top of her messy fishtail braid. Known for their signature blazer-and-dickey creations, the girls are developing strengths in the outerwear and evening wear departments, exhibited via a gleaming long-sleeved gold gown. Though the Beard sisters find their roots in the east coast, their manifest destiny seems to be a inspiration culled from another coast (and time period). As summarized on the run of show by poet Henry David Thoreau: “Eastward I go only by force; but westward I go free.”

Rachel Comey
A collection of layered, tailored separates comprising Rachel Comey’s latest was shown on a cast of models who all sported the same shaggy, sexy pixie hair cut — a look which was achieved convincingly with wigs. But if you aren’t willing to make the chop this fall, you might still want to slip into some of Comey’s sexy, men’s wear-inspired pants, or one of her ’70s-style full-skirted dresses. The inspiration this season, said the designer, was a woman “who’s very determined. She’s on some kind of mission.” And the clothes look tough but feminine at the same time. It’s not surprising that Comey has earned fans like Debbie Harry — who sat front row — and Sarah Sophie Flicker, who calls the designer’s work “sexy and beautiful and totally wearable.” Agreed!

Marni Makes Scents Of It All