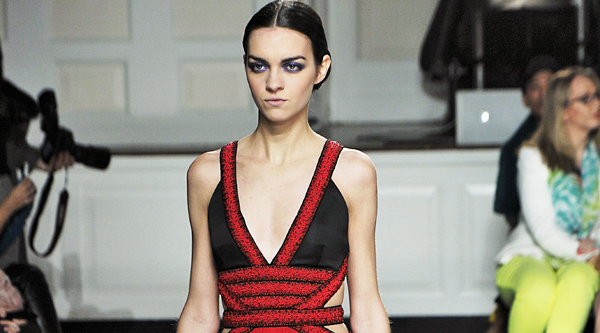 (NEW YORK) Jason Wu
Think a gust of chilly temps and freezing sleet will keep the sartorial set at bay? Not a chance. Fashion’s upper echelon braved the climes (in five inch, heels no less) to pack into Jason Wu’s Park Ave. show on Friday afternoon. “The first thing I thought when I woke up was, Is there a snow day?’ But nothing was canceled. That’s so New York; so New York Fashion Week,” said Girls starlet Allison Williams, perched front row, as was Stephanie Seymour, with her Brant boys in tow. And if it was a show they came for, a show they got. Wu sent out a legion of mods in elegant day frocks, nighttime dress-coats, and pleated skirts in a color palette anchored in black, grey, red, and bone. Of particular note: a pair of wool stovepipe pants balanced with a belted peplum top that’s quickly becoming a key trend for Fall ’13.

Chadwick Bell
Sixties docu Monterey Pop was the starting point for designer Chadwick Bell this season, who peppered his Fall runway with a slew of easy-to-wear separates, jacquard suiting, and knee-length dresses. But it was a batch of covetable coats and laboriously tailored trousers that stole the show. In particular, a camel-colored cashmere coat, spliced with a shot of green at the cuffs. Ditto for that lovely belted persimmon vest coat.

Suno
Max Osterweis and Erin Beatty kicked it up a notch this season, steering their usually print-heavy assortment into a different direction—one that involves heavier doses of black than seasons past. The opener set the tone overall with a black ruffle sleeveless dress, edged in a “Russian” paisley border. That was followed up with an assortment of pinstripe pants, printed tunics, and floral frocks. Again, coming back to black with a hit finale number: a dark neoprene flare dress sprinkled with Swarovski crystals.

Cushnie et Ochs
If anyone knows a thing or two about sexy dressing, it’s Michelle Ochs and Carly Cushnie. The duo incorporated their usual titillating trove of cutout dresses and body-hugging skirts this season—this time with a bondage-esque slant. Cue the harness-like straps on bodices, not to mention an abundance of leather from “shield” vests to corseted crop tops—all tied up in a cohesive collection that’s bound to do well on the sales floor  this time next year.

Things To Discuss: From Marc to Macaroons!