Nile Rodgers Proves That Age Is Just A Number 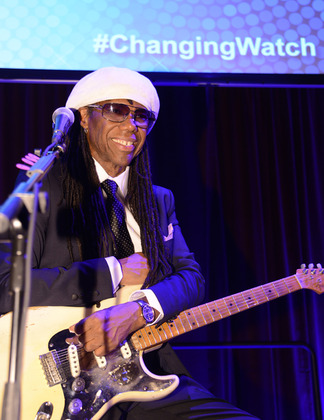 At the Changing Watch benefit for the We Are Family foundation on Wednesday, Nile Rodgers surprised the packed room at Cipriani’s when he admitted that he turned 61 this year. You might be familiar with a little song called Get Lucky he helped Daft Punk produce (you know, the one that was a top hit in 97 countries). But that’s just one of the many (many, many, many!) golden hits he’s produced. He regaled the crowd with stories, like the time he helped out Diana Ross with I’m Coming Out (after taking a trip to a gay bar, nonetheless) and how Grace Jones invited him and his band Chic to Studio 54 on New Years Eve of 1978 (and no, they couldn’t get in). The best part of the night? Rodgers was given a Girard-Perregaux watch for all his world changing efforts. Now that’s chic!

Look Who MADE Coco!

Space For Giants Hosts Its First US...