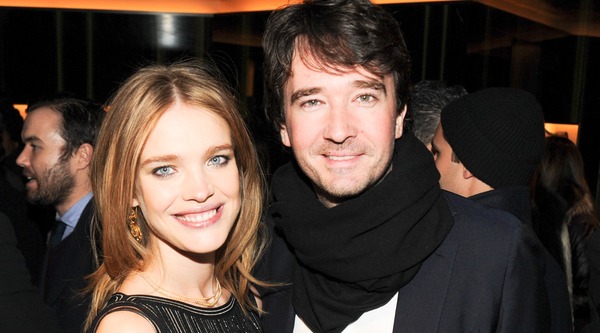 Fame, fortune, and adoration…what more could a girl ask for? When these cover girls fell for their leading men, they hit the jackpot (in more ways than one!) Behold, the lushest couples this side of a billion!

Natalia Vodianova & Antoine Arnault
He’s the heir to dad Bernard’s $29 billion fashion fortune, the CEO of Berluti, the chairman of Loro Piana, and a Gemini; she’s a late-’90s super still beloved for her baby face, and a Pisces.
RAGS TO RICHES: Vodianova went from helping her mother sell fruit on the streets of the Soviet Union to being listed on Forbes’ top-earning models list in 2012. She didn’t make the cut this year, but appears to be doing fine, non?
SOMETHING IN THE HEIR: Vodianova has three kids with her ex-hubby, Justin Portman, a British property heir, artist, and “chess organizer.” In November, she and Antoine confirmed she’s expecting a fourth.

Karlie Kloss & Josh Kushner
He’s the son of billionaire New Jersey real estate developer Charles Kushner, a founder at Thrive Capital, and a Gemini; she’s one of the most charismatic supermodels of her generation, and a Leo.
RICHES TO RICHES: A savy tech investor, Josh has made millions of his own investing early in startups like Instagram.
HOT HEADS: Like his Observer-owning big brother, Jared Kushner, who’s married to Ivanka Trump, Josh prefers his beauty with a side of brains. Last summer, 21-year-old Kloss told us she hopes to attend Harvard, his alma mater.
EQUAL FOOTING: Kushner is one of the few eligible men in New York who can look his 6’1” girlfriend in the eye. He’s also kinda hot, no?

Elle Macpherson & Jeff Soffer
He’s a well-connected Miami real estate mogul, who’s cagey about revealing his birthday; she’s a former Sports Illustrated model, the current CMO and Creative Director of Elle Macpherson Intimates, and an Aries.
EMOTIONAL RESCUE: After three years together, they broke up in March of 2012, but were back together by November, after Soffer was involved in a deadly helicopter crash.
JUST MARRIED: They made it legit in July, 2013, in Fiji.
BILLIONAIRE BAIT: This isn’t the first one Elle “The Body” Macpherson’s bagged. She has two children from her previous relationship to French financier Arpad “Archie” Busson. Busson now dates Uma Thurman.
CELEB SCANDAL: Gwyneth Paltrow angrily denied tabloid reports that she got cozy with Soffer when he invited her and Kate Hudson to party on his yacht.

Stephanie Seymour & Peter Brant
He’s a Canadian paper mogul worth an estimated $500 million, the chairman of Brant Publications, and a stickler about revealing his birthday; she’s an early-’90s supe, a mom of four, and a Cancer.
RELATIOSHIP STATUS: Love is back in bloom!
SCANDAL FACTOR: Seymour and Brant were embroiled in a bitter divorce for six months that included drug and alcohol tests for Seymour. Brant also accused her of “stealing” $700,000 worth of items from their Florida mansion.
PEACE OFFERING: The two reconciled after Seymour returned a sentimental Navajo blanket.
AGAINST TYPE: Seymour was previously engaged to Guns ’n Roses frontman Axl Rose; Brant’s former wife is Sandy Brant, Ingrid Sischy’s longtime companion.