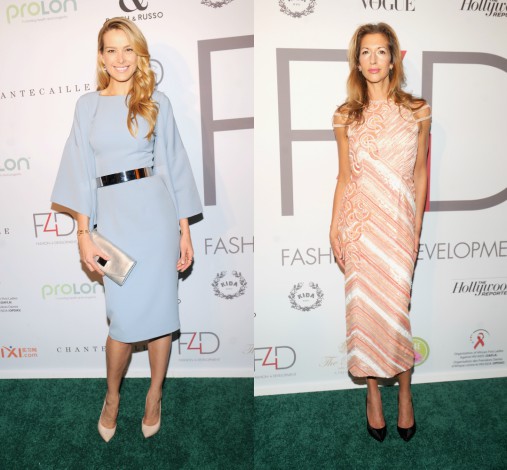 What do model Petra Nemcova and Orange is the New Black actress Alysia Reiner have in common? They both attended yesterday’s Fashion 4 Development First Ladies Luncheon, where we caught up with them about their latest

Naomi Campbell received this award last year. Have you ever been honored in the same capacity before?
I’m not 100 percent sure, but it’s very possible! The award is not for me—I’m picking it up on behalf of everyone who has been part of Happy Heart’s journey since the beginning…the team members, donors, teachers, everyone! It gives us a platform to talk about not only our work, but what needs to be done—to act much faster on natural disasters. Children are waiting six years to have a safe school to go to, and that’s all of primary school, so a whole generation is being lost. We need a smart response, not just a first response, and today is a platform to shine a light on what we need to do.

What else are you working on these days?
We just launched a campaign with Tumi on Monday for their new Mariella collection of beautiful handbags for women. Tumi supported the Happy Hearts Fund and had a great promotion from Thursday to Sunday where people could donate $20 and get 25 percent off any purchase to raise funds. We’re waiting for the final results, but we’ll be able to build at least one or two schools through this promotion, which is amazing. They came to Mexico to film a video at our school—you could see firsthand the differences we’re making with Happy Hearts and what difference they can make through their partnership.

Anything more coming up!
Yeah! There’s a surprise this Valentine’s Day with another amazing Italian luxury brand. I feel very lucky to work with amazing brands, creative directors, and founders to create a brighter future for children.

Any plans to head overseas for Fashion Week?
I usually go to New York Fashion Week and then to Paris or London. I only went to one show here because I had to fly to Europe for work. I’m probably going to go to Paris for a little, but it’s not definite yet. We’ll see!

Who are you wearing?
Bibhu Mohapatra. Did you go to his show?

Yes! We saw you at quite a few…
I was there too. I loved that peacock look. It was just so breathtaking.

It was. Has fashion always been an interest of yours?
It’s interesting…I’ve always loved fashion as wearable art, but this cause is particularly special because it’s about fashion as change. I talk a lot about using your buying power as a change-maker and this is a perfect example, particularly to help change the world for women.

You’ve spoken at the UN before.
I have! I’ve been to the UN and I’ve been asked to speak there a couple of times. It’s fun. God-willing, we really change things.

What’s new on the acting front?
I’m on a new FX TV show called Better Things. We just got our second season today. I’m also still on Orange is the New Black and I also made a movie this summer. It’s called Equity, and it’s the first ever female-driven Wall Street movie—we’re now pitching the TV series. The rights were sold and now we’re working to move forward.

You’ve played so many different roles. Is there a character you’ve always wanted to try?
I would love to play someone more vulnerable as an actress. I’m always casted as a very strong woman, but it would be so fun to see a different side of me.