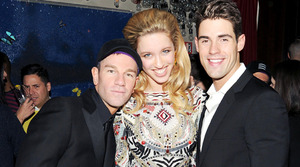 So, what’s all this Gents business about, exactly? The brand officially launched with an upscale and custom baseball hat, and is now offfering v and crew neck t-shirts, long sleeve v-neck t-shirts, and beanies. “For three months in business, we’ve surpassed every expectation that we ever had,” Reed told us. “The site is doing so well that we’ve decided to go into retail stores, which was never the plan. Plus, 40 percent of my customers are women!” Case in point: Zoe Saldana is a fan, and her recent appearance online wearing one of his hats exploded sales. So, was the former Calvin Klein flak enjoying his moment in the limelight? “It’s extremely strange. I’m used to being on the other side of this. To have the entire Calvin team come out on the eve of their show to support me is huge. Malcolm [Carfrae] has been my mentor. I owe this to him!” Now, that’s a gent.
EDDIE ROCHE