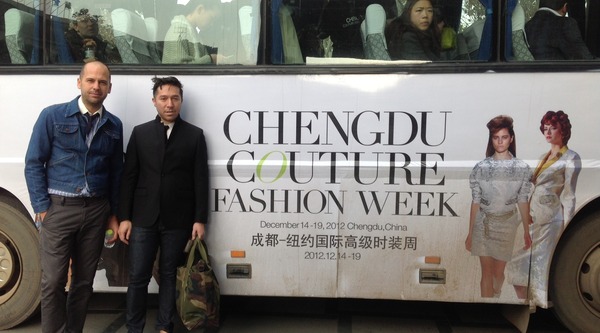 Those always on the go Ruffian’s Brian Wolk and Claude Morais latest adventure is a trip to China. They’ve written in about their epic journey to Chengdu Fashion Week in their latest installment of La Vie En Ruffian.

“It has always been a fantasy of ours to be able to travel to the East to show our work. And by East we mean Asia, not the Hamptons. China has always been a country of inspiration for us as designers so when we received a phone call from New Look Fashion Management to bring our Spring 2013 collection to Chengdu Fashion Week, it was a dream come true. Chengdu is one of the largest growing cities in China, famous for its rich history in textiles. If you were to compare Chengdu to a city in Italy, it would be the design and fashion capital, Milan. After working out all the logistics and scheduling, we began to make our preparations to travel including a visit to the Chinese Consulate for our visas.

The big day finally arrived; the collection, jewelry, accessories and 40 pairs of Converse were all packed. We headed to JFK for our 16-hour journey to Chengdu. We have always said that a country’s airline is a glimpse into its culture and Air China did not disappoint. Its extensive Eastern and Western menu, along with a vast wine selection, made the flight go by in no time. After a quick change-over at Beijing, it was suddenly midnight in China and we were checked into our hotel, The Rhombus Fantasia of Chengdu. As we settled into our suite, we glanced at our schedule for the next day. Beginning at 8 a.m., it would start with a walk-through of the show space followed by a staff meeting, a press conference, and fittings in the afternoon. No rest for the weary, we hit the sack in our Lucy and Ricky Ricardo Twin beds (see photo in gallery).

The next morning, we headed down to the breakfast room where we were greeted by the friendly hotel staff and the familiar sounds of American Christmas carols. A mélange of Eastern and Western food smells also greeted our noses. While our Chengdu interns unpacked the collection, we headed off to see the show space and to meet our models. The entire day went along flawlessly and on-schedule. Before we had time for a breath, we were given the next days’ schedule, which included exciting meetings with retailers and manufacturers.

In a large room filled with photographers, we were introduced to the press, government officials and Chinese industry leaders. Photos were taken, handshakes were exchanged, and Jie Gao, president of New Look Fashion Management, introduced us to the who’s who of the group. After many exciting meetings, we were invited to visit a premiere luxury apparel factory just outside the city of Guangzhou, China’s third-largest city. We, of course, accepted and were swiftly back on Air China the next day flying two hours south to China’s most important manufacturing region on the Pearl River Delta. It was all a bit of a dream. Our hosts were kind and generous, giving us a tour of their incredible workshops. Lunch followed, which would prove to be our most memorable meal in China. In a private dining room filled with Chinese antiquities, we heard the glissando of the grand piano as we laid out plans for our future in China. It was only 48 hours into our trip and it felt as though we were in a bio-epic about Ruffian. After lunch and many cups of Jasmine tea, we headed to the airport and two hours later, as the clock struck midnight, arrived back at The Rhombus Fantasia, our home in Chengdu.

On Sunday, still a bit jet lagged, we woke up and decided to hit the streets on our only day off. We headed to the famed boutiques and luxury malls in the shopping district of Chengdu. It’s important to know that luxury is a lifestyle in Chengdu and shopping is practically a religion. It had been a long time since we had seen such passion for consuming on all socio-economic levels. From the 12-story wholesale discount center to luxury staples such as Prada and Louis Vuitton, the Chengdu-ese are experienced shoppers and the city’s extraordinary double-digit economic growth is evident on every corner. As the sun set, we made our way back to the hotel where the concierge arranged tickets for the Shu Feng Ya Yun Sichuan Opera. Sichuan Opera is a nationally celebrated art form and its fabulous costumes, face changing acts of illusion, and death-defying acrobatics make for an edge-of-your-seat performance. We are so grateful we were able to squeeze this amazing show into our schedule; it really gave us a great glance into the rich history of Chinese Theatre. After the Opera, we stopped by a 7-11, picked up a couple of Jack and Cokes (pre-made in a bottle, why don’t they import these to the U.S.?) and headed back to the hotel for a good night’s rest before our big show.

The following morning, after a few final fittings, we headed to the show space where the models where already getting into hair and make-up. We were told that people were driving as far as two hours to come to our show. The backstage crew techs were warm and excited as the space filled to capacity. As the show began, we really felt the love of our new Chinese partners and audience members. Their love of fashion is genuine and originality is truly prized, respected, and revered. This was made especially clear following the show, as the audience members patiently waited one-by-one in line and individually thanked us for coming. That evening, our crew of interns all came back to our suite as we packed the collection and enjoyed a meal of room service pizza. We were most honored to be invited by China to present our collection and look forward to our next adventure East in the Spring!”

Chic Game: Who Shot This Cover of BeyoncÃ© on GQ?