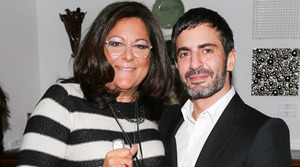 (NEW YORK) Fern Mallis corralled a chic set to the 92nd Street Y last night for the latest edition of her “Fashion Icons” conversations, this time with Marc Jacobs who she’s been trying to nab for a year and a half, plus had to reschedule post-Sandy in November. It was worth the wait as Jacobs descended upon the stage to talk everything from former flames to Dior to Nebbles, his new pup! Next up in the series? Betsey Johnson on Jan. 16, Vera Wang on Feb. 19, and Suzy Menkes on May 7. But first: highlights from MJ!
BY MARIA DENARDO

On crafting: “Needlepoint came in handy when I tried to stop smoking. I made a couple cushions—one for my partner, Robert Duffy. He got my first needlepoint cushion. It was called Pansy, the cow.”

On family: “I have a brother and a sister. They’re younger. I lost touch with them years ago. We had issues and problems. We just didn’t get along.”

On Studio 54: “I’d take my books to Studio 54 on Thursday nights, so I could make my Friday morning classes. It taught me a lot of things, like how to behave in a decadent fashion. It gave me an unhealthy curiosity about substances and anonymous sex. I wasn’t the only one having anonymous sex, by the way. I think one of your previous speakers was there at the same time.”

On Paris: “I had to take a loan out to go. I had this idea in my mind that I had to go there before I reached a certain age, so I signed up for a four-week class. I’m envious of anyone who goes to Paris for the first time. I cried on the plane on the way back home; I was so happy in Paris.”

On tattoos: “I never saw tattoos as a dark thing. [I have] 33. Scott Campbell has done most of the tattoos. He’s a great artist and a sweetheart. [My favorite tattoo] is a Jean Michel Frank couch, which is tattooed right here [points to the lower left side of his stomach]. Why a couch? There’s no reason; that’s exactly the reason…I was talking with my trainer today. There’s this character on South Park called ManBearPig. We’re fighting over which one of us is going to get that tattoo next.”

On his life philosophy: “I’m a perfect being in a perfect world where everything benefits me completely. It’s something I learned in rehab. It’s a nice way to say things might not go the way I want them—I may not be happy with things—but everything is the way it’s supposed to be. As much as I’d like to be, I’m not the Dalai Lama. I’m not the most enlightened, spiritual human being. When Sandy happened, believe me, I didn’t think it was perfect.”

On business partner, Robert Duffy: “Robert is the longest relationship I’ve had with any human being, and we’re not lovers nor have we ever been. We’ve never even kissed on the lips—not on purpose, anyway.”

On designing for Perry Ellis: “I was 25 years old. I remember the first day I showed up on my motocycle. They said, ‘The deliveries are around back.’ I said, ‘No, I’m the designer here.'”

On what keeps his attention and what doesn’t: “You can show me 50,000 swatches of duchess satin and you have an attentive audience. But a lawyer starts talking and I fall asleep. Or accountants. I’m not really good at staying within a budget.”

On the reaction after joining Louis Vuitton: “Well, the French don’t really like anything. I’m being sarcastic. Not really. A lot of people in the company were threatened. There was a lot of French backstabbing. I don’t know if I won them all over, but I definitely won because none of them are still there. I’m not a bitch, but things happen.”

On logos: “When I was a kid, I wanted an IZOD Lacoste shirt because I wanted the alligator. I didn’t want a pig. I understand. Vuitton represents a quality and a craftsmanship. That’s what people see, and so you belong to that clique.”

On Victoria Beckham: “She was on the cover of an English newspaper with a counterfeit [graffiti LV] bag. That’s how I met her. I sent her a real one.”

On substance addiction: “Robert and I went to Mr. [Bernard] Arnault. We explained to him what was going on and that I needed help. When Robert would leave me in Paris, he’d say, ‘These people don’t really care about you. They don’t love you. They want you to work and perform.’ I went away for a month, more than once. I needed help and admitted it. That was the first step.”

On life after rehab: “I wouldn’t say I’m 100 percent sober. I’m not perfect. Yeah, I’ve had a glass of wine, and maybe a couple of whiskeys. Maybe I’ve smoked a joint, or other things. But I’m mostly sober.”

On his legendary costume parties: “Each year, I wanted to make it more complicated to the point where the last one—where I dressed up like a camel toe—had to be assembled in the Rainbow Room because it wouldn’t fit through the revolving doors. It was great because there was a stool inside the costume, so I could just sit there while everyone took pictures with me. I didn’t get to dance but…[Fern Mallis: Well, I don’t think camel toes dance a lot.]

On his workout regime: “I work out five or six days a week for two hours in the morning, usually at 9 a.m. There’s a lot of really nice looking people there! I was always insecure with how I looked—I still am but not as much as before. Earlier I took a shower before coming here, and I took a picture of myself in front of the mirror for my boyfriend. Obviously, I wouldn’t have done that if I didn’t feel good about how I look right now.”

On former squeeze, Lorenzo Martone: “He asked me to marry him, then he broke up with me. I still wear the ring. Everyone thinks I’m the bad guy, or that I broke up with him. He just changed his mind. But we’re best friends.”

On those Dior talks: “It was a big discussion, and very flattering. It was a difficult time. I’ve never dreamed of being a couturier, and I think it would be a difficult place to work. I wanted to stay with my team. I insisted and held my ground. It was actually my psychiatrist, Dr. Richardson, who asked how Dior would improve my quality of life. It wouldn’t. I thought, ‘When am I going to enjoy life?’ Luckily, the decision didn’t have to be made. Mr. Arnault also realized Robert and I were right for where we were and we still had a lot to do at Louis Vuitton. While it was flattering, it was months of psychodrama.”