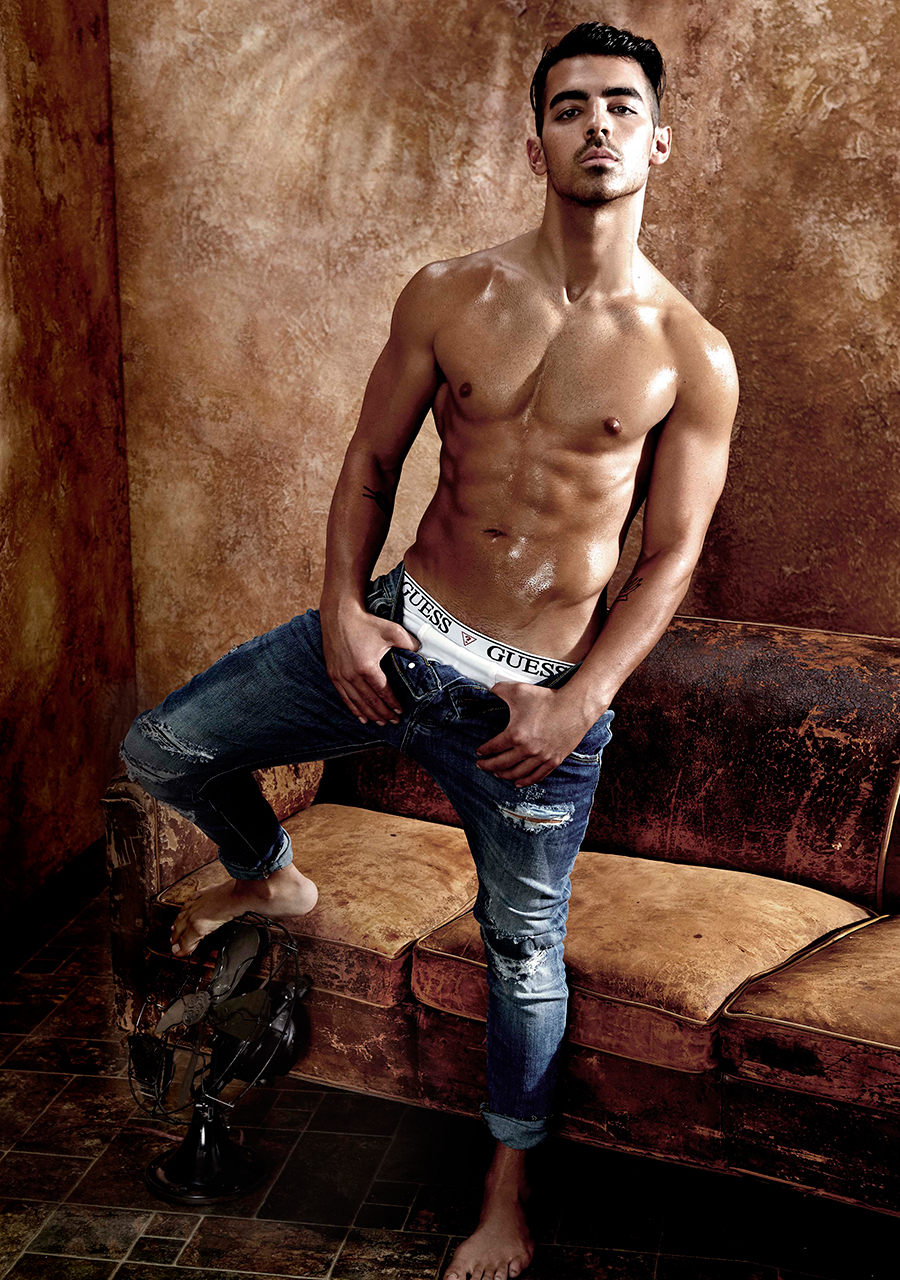 Joe Jonas’ shirtless underwear campaign for GUESS has become a viral sensation—and understandably so (just look at those abs!) We caught up with the DNCE frontman at his personal appearance for GUESS at Macy’s yesterday and grilled him on his underwear habits and more… 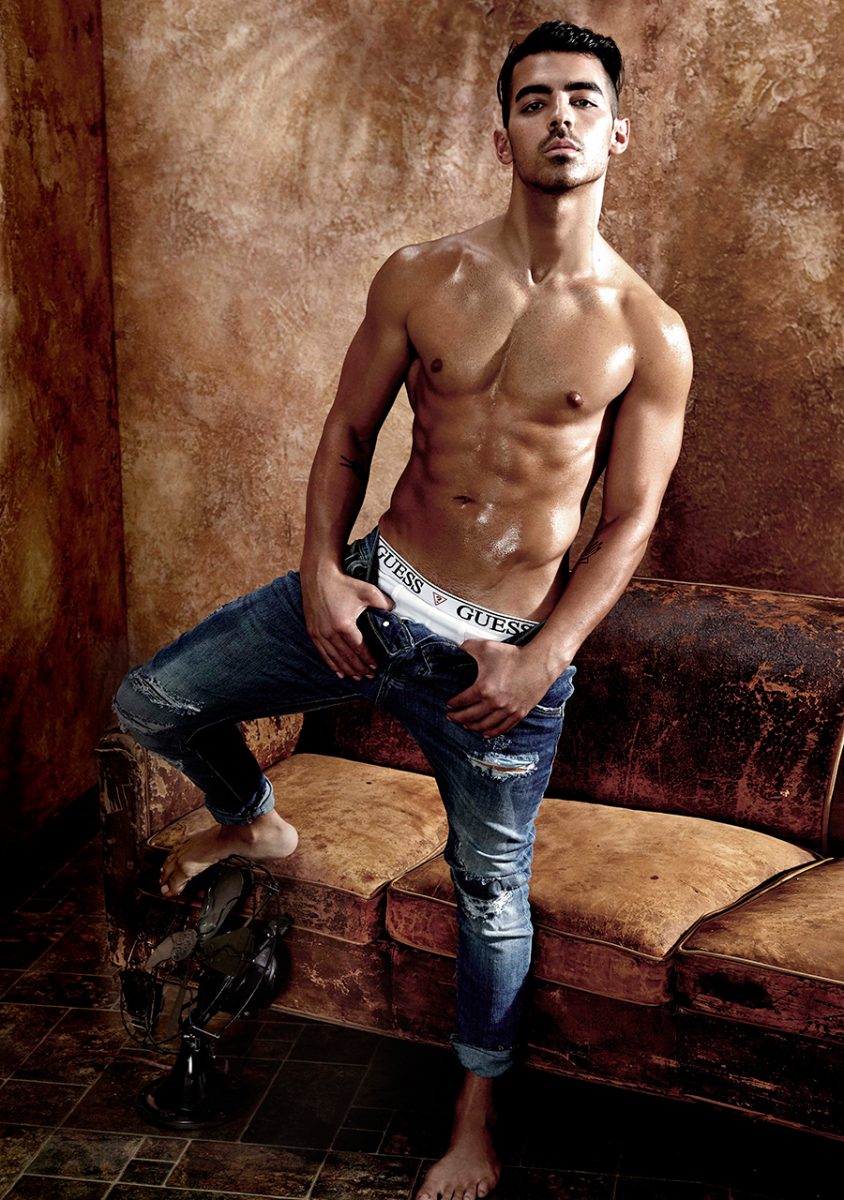 Your bomber jacket is super chic!
Guess….who it’s by! [Laughs]. My friends are going to be very proud of me. They were like, ‘Are you going to say that when you’re wearing GUESS tomorrow?’ And I was like, Just wait.

You look like such a pro in your new GUESS campaign. Did you practice modeling growing up?
I did a few Zoolander moments here and there, but I never really practiced. When I was younger, all I wanted to do was play sports and be a comedian, so to have something like this 27 years into my life is a pretty cool experience. 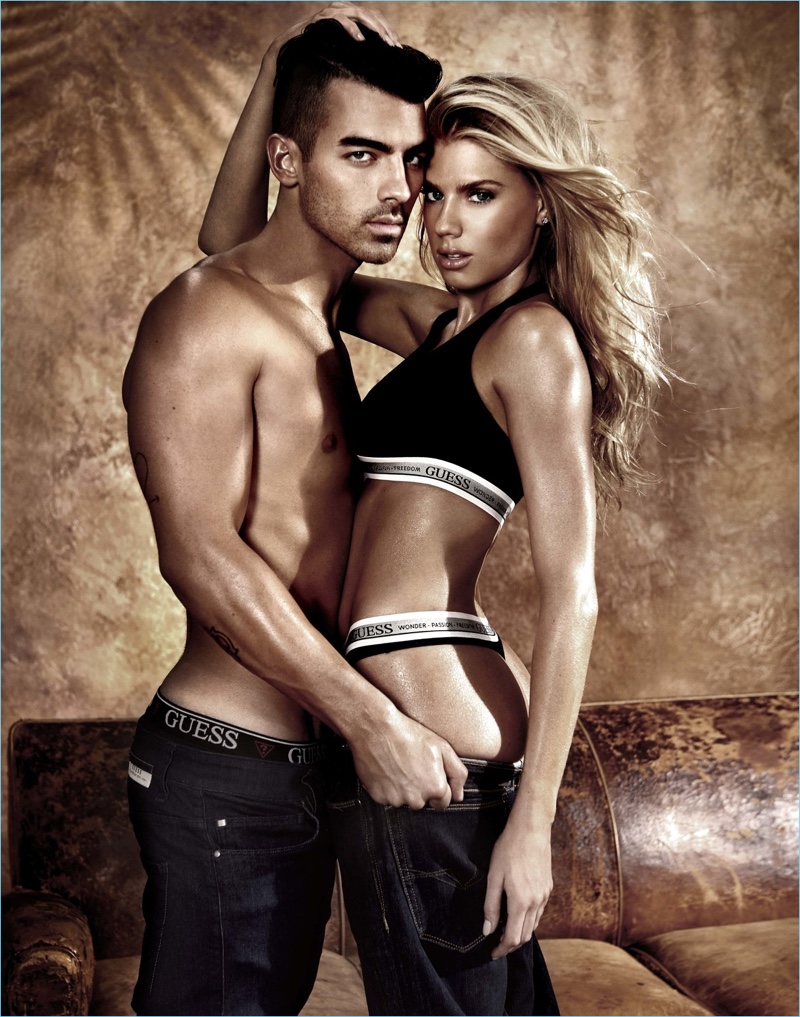 Did it take a lot of convincing to get you to model in your underwear?
It kind of did, yeah. It took about 24 to 48 hours of talking with my team. Although I wasn’t in bad shape, you have to take it to another level and put down that second donut every once and a while. But I’m glad, because it was life-changing for me. I know now I can go on tour [with my band DNC] and stay in shape. I learned to find a balance.

How did your diet change?
I didn’t starve myself—I actually ate a lot, because I worked out a lot, so my body needed protein. My trainer really helped look over my diet, especially when we were touring in countries that didn’t speak English. I’d look at the menu and didn’t know what I could have. There were also times where I would eat cheeseburgers and fries, so it wasn’t crazy—it was just about making smart choices and hitting the gym a little harder the next day. 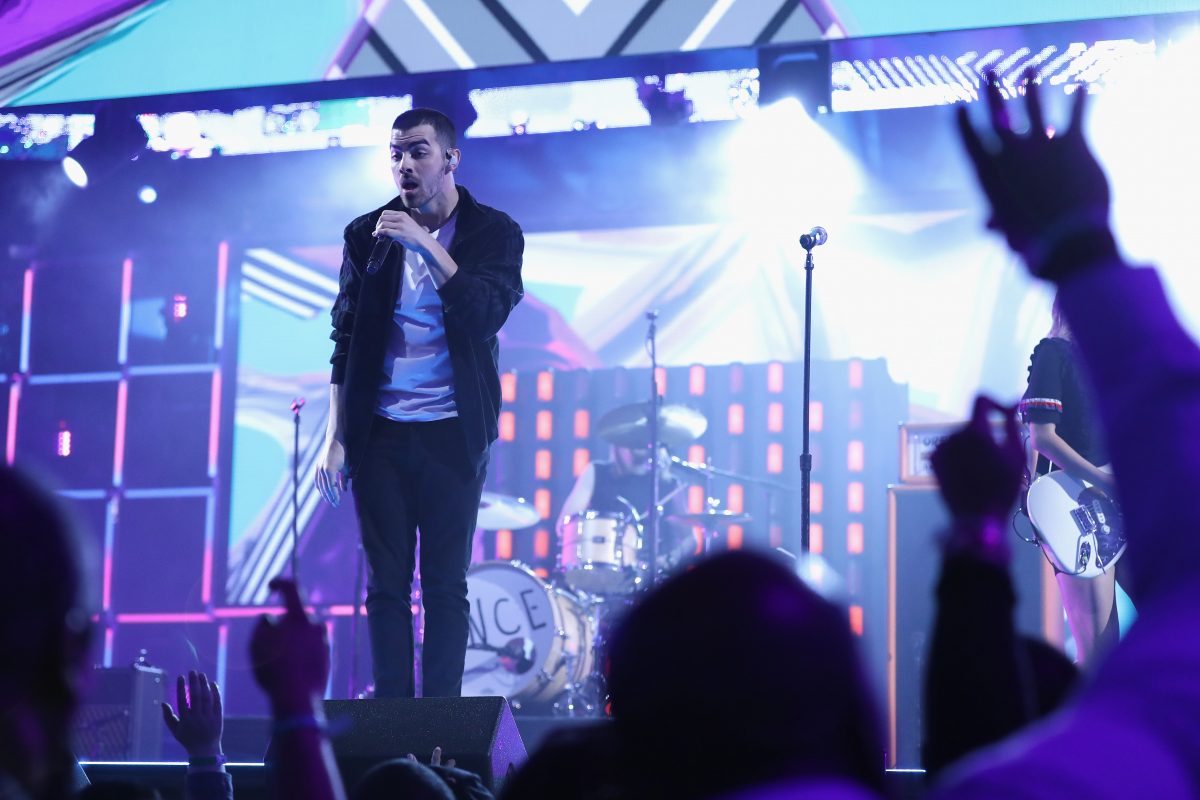 NEW ORLEANS, LA – FEBRUARY 18: Joe Jonas of DNCE performs during the 2017 Taco Bell Skills Challenge at Smoothie King Center on February 18, 2017 in New Orleans, Louisiana. NOTE TO USER: User expressly acknowledges and agrees that, by downloading and/or using this photograph, user is consenting to the terms and conditions of the Getty Images License Agreement. (Photo by Ronald Martinez/Getty Images)

Did you get stage-fright when shooting?
I had an amazing photographer, Yu Tsai. I had seen him work before—he’s done stuff with my brother—so he made it really comfortable and fun. He’s also really helpful. He was doing all these funny poses to get me into it. At first it was a little nerve-racking because you don’t usually walk around in your underwear in front of strangers, but it was definitely an experience to remember.

When else do you walk around in your underwear?
It’s rare! I guess after shows with the band…and when I’m home alone. It was definitely new for me.

How many pairs of underwear do you own?
I own about 10.

That’s it?! The average woman owns 34 pairs.
See, men don’t count their underwear! I also tour all the time, so I’ll go through like 10 T-shirts and wash them, because you can’t carry a ton on a plane. Let’s actually meet at 15. 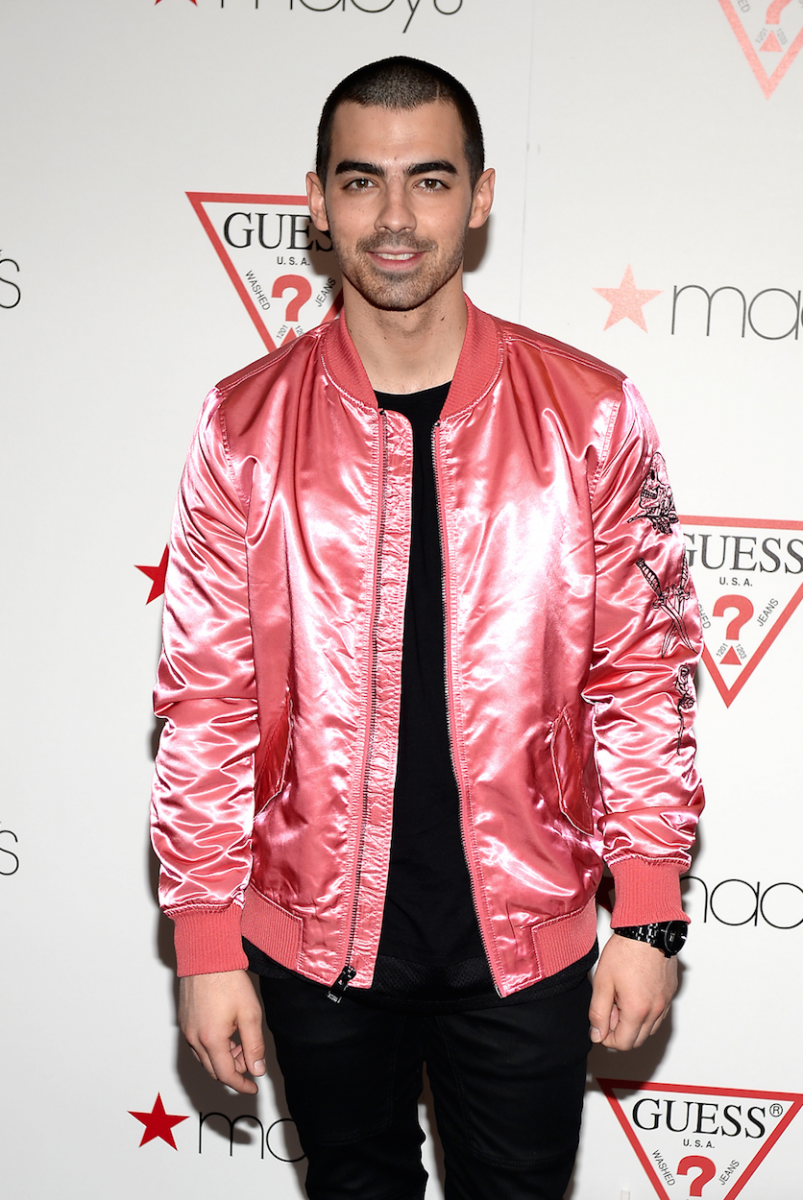 The campaign has been everywhere. Have you seen it as much as we have?
I was shocked by how much it’s been around, internationally, too. I’ve seen people tagging me on Instagram in countries where I had no idea it was. I found it at a London store when I was just walking down the street. It’s cool. I didn’t expect it to be as massive!

Your brother Nick [Jonas] has also modeled. Who’s the most competitive brother?
Nick is very competitive, and that goes into a lot of aspects of who he is. It’s a great thing for him. He’s always been the athlete of the family. On tour when we’d have a day off, he’d want to play softball and go to batting practice, and the rest of us are like, Dude, it’s our day off! We just want to sleep, walk around the city, and maybe go to a bar. And he’d be like, Fine, but you’re never playing with me again. 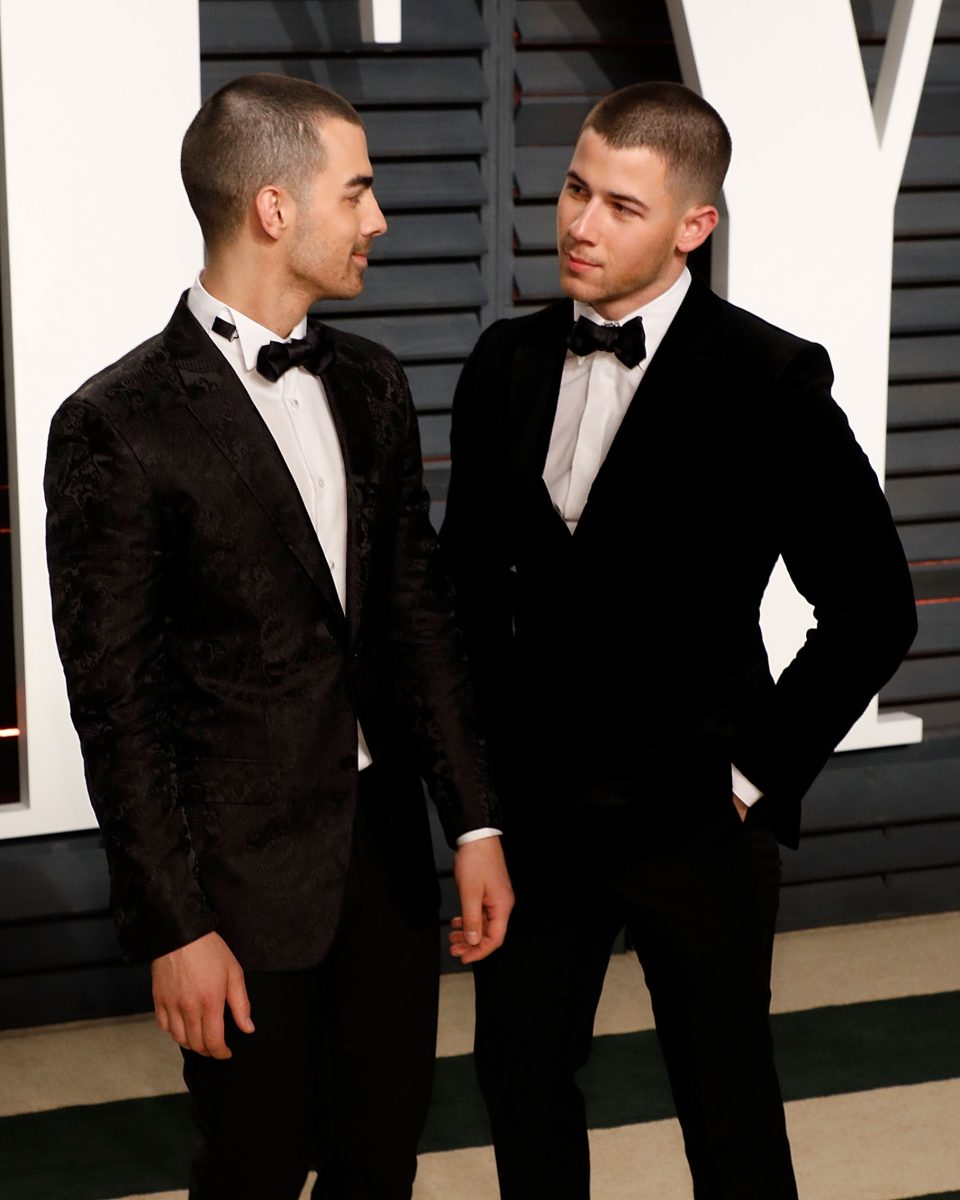 We’re at Macy’s….what’s your favorite float in the Macy’s Day Parade?
My brother and I have been able to go on a few floats during the Macy’s Day Parade, back in the day. We have a soft spot for Build-a-Bear—I think we were on it twice—and when I was younger, I always got excited by Santa Clause. 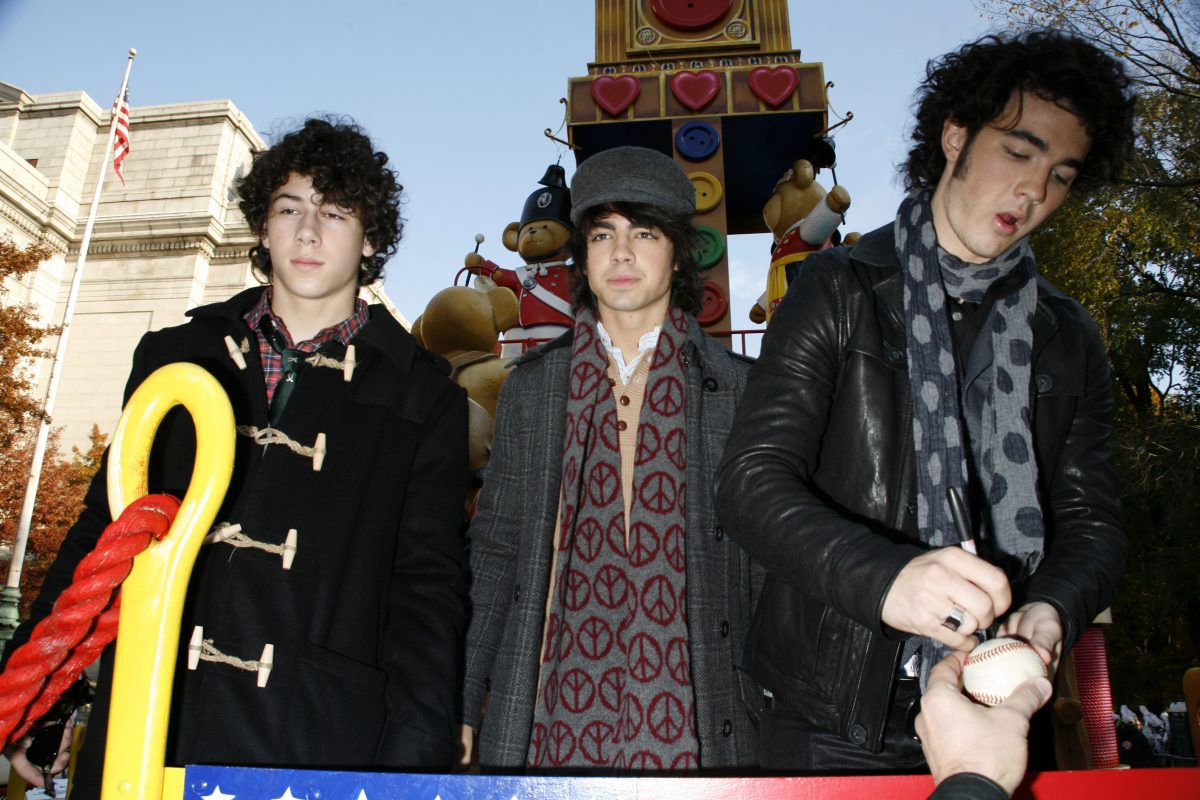 Let’s play a GUESSing game. When was the first traffic light built?
I want to get this! I need think about when cars were built…I’m going with 1955.

GUESS Gets Into the Athleisure Game