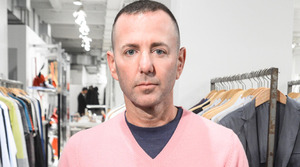 (NEW YORK) It’s hard to believe it’s been a decade, but Jeffrey Cares is celebrating their 10th anniversary this year with a fashion show, silent auction and, of course, cocktails, all for a few deserving causes. What started out as an event at his now-iconic 14th Street store has turned into a must attend/must-look-fab bash on The Intrepid. The Daily caught up with fashion pioneer Jeffrey Kalinsky of Jeffrey Fashion Cares as he gets ready to hit the big 1-0 next Tuesday. This year Emmy Rossum is the celeb co-host and Broadway’s Jerry Mitchell is being honored with the Community Leadership Award presented by his Kinky Boots collaborator Cyndi Lauper. P.S. Tickets are still available! BY EDDIE ROCHE

What’s the backstory behind Jeffery Cares?
The original mission, which is still the mission today, is to raise the most amount of money for the beneficiaries by spending the least amount of money on the event, which is something that is really important to me and very difficult to do. We’ve been pretty good. I don’t think we’ve ever spent more than 15 cents on the dollar, so at least 85 cents of your money will go to the charities for every dollar you donate.

Amazing! Which charity benefits from the event?
The Hetrick Martin Institute runs a high school for lesbian, gay, bisexual and transgender youth. They also have services for kids who don’t necessarily go to the school, but come after school to get clothing, wash their clothing, and get food. So they service a lot of homeless youth as well.

Has it always been the same charity?
Yes. When this started 10 years ago it only benefitted Hetrick Martin and Lambda Legal, which fights for our human rights. It still benefits both of those charities; the third beneficiary is ACRIA (AIDS Community Research Initiative of America). They do a lot of research and work around HIV and AIDS. Lastly, we give a predetermined amount, though not an equal beneficiary, to support a scholarship fund for one youth who’s going to college with The Point Foundation.

What was the first event like circa 2003?
It was in the store, and was really done on quite a shoe string. In a lot of ways, I’ll always remember [the first event] the most fondly because my entire staff in the store really came together to make the event happen. There weren’t a lot of co-chairs; there wasn’t a big host committee or a committee working on it. It was really all hands on deck from people working in the stores and reaching out and getting clients there. We didn’t raise obviously the most amount of money the first year but it has so much heart behind it and still does.

Did the event become too big for the store to hold it?
It was great the first year, but then it needed its own proper venue. For the next few years, we held it at Milk. They actually donated the space, which was wonderful. We eventually outgrew that space, moved to it to Epsace, and then outgrew that space. Next, Dan Rothmann, Todd Sears and Chris Wile, who were all chairing it at the time, wanted it on the Intrepid. I really did not want it on the Intrepid. I don’t know why. It scared me! I didn’t really have the vision for it. When we finally did it there, I remembering thinking that I was so wrong and they were so right. It was unbelievable. Who would’ve ever thought?

Your goal this year is to raise $1 million for the event. Are you losing sleep over that?
No, I’m not losing sleep. I just think that one day we will achieve raising $1 million. I don’t know if it’ll be this year. But I think you have to give yourself a goal and we’re just approaching a point in this where that needs to be our goal even if it takes five more years to get there. It’s all dependent really on big donations and they are hard to come by.

How did you handle things when the economy was in leaner times?
Well thank God this event was in its growing state. Every year, no matter what the economy is like, you can always try your hardest. And if we try our hardest, whatever we come up with is what we come up with, especially if we watch our spending. Now, if we try our hardest and all of a sudden spending goes up and there’s no good reason for it, then I think we’re failing.

Why did you pick that location?
I signed up for the space and for the land. I Ioved being near the water, and I still do. The neighborhood seems to be a huge destination for anyone coming to New York now. Wherever you are all over the world, you talk about the Meatpacking District and people know what that is.