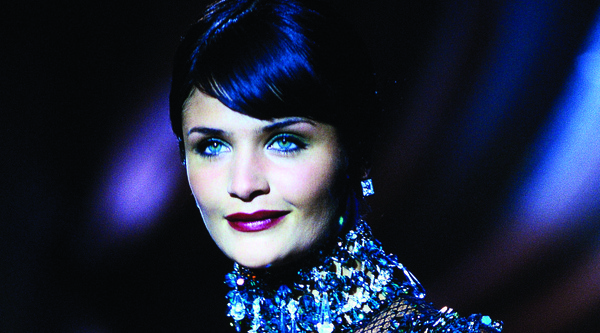 (NEW YORK) Helena Christensen will always be remembered for her beauty, but she’d also like to be known for her art. Last week, she kicked off her new role as “global explorer” for Starwood’s luxury hotel collection with a photo exhibition, “Visual Journey, Peru,” at the Bleecker Street Art Club. If you see her there, don’t mention the “S” word.
BY EDDIE ROCHE

You started modeling at 19.
I went to Paris with a baby face and a bad perm to give it a try… I had planned for it to be just a week-long holiday traveling in Paris, but my booker, Veronique Rampazzo, who I’m still with, sent me out for a few castings and I got a Valentino show. Soon after, I was working with Peter Lindbergh and Karl Lagerfeld. British Vogue was the first major editorial. I was very lucky.

How so?
Appearances are in the eye of beholder. They could have looked at me and thought I was a chubby teenager, because I was. My face was chubby, but they thought I was photogenic, and said, ‘Let’s take a chance.’

How long have you been with your booker for?
I’ve been with Veronique for 25 years and my English agent Gavin Myall for 18 or 19 years. I worked every single day in my twenties so my agents became more like guardians to me, in a way. They’ve basically become family.

What do you think when you look back at the supermodel days?
I can’t imagine any other job giving you such an intense experience on so many levels. It’s a three dimensional experience. It’s an emotional experience, an artistic one, and a cultural one, because you’re traveling to places you might have never gone to, especially at such a young age. If it comes naturally to you to have your photo taken, that’s not the hard part of this job. Being alone, being jet-lagged, and the physical side of it can wear you out, but it was all worth it.

How did it feel, being grouped with Naomi, Christy, and the other girls?
To be quite honest, I don’t feel like we should be talking too much about [that time] because I’ve already talked forever about it. I don’t want to see myself repeating these answers over and over again. That’s already out there.

Fair enough! Tell us about your role with The Luxury Collection.
They approached me and asked me if I’d be part of their team of global explorers and asked me to go to Peru and photograph it. I’ve spent so much time in Peru because I’m half Peruvian and obviously that seemed like a wonderful opportunity. I brought along my mother who hadn’t been back to the country for 17 years. The last time she went was when I did a modeling job with Mario Testino, who is also Peruvian. We were in the desert and we sailed through these islands with the most intense wildlife that I’ve ever seen anywhere. Experiencing that with my mother felt very cathartic.

Do you take your camera with you everywhere?
I do. Absolutely. Even though I see so many beneficial elements to digital cameras, I wish it wasn’t invented in some ways, because I still love carrying my old cameras and film around. I take advantage of digital cameras, but you take so many pictures. You shoot on your phone. You’re not thinking, ‘I’m taking a shot now. I have 23 shots left on this roll. I’ve got to make sure I take a picture of something very interesting.’ These days you just shoot everything; I took a lot of photos on this trip.

You’re donating sales from the show to Oxfam International…
They opened my eyes to Peru in a completely different way when I learned from them about the drastic effects of climate change there. It was a whole new way of looking at a country that I had known as my mother’s home country. Peru is my other country. I feel very connected to it. My roots are from there so if there’s any way I can be part of an organization that helps people adjust to the climate changes, that’s an honor.

You opened the show last week. How was that?
It was a bit of a surprise to me that there were that many people there. I didn’t get a chance to hang out with my friends because there were interviews, there were representatives from the Peruvian consulate there. I’m still mentally taking it in. My son came and it was the first exhibition that he had come to of mine and that was very cool.

What was his review?
He said, ‘This is great mom! This is really great.’ I’ll take that. That was perfect.