Heart To Heart With Jessica Hart 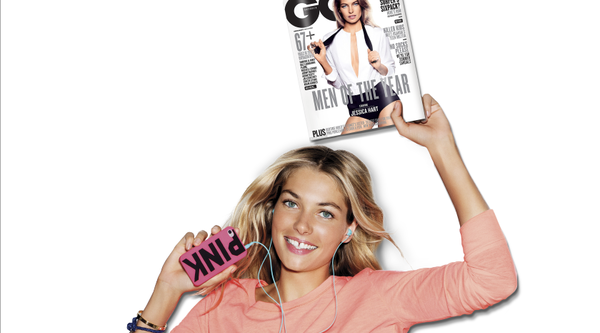 (NEW YORK) G’Day, gorgeous! When she isn’t covering Australian Vogue or strutting down the Victoria’s Secret runway, Aussie beauty Jessica Hart is ripping it up on her BMX and developing a soon-to-launch makeup line.
BY EDDIE ROCHE

Congratulations on your cover of last month’s Australian Vogue!
Thank you! I shot it in Paris with Will Davidson. I love Paris, so shooting it and knowing that it was going to come out in my country was really special. I set my standards high for this year!

What do you do with the covers?
My mom and my agent collect them! My mom is a very big fan of collecting everything that I do. We have a garage full of issues. But I rarely make the effort to get anything [in print] because we’re living in the digital world. I don’t see the need to see it again if I see it online. I don’t want to clog up my apartment with it.

Does it embarrass you that your mom collects all of your stuff?
A lot of things that my mom does embarrass me but that is probably not high on the list. If I went into the garage I would probably be embarrassed for her, but that’s okay! She is just a very proud mom.

What’s on the horizon for you this year?
I have been shooting a lot! The start of this year has been really busy and exciting for me. I also have my own makeup line LUMA coming out in April. I’ve been working on it for about three years and it is all made in Australia, so all the samples have to get sent to me in the U.S., then approved, and changed. It has been a very long process and I am very picky! We’re going to sell it online and in Australian department stores.

Was launching your own makeup line always a dream?
When I was a little girl, I was a real tomboy. I didn’t even know about magazines or fashion. I started modeling at the age of 14, so everything that I grew to know about life, I learned through the industry and that made me develop a love for fashion and makeup. I’ll go on set and the photographer will be like, ‘What is all over your hand?’ I’ll be testing and playing with whatever makeup I can find.

You’ve been living in New York for a while now. What reminds you of Australia in Manhattan?
There is this place called Ruby’s Café on Mulberry Street where you can have Vegemite on toast. They call Mulberry Street “Little Australia!”

Which designers take up the most real estate in your closet?
I have Helmut Lang leather pants, Alexander Wang t-shirts, a Celine handbag; I wouldn’t wear everything from just one brand. There are so many amazing Australian designers too, like Dion Lee who is such a talent. Charlotte Olympia shoes and clutches are my favorite. I probably have 16 of them!

We understand that one of your hobbies is building BMX bikes!
I used to ride them when I was little. My friend in Australia was building one and I was like, ‘Oh my god that is a great idea!’ So I went on eBay to collect parts and over the course of three or four years I have built three bikes. It takes a while because I rebuild vintage ones, so they are all vintage parts from the ’80s, but they are reconstructed by me. So now I have a chrome and lime green one, I have a blue and white one, and I have a pink and black one.

Aren’t you too tall to ride them?
You are meant to be bigger than the bike. I mean I could never flip it, but the idea is that it is a little bike that you ride kind of standing up and if you hit something you can jump over it.

You were named Australian GQ’s Woman of The Year last year. That’s no small feat!
It was really cool. I was surprised because they emailed my agent telling them that I was up for it and then we never really heard back. Then all of the sudden they were like, ‘Yes you got it, you have to go shoot it in New York.’ GQ Australia never puts women on the cover of the magazine except for this particular issue. It was only 20 minutes before the event started that I realized what a huge deal it was. It’s the biggest black tie event in Sydney and I was beside myself.

Do people compare you to Lauren Hutton because of the gap in your teeth?
Yes! I saw her at an event once and she is so cool. She was all natural and cruised in with a backpack on. She’s amazing!

Spotlight On David Helwani, Founder Of Twenty And LaPina