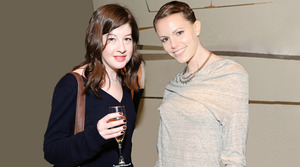 (NEW YORK) A wave of digital editor shuffles over at Hearst to digest: the publishing powerhouse’s Digital Media group has named Leah Chernikoff editor of Elle.com and Amy Odell editor of Cosmopolitan.com, both of whom are scheduled to start their new gigs on September 16th. The new hires have left previous editors, Elle’s Amina Akhtar, and Cosmo‘s Abby Gardner, out of jobs. Akhtar took to Twitter shortly after getting the news, changing her headline to read, “Formerly of ELLE.com. Free agent. Hire me, really,” and also added that she would be, “chilling on the roof with bean and prosecco for the rest of the summer”. Meanwhile, she graciously tweeted a congrats to Chernikoff. Gardner has remained mostly mum on the news, but did take down any mention of Cosmo in her Twitter bio.

Chernikoff comes from Fashionista, where she has been editorial director since June 2010. During her time there, Chernikoff took the site from 250,000 unique visitors to two million in just under three years. Prior to her role at Fashionista, she was a features reporter at The New York Daily News from 2007 to 2010, covered fashion, entertainment, food, and New York culture. She has also freelanced for The Wall Street Journal, Bon Appetit, and NYMag.com, amongst others.

Meanwhile, Odell comes to Cosmopolitan from BuzzFeed where she was editor of the fashion section since February of 2012. While there she launched the listicle and GIF-driven site’s first women’s interest section called SHIFT where she increased traffic to a whopping 6 million unique visitors. Prior to that, Odell was the founding editor of New York’s fashion blog, The Cut, which launched in 2008.

Chernikoff and Odell will both report to Troy Young, president of Hearst Magazines Digital Media. So how big will their new roles be? ELLE.com has reached 3.4 million unique visitors, which is up 26 percent from last year; as of July, Cosmopolitan.com has reached 12.2 million unique visitors. Looks like these two talented ladies are going to have their hands full. Congrats and bonne chance!