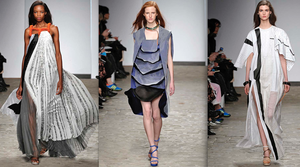 (NEW YORK) Vionnet
Making his debut chez Vionnet, Hussein Chalayan presented his first demi-couture line for the brand, which is now owned by Goga Ashkenazi. Ever the technical master, Chalayan’s designs have often merged technology, science, and architecture. So it comes as no surprise that his futuristic touch was quite a move forward from Madeleine Vionnet’s historical designs. The show opened with several soft, simple bias-cut organza dresses, then onto a couple of looks that in periwinkle and turquoise that were scalloped in the front, and meant to imitate a melting staircase. Chalayan’s influences for the collection included everything from furniture to electrical wire. The latter inspiration took form on pieces like a stunning floor-length B&W patterned plissé cut gown that hung from a harness-like coral collar. Both the bias-cut and plissé techniques were signatures of Madeleine Vionnet’s, but Chalayan found ways to thoroughly modernize those signatures. The show closed with structural black and white dresses, patterned with tiny rows of dots, complete with kimono-style or butterfly sleeves that looked purposefully unfinished and haphazard. These pieces were meant to be a nod to couture patternmaking and the markings on garments to be embroidered by hand. On the business front, Chalayan’s appointment comes on the heels of Ashkenazi’s plans for expansion. The entrepreneur hired Chalayan so she could focus on establishing a Paris hub for the brand, which will also include a store and a museum. Plus, she’s currently on the lookout in New York and London for new store locations and plans to relocate the Milan store, according to WWD. All in all, Chalayan referenced the hallowed traditions of Vionnet, and of couture at large, pieced into a collection that also looked altogether entirely untraditional.

Jennifer Connelly Is Quite Allure-ing