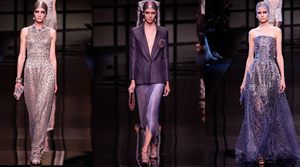 (NEW YORK) Armani Privé
The iconic Italian designer might be fêting his 80th birthday this year, but Giorgio Armani still has his finger on the pulse. His audience tippled on flutes of bubbly prior to his Spring 2014 showing, which concluded with the Paris installation of his One Night Only world tour, celebratory motions and all. Quite the late-night feat, considering Armani’s show was scheduled to begin at 9 p.m. But perhaps all that nocturnal activity offered a touch of inspiration for the designer, as his looks encompassed a night sky palette: midnight navy, dusky blue, wisps of grey, and the silver sparkle of a star.

This time around, Armani wove in silhouettes and styles he’s been mastering for decades: tailored blazers, refined gowns, generously-cut pants, and a subdued allure that is apropos for red carpet darlings, career mavens, and everyone in between. The collection, titled Nomad, took the Armani DNA and added a bohemian touch, as provided by the headscarves that accompanied each look. A delicately pleated champagne gown, which featured a casual neckline, was ornamented with a bevy of sparkly adornments, concentrated on the waist and the hem. To push the bohème envelope, there was also a sheer tulle top, relaxed through the shoulders, covered with beads and paired with a lavender floor-length skirt. Also on the skirt front, a draped tulle number got structured thanks to a blazer topper, while a light silky piece emulated pleats. A checkered silk jacquard skirt offered a generous slit for a subdued pop of sexiness. And then, there were the evening gowns: a smorgasbord of lace, sparkles, and an array of silhouettes. That strapless ball gown that was smothered in a mix of embellishments and adornments was breathtaking, finished off with a full lace skirt. A blouson dress got decked out with pale blue and green stripes and paillettes all over. Mr. Armani’s 54 looks covered all the bases of getting dressed past sunset, whether for a black tie gala or an intimate dinner party. dont click