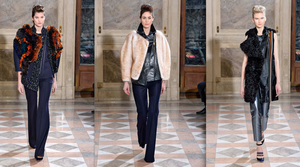 (NEW YORK) Bouchra Jarrar
Having just received the official haute couture appellation only a month ago, Bouchra Jarrar proved that she’s more than worthy of the honor with this season’s standout collection. Jarrar is known for her expert tailoring, not for a parade of ornate evening wear, and thus, there were only three gowns in the collection. Each ultra-minimalist satin gown was devoid of the embellishments, draping, and nipped-waist peplums seen on the other couture catwalks.

The focus here was the outstanding outerwear, like the hand-dyed pheasant plumes that adorned the arms (and the chest, partially) of a beaded asymmetrical zippered jacket that was paired with simple black wide leg pants or a to-die-for leather zippered moto with light champagne-colored fur that covered most of the jacket except the color and panel closure, also worn with simple wide-leg black pants. Then, there were the array of vests throughout the collection, like a purple-ish blue tweed made from strips of vinyl interwoven with metallic threads, giving off a shimmery effect. A mixed fur black vest zipped to one shoulder with a panel sporting two simple stripes. Both toppers were paired with slim silver metallic pants. In short, the collection was cool, and elicits that “must-have” sensation every designer ultimately hopes their audience will have.