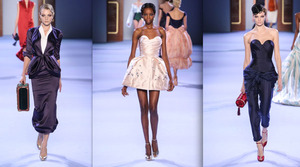 (NEW YORK) Ulyana Sergeenko
Up for an exotic Couture jaunt? Ulyana Sergeenko took her audience on the Orient Express, complete with train sounds and a set to match. But in the Russian designer’s fourth go at the Couture circuit, she also took viewers to the Silk Road, materially speaking. The first silk look was in the form of a soft plum jacket and skirt, anchored by a white shirt, which was followed by the sumptuous material turned out in every jewel tone imaginable, accented with paler hues. In contrast to the more casual inflections shown by Couture’s heavy hitters thus far, Sergeenko opted for full-on glam, complete with finger waves, smoldering eyes, and teetering heels.

Sergeenko perfected the art of the bustier in all forms: strapless and paired with a silk robe and cuffed pants, cropped and embroidered with a salmon skirt, and spiffed out with a forest green peplum. Her spate of gowns were strong, like a cropped ballerina gown in the palest of pinks with a trail of buttons down the front, and a navy dress with feminine draping at the hips and a leaf motif at the shoulder. She didn’t forget the boys, though, sending two male mods down the runway sans shoes, a fact that was highlighted by straight pants cuffed at the ankle. Also of note: Sergeenko’s play on volume. A white tulip dress was crewnecked, with just the right dose of hip accentuation. Meanwhile, a baby blue tuxedo dress was finished off with a cloud-like hem, dotted with red flowers and lined with ankle-skimming pants. J’adore!