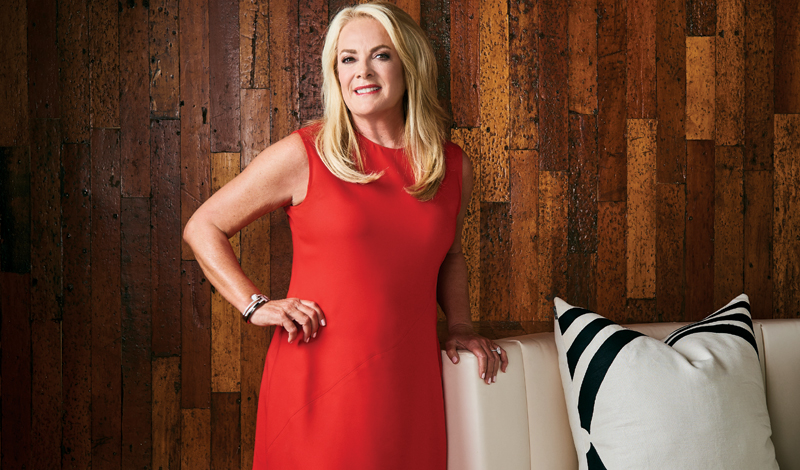 A Pamella Roland gown has promised supreme fit and a certain luxe factor since the brand’s inception 15 years ago. The secret to success? Founder Pamella DeVos’ no-nonsense approach to business and her global quests for creative fuel, which take her from Monte Carlo to New York City.

Welcome back to New York! What’s new?
We’re preparing for the show, and a few days later my daughter gets married [in Michigan].

Are you designing her gown?
Gowns! And the bridesmaids’ gowns and my own dress. When I got married, I had the puffy-sleeved wedding dress. It was the ’80s! [Laughs]

What’s the story behind your Fall collection?
My inspirations are usually travel and art. This year, it’s inspired by a trip my family and I took to Monte Carlo and the Grand Prix. It was spring, and there were flowers everywhere. I was driving my husband nuts with all the pictures I was taking!

What else was on the calendar this summer?
I’m the vice president of the board for the Whitney Museum, so the gala is my No. 1 thing during the summer. I also received an award from the Joyce Theater and the Joffrey Ballet. And I just saw Lady Gaga at Wrigley Field in Chicago, which was great!

Your kids usually join you for your runway bow. Have they taken an interest in fashion?
Sydney, my younger daughter, has taken the most interest. My son, Cole, plays hockey, and that’s all he cares about. [Laughs] My oldest daughter, Cassandra, is a lawyer, but we’re looking into working on a home collection together.

You launched your label later in life—when did your interest in fashion begin?
I didn’t create the brand until after I had children and moved to Japan [for my husband’s business]. I’d always had an interest in fashion and the arts. When I was a young girl, my mother would buy me supplies, like oils. My father had a fit when he thought I was going to an art school! He told me I’d never make money. So I studied business at Michigan State University, and I’m happy I did. Some people who don’t have that training don’t understand that it’s important to keep your doors open. I think that’s why I’ve been around for 15 years.

Does the brand today resemble what you set out for it to be?
Not at all. I never thought 15 years down the road I’d be doing this. Neiman Marcus bought our first line and it just took off. It began with sportswear and day dresses and a couple of gowns. Women were telling us it was hard to find gowns that fit well. We really worked on that, and found that we were selling. So we slowly got out of sportswear, and today, we create more cocktail dresses and gowns.

When was the first time you saw one of your gowns on a red carpet?
I won the Gold Coast Award, and I was in my hotel room in Chicago waiting to go onstage. The Emmys were on, and it was the last year of Sex and the City and Kim Cattrall was up for an award. She was on the red carpet in one of our gowns, and we were just screaming! Megan Mullally from Will & Grace also wore one of our pieces, and she won that year. A few people actually call me Karen—I can be goofy. [Laughs]

Who’s buying the line?
It’s always kind of been the same customer. We dress the daughters, the mothers, the grandmothers—all ages. Recently, more stores overseas have picked us up. That customer is different, so we’re showing more beading and opulence than before. It’s not just clean lines anymore—people are having fun with fashion.

You’re based in Michigan, but have you ever considered moving to NYC?
All the kids are out of the house, and my husband and I travel all the time and we live part-time in Chicago. If I moved here, it wouldn’t be with my husband because his work is in the Midwest. It would be just me and the dogs, Manolo and Hemingway. [Laughs]

You travel often—is there a traditional trip?
We go to Capri quite a bit. The next trip is to Papua New Guinea in the spring. I don’t know how we ended up going there [Laughs], but I’ve heard it’s amazing. We check out new places quite a bit. My family is adventurous. Anything they can jump off, they’ll jump off. They actually made me bungee jump off a bridge. I had tears coming down my face and I was scared to death, but I did it.

Wow! So how are you celebrating your brand’s 15th anniversary?
We always celebrate! It usually involves vodka. We have fun here.

Over a dozen shows later, what have you learned?
People have always told me I’m pretty calm during the show. But what else can you do? We have a no diva policy. My famous line is, Have you ever raised teenage daughters? Compared to that, this is nothing.

Nickname: Pammy or P
Musical inclinations: “I played the violin when I was a kid.”
Pet peeve: “The drama queens!”
Style icon: “I’m a huge Princess Diana fan.”
Travel essentials: “Spray water for my face, these really weird socks, and scrubs that I got from a friend who works in a hospital. I wear them on really long trips.”
In my purse: “Probably 20 tubes of lipstick. It makes my handbags very heavy!”
In my office: “A chair with Brad Pitt’s face on it from a photographer friend, Jennifer Graylock. She knew I loved Brad Pitt. But I don’t let anyone sit on him!”

Jamie Mizrahi on Her First Collection for Juicy Couture

4 SCAD Grads Ready to Make Their...