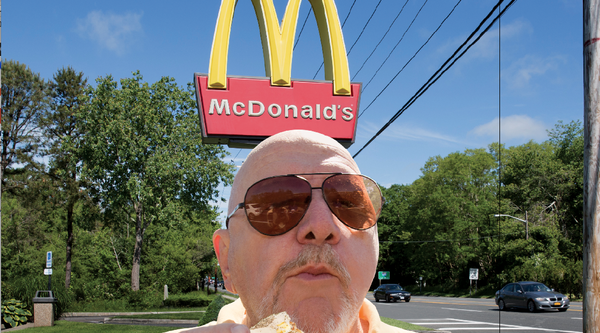 (NEW YORK) Ad-biz hall-of-famer turned Page Six “kerfuffle” artist Jerry Della Femina has a surprisingly intense relationship with the Golden Arches. For the past several decades, in fact, he’s been unable to pass exit 70 on the LIE without stopping in for an Egg McMuffin. And no, we’re not making this up. Here, the outspoken 70-something Long Island icon comes clean about his routine.
BY EDDIE ROCHE

Tell us about your McDonald’s ritual.
When you’re stuck on the Long Island Expressway, you have to have a goal. Mine is a Sausage Egg McMuffin in Manorville. The problem is, McDonald’s stops serving them at 11 a.m., and I start racing like a maniac to get there. Sometimes you get there literally a minute late and the sign comes down and they’re only serving hamburgers. The disappointment is incredible. The problem is, they don’t sell this thing 24 hours a day.

There’s a rumor they’re considering it.
That would be sensational! It would change my life! I’ll have two of them instead of one. The McMuffin has everything Mayor Bloomberg says is bad for you. Everything that he says is bad, I go after as fast as possible.

It’s not exactly the healthiest breakfast.
I have no idea how many calories it has. I won’t look at their chart, because it’s too good to give up for calories. A lot of people have tried to knock it off, but they can’t because they don’t have the egg.

Do you think it’s from a real chicken?
No. Nothing is. Nor is the sausage from a pig. Who knows where this stuff is from, but it tastes good!

Do you remember the first time you ever had a Sausage Egg McMuffin?
Of course! I’ve had them all over the country. I have my phone set up so I can click and find the closest McDonald’s. The worst was once I caught myself doing 90 mph to get there because there wasn’t enough time. I said to myself, “You are going to die to get a Sausage Egg McMuffin?” I’ve eaten at some of the greatest places in the world, and nothing comes close to a Sausage Egg McMuffin.

If you were to come up with a slogan or a campaign for the Sausage Egg McMuffin, what would it be?
Words fail me.

Where are you and your wife, Judy Licht, living these days?
Sag Harbor. When I sold the restaurant [he owned Della Femina in East Hampton until 2011], it was interesting, because I owned it for 19 years and that was where I would spend every Friday and Saturday.

Do you still love the Hamptons?
It’s wonderful. People complain about the length of the trip and I say, “You’re in the car and you are alone or you are with people you love, listening to music, headed to the most beautiful place in the world. What’s wrong if it takes an extra half-hour? It’s worth it.”

What about the trip back?
I’m a B personality and my wife is an A personality, so I try to get her to fall asleep by playing the right music. I have a jazz music program that I put on. She is gone in the first half-hour. I find myself being in public so much, and I like people, but it’s just nice to be able to think of nothing. You’re just staring right ahead and worrying about cutting in and out.

Do you remember the first time you came out here?
I came out with my first wife and we took a room in Hamptons Bays. I heard crickets and these night sounds, and I said, “I hate it here. I have to get out of here. I cannot stand these little creepy sounds!” Then we started renting places, and I got over my hatred of crickets.

You’re still working. Ever think about retirement?
Retirement is death. When people retire, they lose all excitement in their life. It’s the same every day. You have to have something. I’m interested in going into the consulting business, because I think that it’s the future of advertising. I’m not afraid to fail. Hopefully I’ll fail a couple more times. It means I tried. I started out with zero dollars and nothing at all. I came from an area in Brooklyn that wasn’t the best, but it was the best place to grow up. I’ve been very lucky. I’ve had the opportunity to do a lot of things. I have all of this, and Sausage Egg McMuffins!

Are you proud of yourself?
Yes. I’ve achieved a lot within my business. I have had thousands of people working for me, and I feel I’ve made their lives better. Everybody who has ever worked for my company says that it was the best job they ever had. I don’t believe in telling people what to do, especially in the case of the restaurant. These guys are skilled people at what they do. Why on earth does someone come in and say, “I know more than you do about food,” and tell them what to do? Everyone at the restaurant loved that. I like the way I’ve dealt with my employees at the agency and the restaurant. That’s something to be proud of.

Was Mad Men based on your agency?
I wrote a book about advertising called From Those Wonderful Folks Who Gave You Pearl Harbor. A lot of the stories in my book have shown up on the show, but I don’t think Mad Men is based on anyone. It’s based on a whole group of people. I helped them out in the beginning a lot. I did PR and a lot of promotion for them.

What do you think of the ad biz these days?
It’s changed a tremendous amount. There’s less respect for advertising people now than there was before. Years ago, if I had an account, the person I would be dealing with was either the president or the chairman, because they were interested in advertising. Now no one gets to talk to them.

Do you think you would have been able to have the same amount of success if you’d started in the game today?
No. I would have been a total failure. The playing field changed. Now there isn’t as much humor or fun. We were whacked out. The Seventies and the Sixties were a time of fun.

Was there as much drinking and drugs as they say?
Oh yeah. Primarily grass. There was the smell of grass in the office almost all the time. It was the Sixties. I used to always encourage people to get involved with each other sexually, because they would get into work earlier and leave later. I would benefit from it. Then we became politically correct, and that changed the atmosphere an awful lot.

How do you define “politically correct”?
People not being able to express themselves. I’m not talking about people acting badly, but there was a time when you would walk in and say, “Hey, that’s a great dress!” And you meant it. Now you can’t say that. There’s a whole generation of people who grew up not knowing the fun of that looseness. Human Resources destroyed the world. The Sixties were a wonderful time. It was about rebellion, and maybe I’m about that. Within my agency there were about 15 to 20 couples who wound up getting married. Now they wouldn’t have been able to talk to each other. There was a lot of sex in the agency. We didn’t care what people did: Sex, color—nobody cared. Now people are legislated not to care. That’s the difference.

What campaigns do you like these days?
Geico is terrific! There isn’t much else that I like. Car ads have been disastrous. They just show pictures of cars going down the road. There’s no thought behind it.

You and Judy have been married for 30 years. What’s your secret?
We haven’t killed each other.

Remind us how you met.
She came to interview me for a nasty story. She usually doesn’t do that, but she called  me a huckster, so I had to get even and marry her.

The Latest on the Shanina Shaik, Tyson...

The Daily Roundup: Could Chanel’s Next Show...