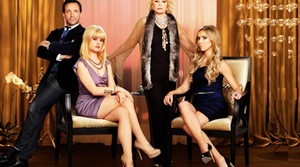 In court case news #1,849…Eight writers from the E! television show Fashion Police, hosted by Joan Rivers, have filed with the California Division of Labor Standards Enforcement office claiming E! owes them over $1 million in unpaid back wages. (Wowza!) The network responded with a public announcement yesterday: “E! values our Fashion Police writers and we pay them fairly and in full legal compliance.” Let the games begin.